A while back I received some presents from the fine folks over at Backcountry Research (you know, makers of the now famous Awesome Strap.)  I’ve been testing a few of the items in question, now it’s time for the results for one of them. 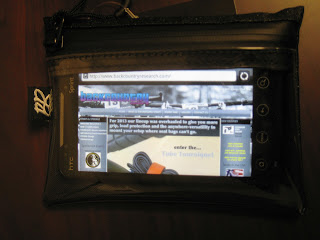 This was an item I never thought I would need, but it turns out that I did very much.  I’ve been using the Fönbag for a little while now, and it’s been on plenty of rides with me during that time.  I freaking love it, and I have no idea how I’ve been riding without it.  It keeps my smartphone safe and sound in its little protective case, so I don’t have to worry about anything happening to it.  I’m pretty rough on things, and I’ve been known to drop my phone a time or two.  Carrying it in my pocket during a ride made me nervous, but with the Fönbag I worry a helluva lot less.

Besides protecting the shit outta my phone, the fancy clear protector allows me to actually use my phone during my rides, so I can update my Face status, Twitter, and even participate in the newest form of cycling fun, Strava Terrorism.

Check out this post over at Drunk Cyclist and join in on the fun.

Anyway, There’s not much exciting about my review of the Fönbag because well, it works.  No frills, no fuss, just a very practical (and stylish) accessory to take with you for your rides.  If you haven’t been over to Backcountry Research lately, then you should.  Get yourself some cool shit to help make you awesome like me.

I have a few other things to review, but I’ll save that for later.

Speaking of saving things for later, I have some new sponsor news too.  I’ll hold off on that one though for the time being.