It was officially yesterday.  Today is the “recognized” holiday (meaning that banks, schools, the Post Office, etc. are closed), so I guess today would be a good time for a post about it.

I enlisted in the United States Army back in 1989 (when I was still in high school), shipped off to basic training just a few days after Saddam invaded , spent some time overseas, and when it was all said and done I gave the government eight years of my life.  I loved being a soldier, and it was what I wanted to do ever since I was a little kid. 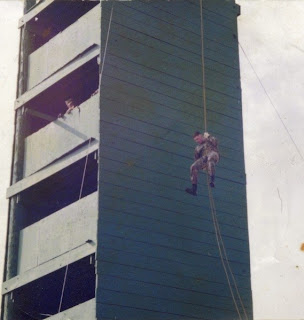 I eventually decided not to make a career out of the military, but those eight years helped shape me into the man I am today.  I probably wouldn’t be worth a damn if I hadn’t enlisted in the Army, and I am thankful every day for the experience and the lessons I’ve learned.

Throughout my life I’ve known many veterans, including family members, cycling friends, coworkers, and neighbors.  They served in wartime and during times of peace, and the connection we all share is something that I cherish.  So with that, I want to offer a big thanks to all my fellow veterans young and old.

“The object of war isn’t to die for your country, but to make the other bastard die for his.”

Back to bike stuff tomorrow.