Not Much Time For Bikes

Since my Saturday adventure at DuPont (which I went on and on about the last three days), I haven’t been on the bike.  It’s not for lack of trying, but things have been busy.  Okay, not that busy, but I just haven’t been able to get out after work like I normally would.  Last night, there was a scheduled Halloween ride at one of the local trails, but I had to miss it.

I had something uh, better to do. 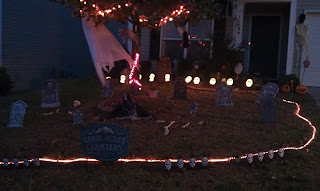 Yeah, I decorated the house and yard once again and stayed home to give out candy.  It was nice to sit out in the driveway, drinking beer and watching all the little trick or treaters stop by begging for candy.  We didn’t get as many kids as I thought we would, but it was still fun.  It’s the one night a year I actually like sitting around the house and watching other people do stuff.

So now, I have a dilemma.  I have a bunch of extra candy (I always buy way too much), and I buy stuff that I like just in case I have some left.  That’s bad news for any kind of offseason training plan, because it’s possible that I’ll eat all of it and pack on the pounds earlier than expected.  I have to fight the temptation, even though it should be easy.  I don’t want to put on an extra twenty pounds this early in the offseason (or ever, actually.)


The only way to get around that is to a) bring it to work and watch everyone else get fatter, or b) ride my bike a helluva lot more so I don’t have time to eat that shit.

I think I’ll choose option b.

Tonight, I’m getting in a night ride over at BYT.  It will be a little chilly, but I’m sure it will be better than sitting around stuffing leftover candy in my belly.  There is a meeting for our local club, the Tarheel Trailblazers, and riding will keep me busy until the meeting starts.  That way I can hang out there and drink beer without feeling bad about it.

You see, I’ll make it come down to beer or candy this offseason.  And if you know me even a little bit, you should know that beer will always win.

I know how much you love beer - obvious by your blog LOL - but candy would have been a smarter choice. Alcohol decreases your body's whole lipid oxidation (fat burning ability) by almost 80%, increases your appetite AND lowers your testosterone levels for up to 24 hours after you finish drinking. So everyone may end up watching you get fatter, instead of the other way around. :)