I Shoulda Stayed In Bed 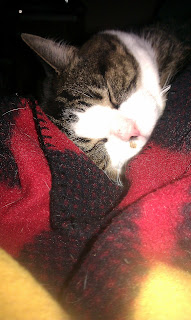 This is one of those days where I feel like I shouldn’t have to go to work.  I have to make money to pay for this obsession, er hobby of mine, but I just didn’t feel like getting up today and starting my day.  It’s cold outside, and I would rather stay in bed for a while until it warms up.  I don’t have any excuses, other than the fact that I’m just a wee bit tired for no apparent reason.  It’s not like I stayed up late drinking last night or anything.

No, last night I rode my bike after work.  It was dark, I had lights, and it was fun.  I organized a group night ride at one of our local trails, which was my attempt at helping our club be a little more social.  We had a few guys show up, and we took to the trails in the cool night air for some hot night laps.  I really should do this shit every day after work.

There was something else going on last night too.  In addition to a planned night ride, there was a race at the same park.  It wasn’t on the trails though, because it was a cyclocross race.

Yeah, cyclocross.  I don’t do it, don’t have any plans to do it, but someone I know got out there to do it. 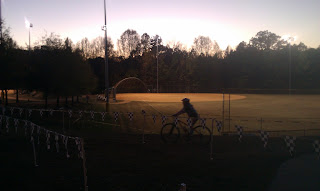 That’s Little Miss Sunshine.  Since she doesn’t have a cross bike of her own, we had to make her geared mountain bike a little more “cx friendly.” 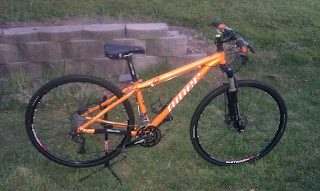 To quote the great Han Solo, "I've made a lot of special modifications myself."  Okay, I only made one modification, and that was to put a set of cross tires on there.  It seemed to help with the handling out there in the grass, even though I think it looked weird as shit.  She dug it, and got out there to race with the rest of the dirt roadies. 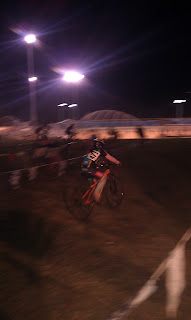 It’s kinda fun to watch, but I think about cyclocross I keep looking for stuff like this:

Now, that would have been really entertaining.

It sounds like it was a busy night, but it wasn’t.  Getting out after work to ride my bike and hang out with other cycling-types is how I want to spend every evening, but unfortunately I can’t.  Maybe that can change, but for now I’m just too busy.

This weekend won’t be busy at all.  As of now, I have no definite plans.  I tentatively have two rides planned, but I’m not sure about the details right now.  Most likely it will involve riding at Backyard Trail, and hell, I could end up there both days.  There is also some trail work planned for both days that I may or may not attend.

Shit, my weekend is filling up already.  Maybe I’ll just stay in bed where it’s safe.

I really love how she declares "I think Joey is OK" just before the guy calls for the medic - classic!

Well, now we know who the BADASS is in the family!!! And she's rockin' skinny tires, too....

You do realize they have FREE BEER at 'cross races, right?