Saturday morning came early.  Mostly because I stayed up well into it, but whatever.  Since we had a few day trippers coming out to ride with our camping group, we gathered up ourselves and rolled across the street to the Ranger Station and prepared to break off into groups to ride The Pisgah/DuPont. It was decided that their would be two rides:  a Pisgah Death March, and a tamer, social-type paced DuPont ride.  I thought a tour around DuPont would be fun for those folks that wanted to have a good ride, see some scenery, and not be too tired to do anything else later in the day.  So yeah, I led that one, which meant that a bunch of us drove ~8 miles away to meet in another parking lot. 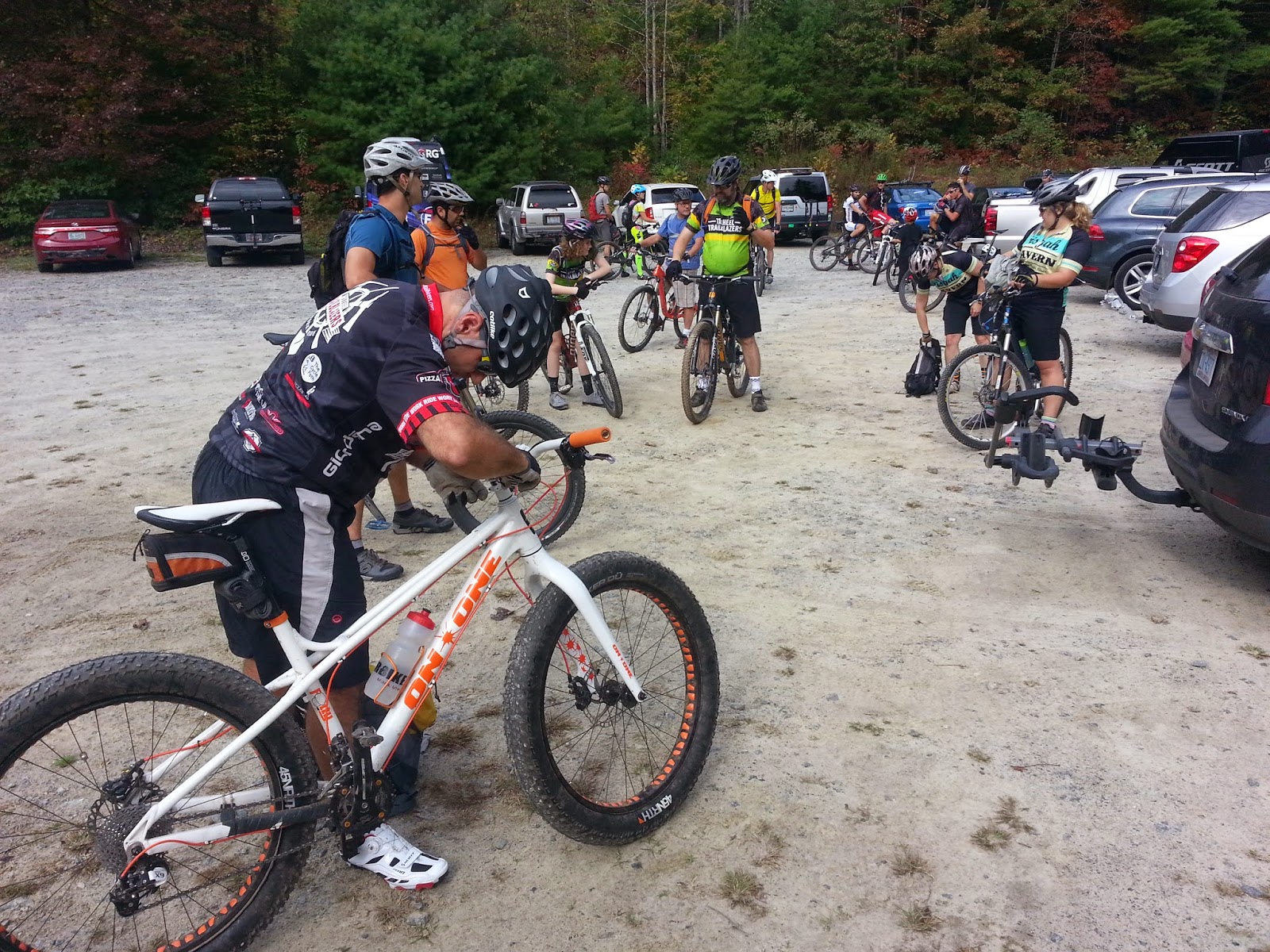 The ride was meant to be easier, but we had to start out climbing.  Most folks didn't seem to mind. 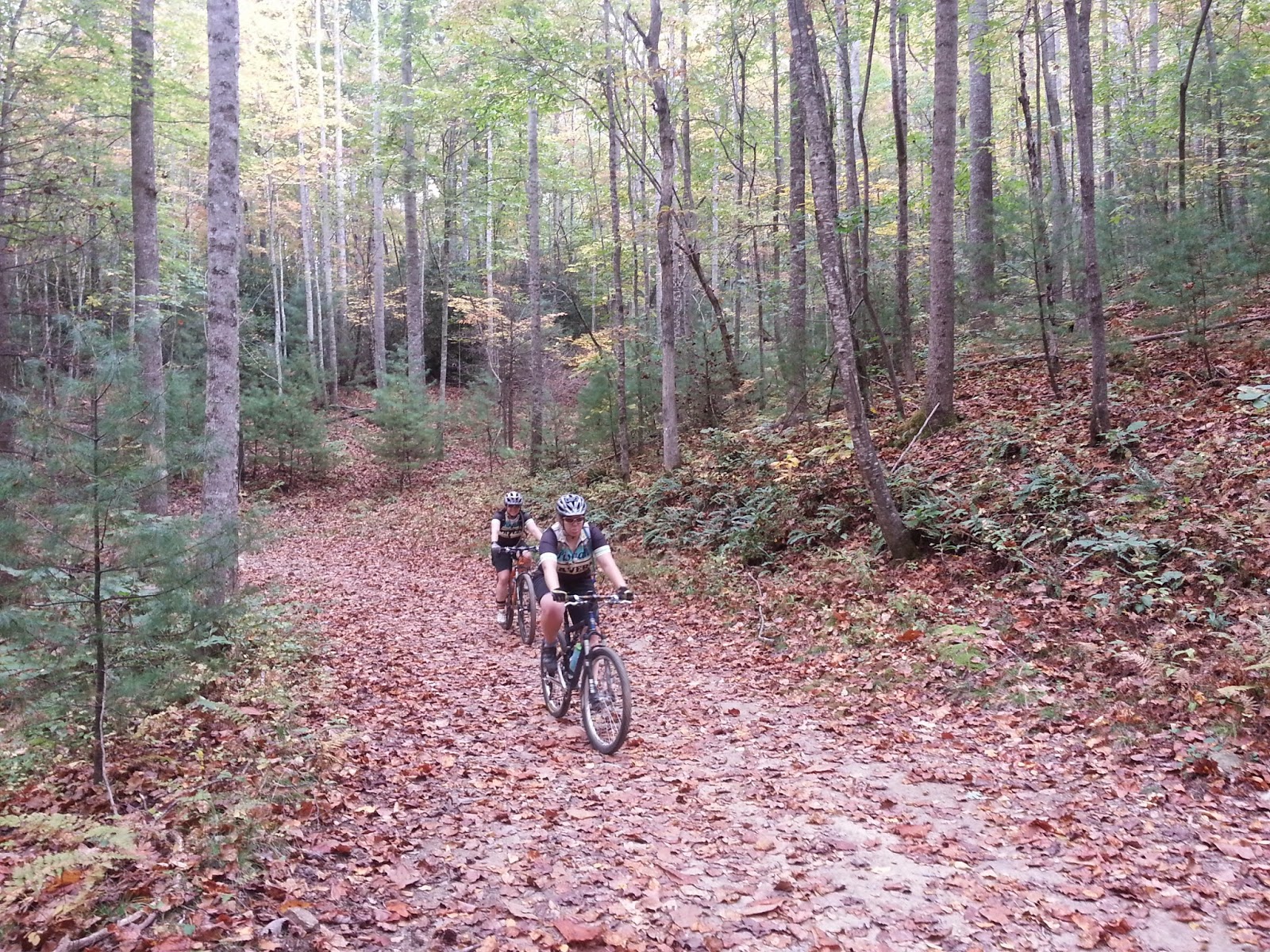 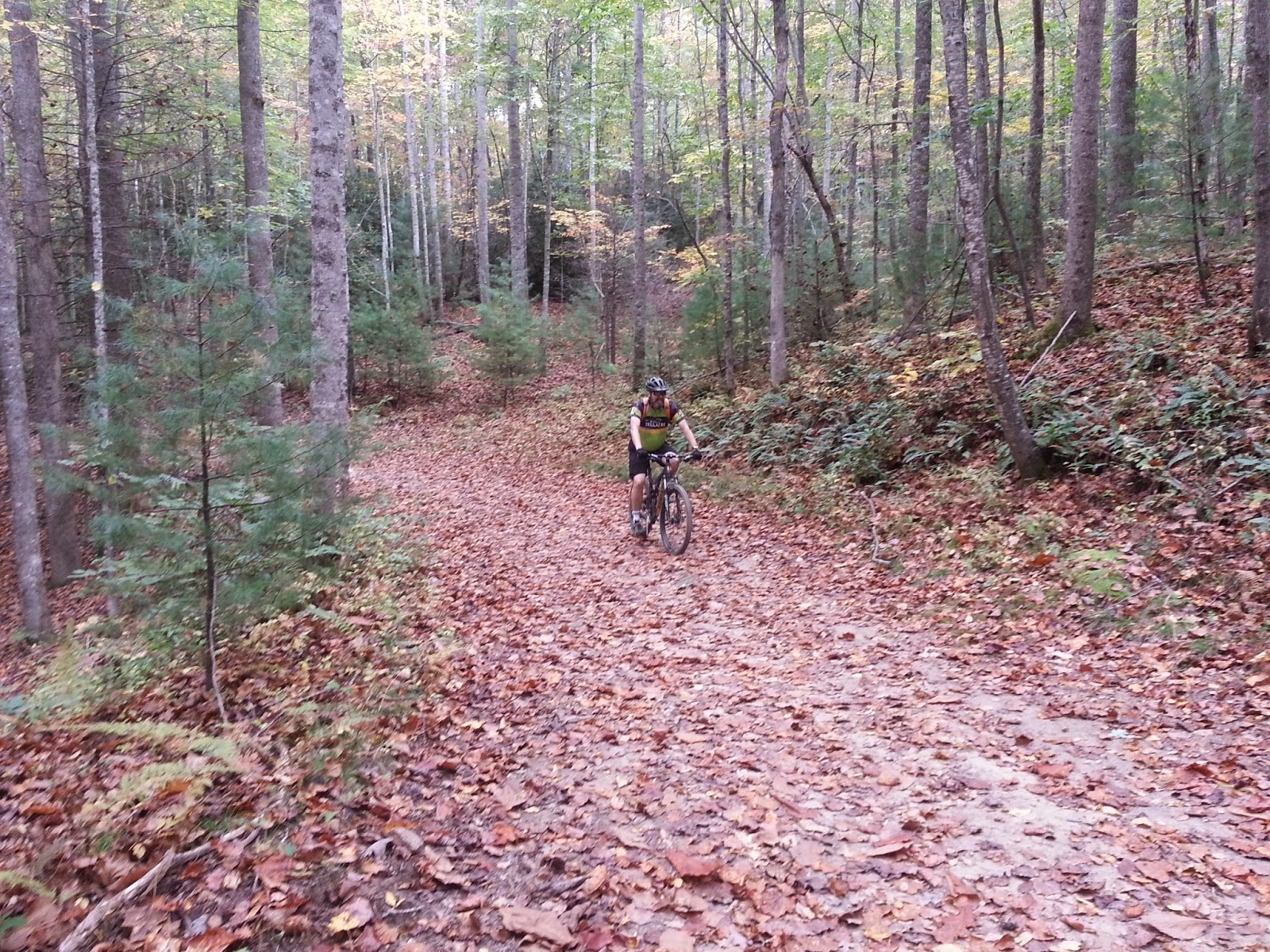 In fact, some of them downright loved it. 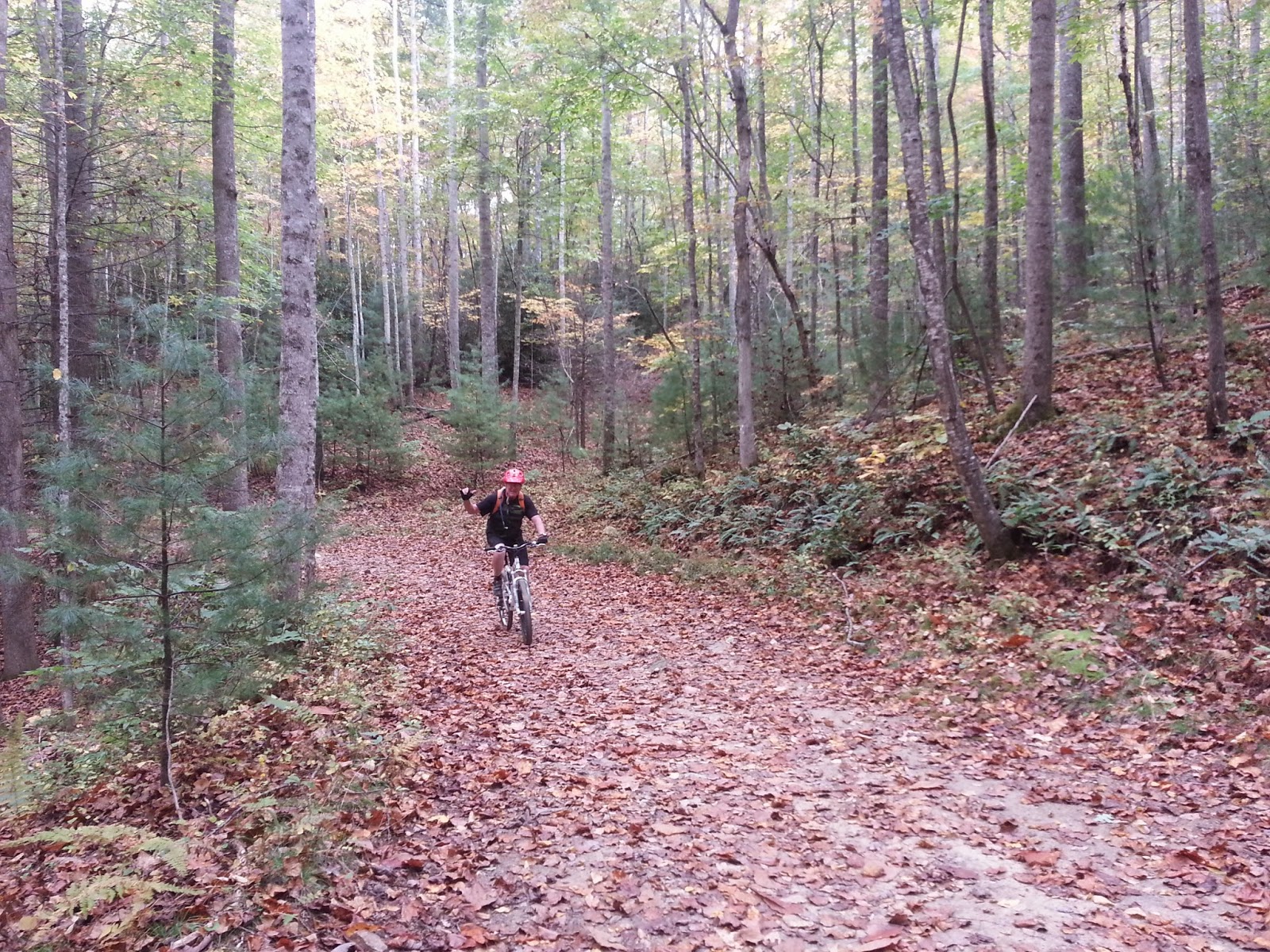 Then there was that time me and George Hincapie took our kids for a ride together. 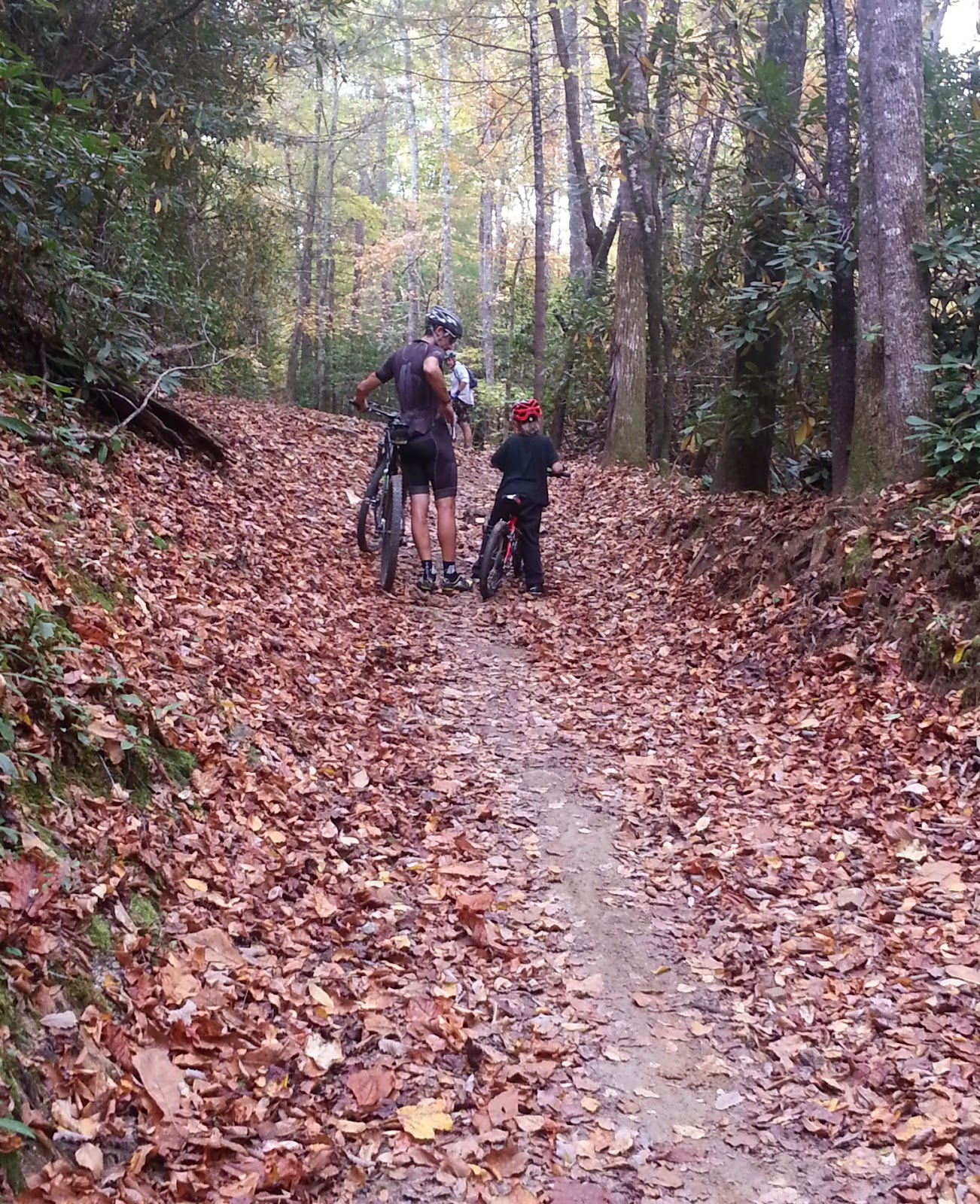 Yeah, that Lunchbox at the top.  He dropped them on that climb and stood there to rub it in.

The route I planned (on the toilet that morning) had us climbing up fire roads and hitting singletrack for (mostly) downhill goodness. 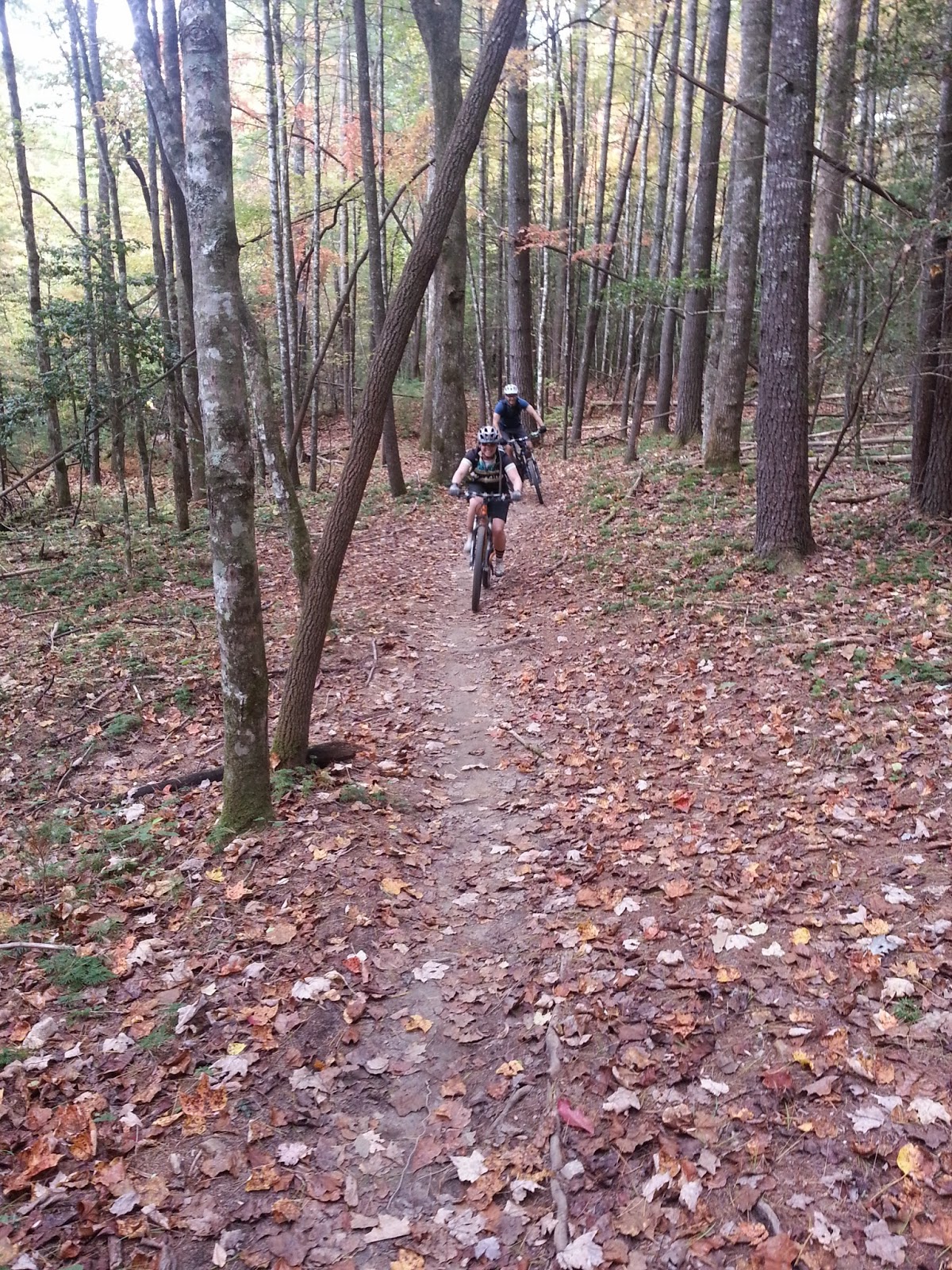 Then there was that time when it took three people to fix a broken chain. 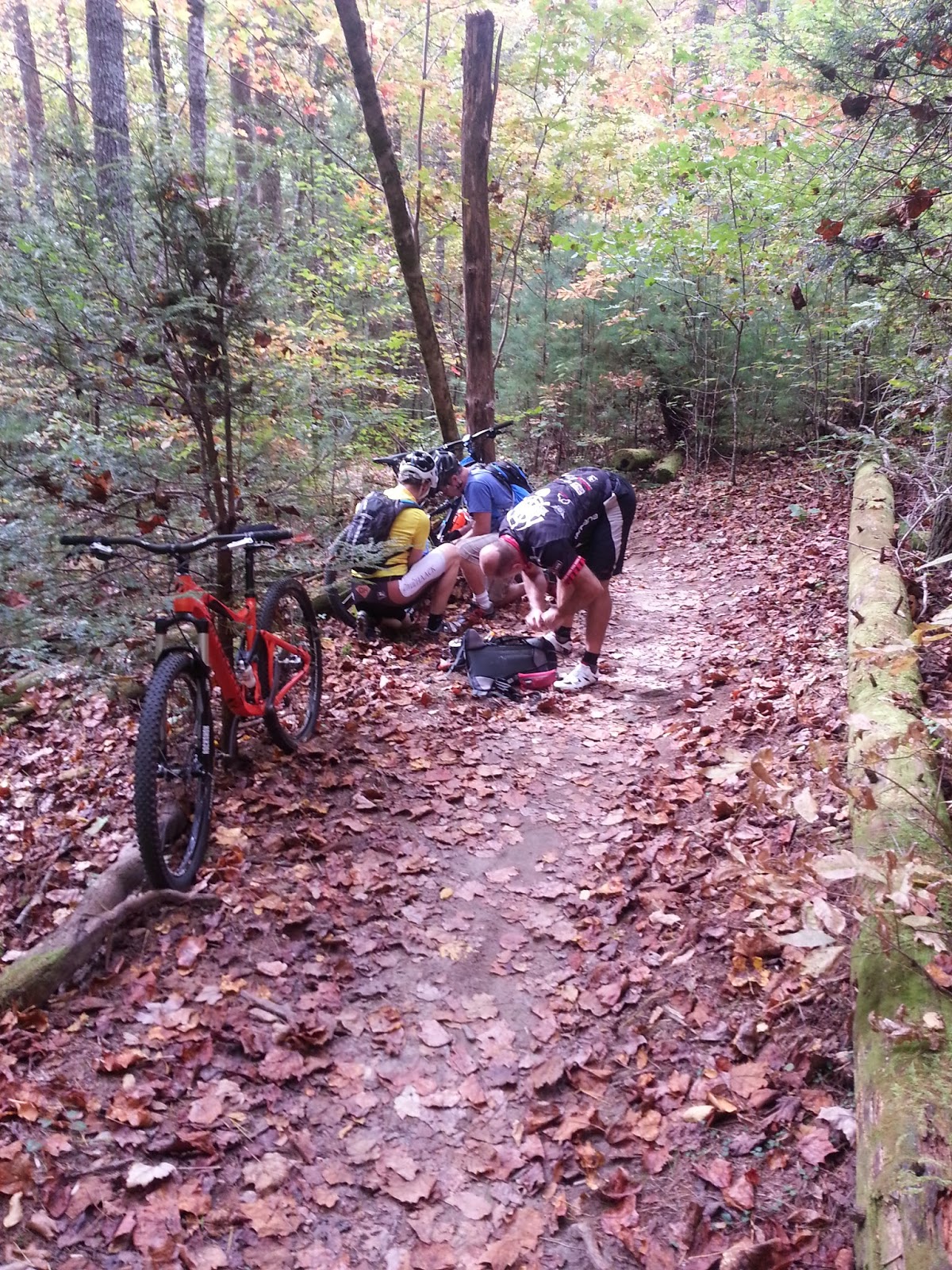 After Craig “My Bike is Fatter Than Your Mom” saved the day with his chain tool, we all sat around and talked about how rad we were. 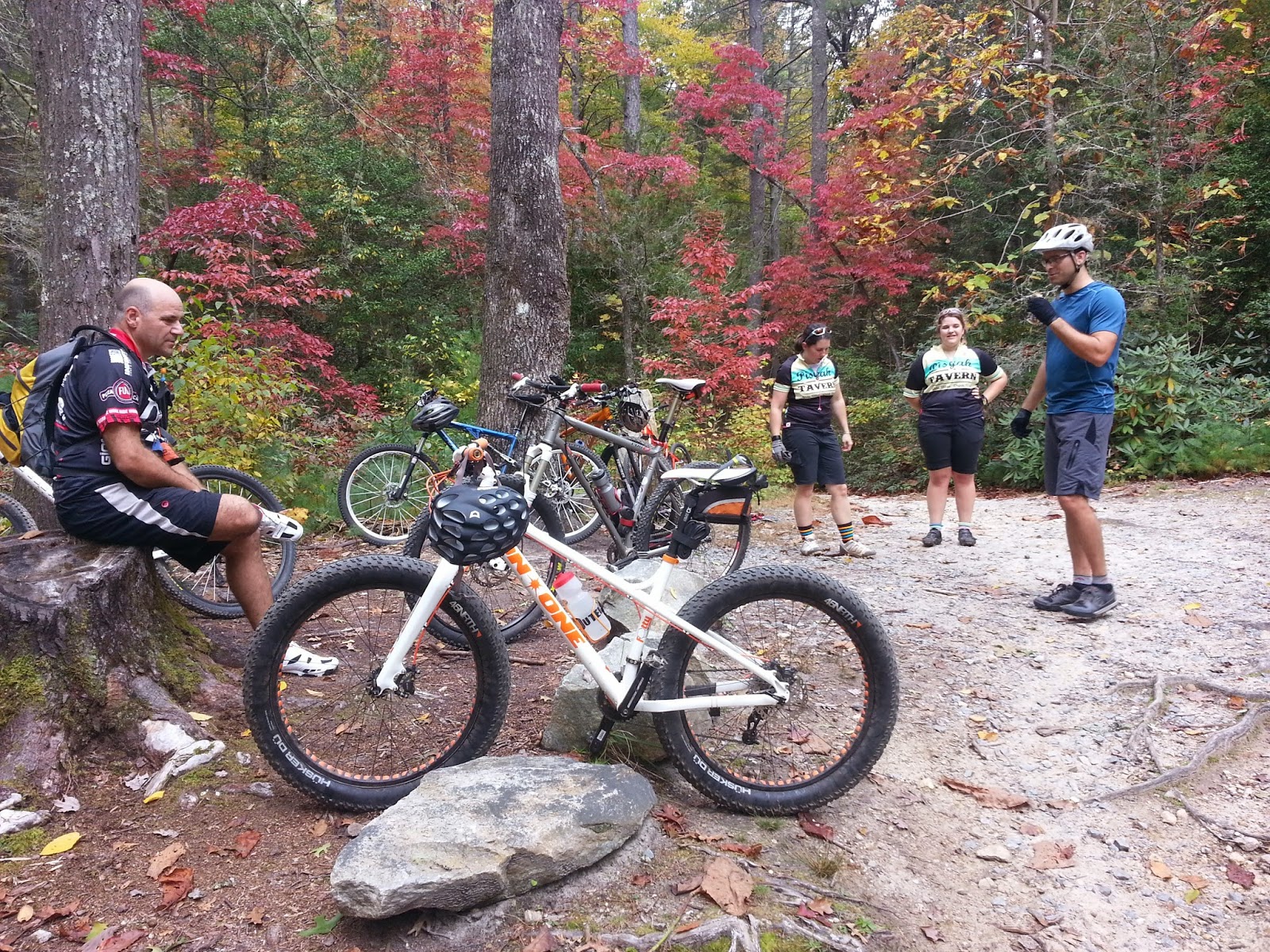 A little more climbing took us to the top of , where we hung out to enjoy the view and the awesome weather. 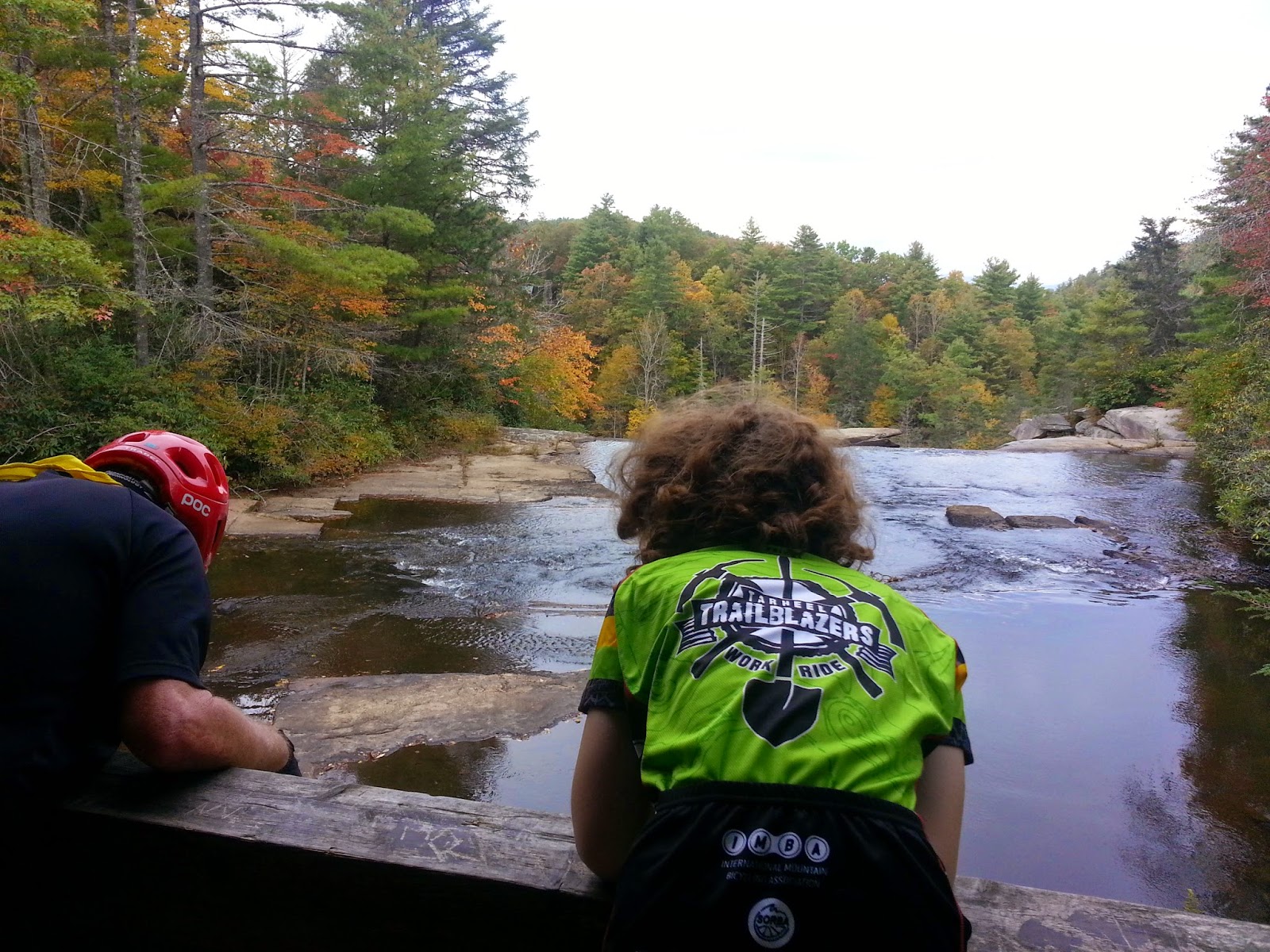 Since we had some “new to DuPont” people in the group, we took off up the road towards the Airstrip Trail, which I promised them was pretty rad.  The climb sorta sucks, but even the Airstrip is kinda cool.  Lunchbox and I celebrated our ascent with a high five. 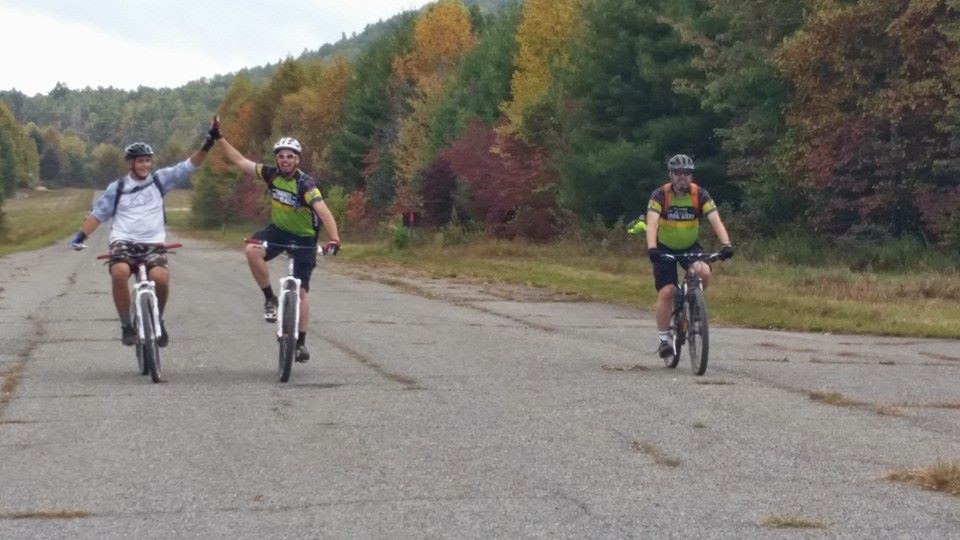 It’s worth the climb just for the view. 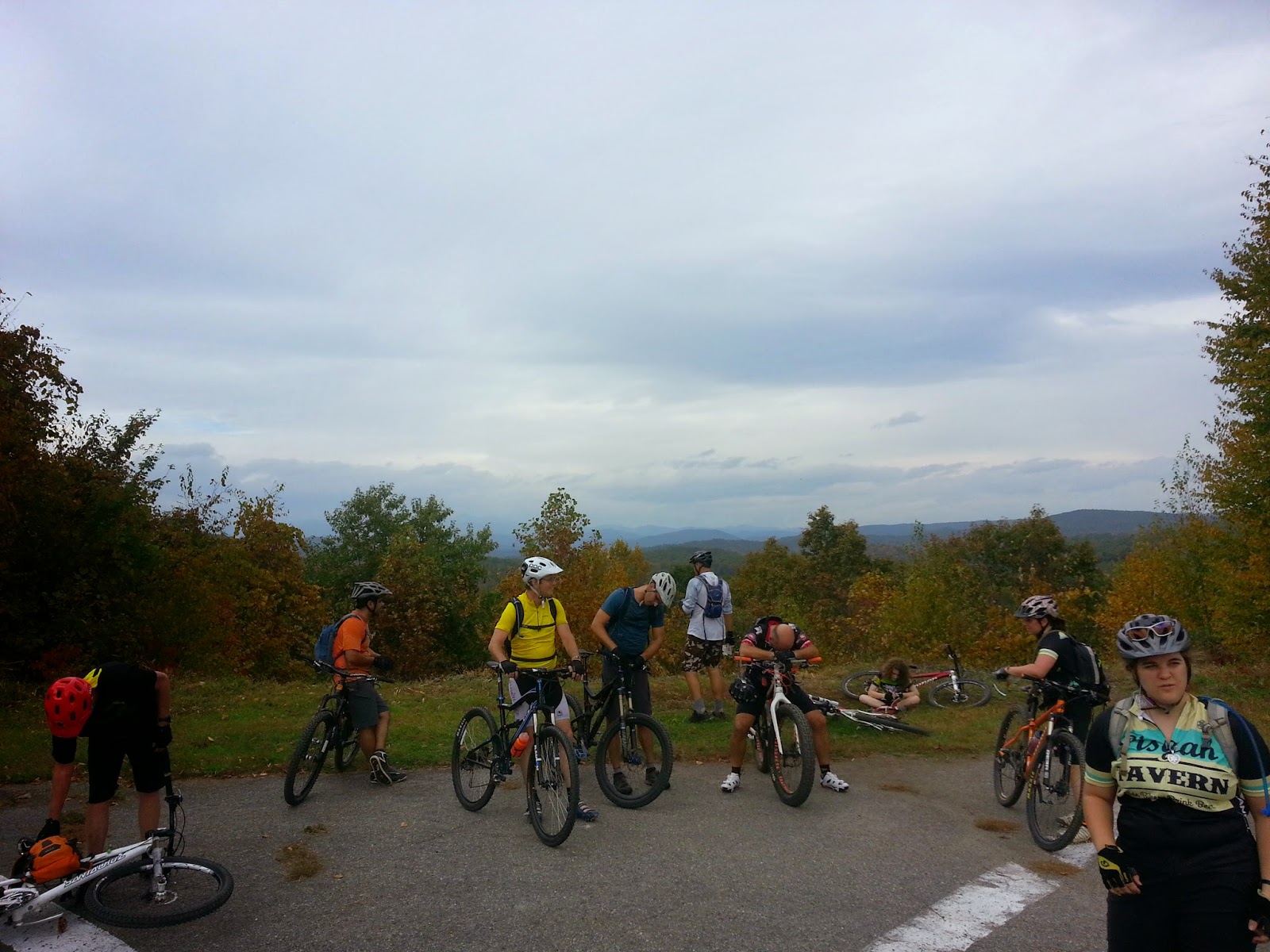 We got everyone back together (kinda like herding cats) and bombed down Airstrip.  It was fun and fast, and there were no opportunities to take photographs.  I had to settle for nature stuff when we finished. 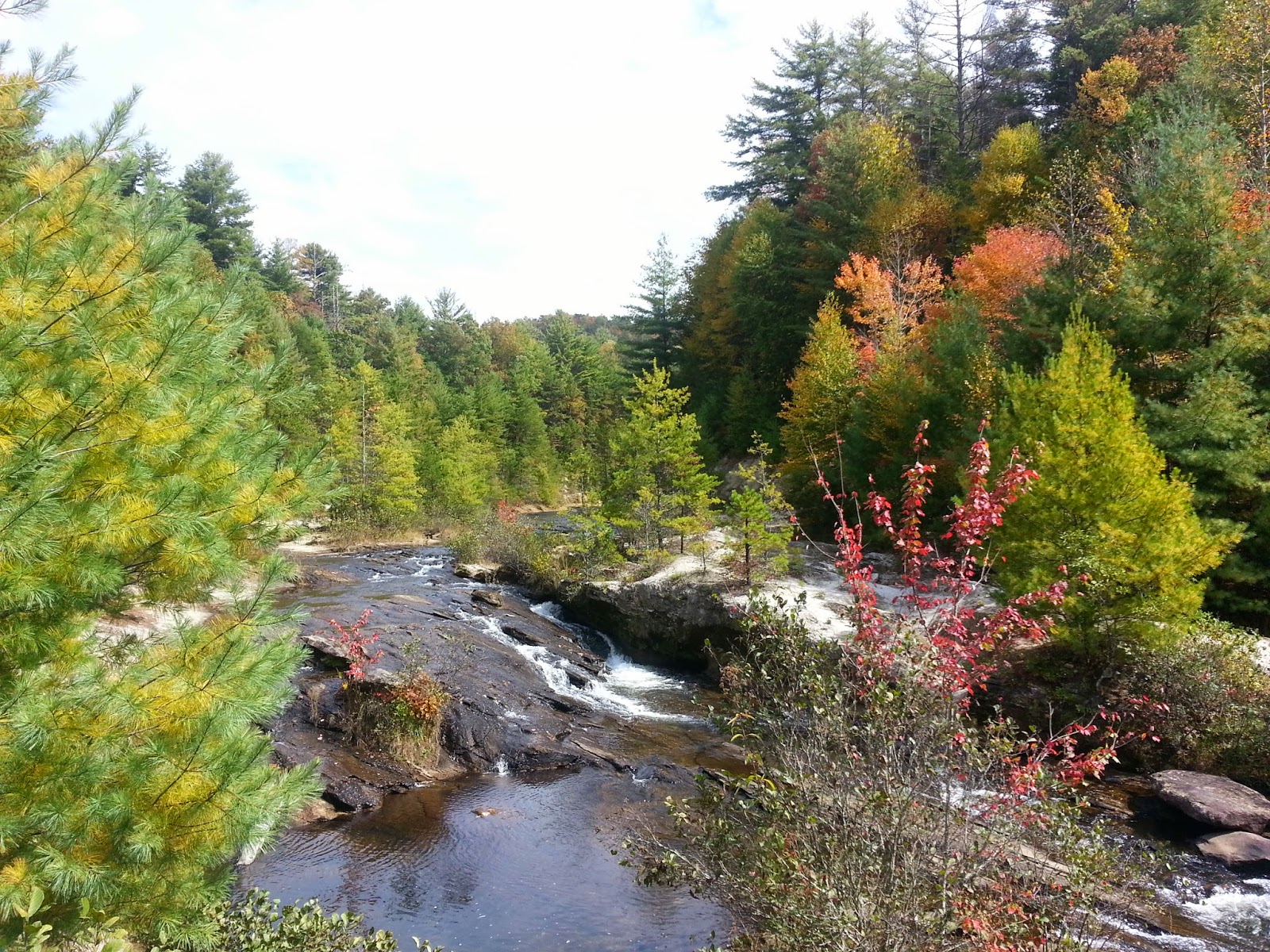 We rode some more and eventually ended up at the skills area we always seem to hit.  Everyone showed that they had skillz. 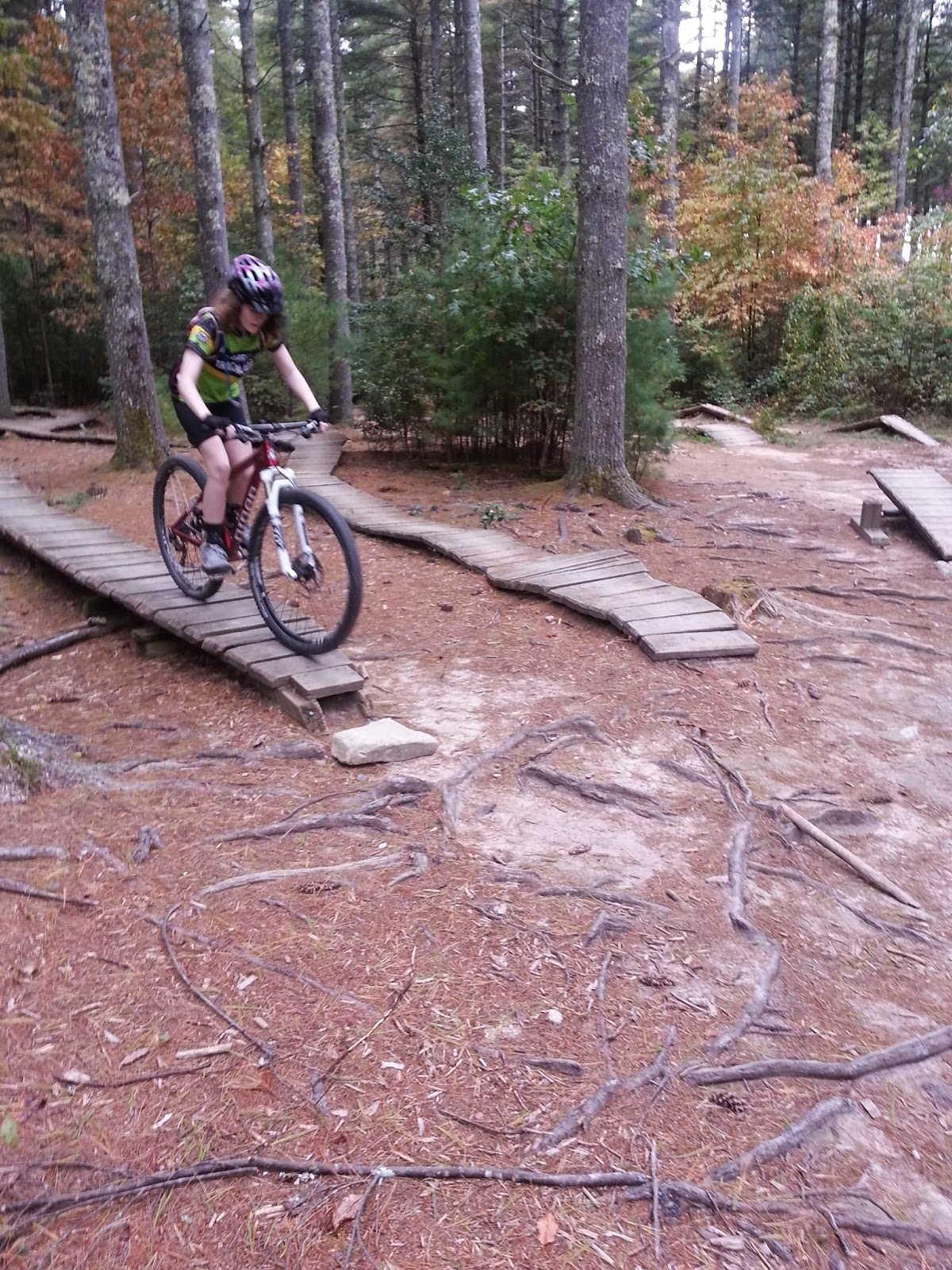 It had been a pretty long day so far, and people were starting to get tired.  Everyone was looking forward to the final descent, Ridgeline, and getting back to camp to relax.  We had just a little more of that fire road stuff to go, so our big group got rolling.  We got close, and Fat Bike Craig said he just got sprinkled by rain.  I looked up in the sky and said, “We should be okay.”

The sky opened up, and we hurried up one more climb to huddle under a shelter.  It was decided that we should just head down Ridgeline before everything got worse.  We knew it would be slick, but much worse if we stayed there and waited for all the rain to fall on it.  One by one, we took off down the river that was once Ridgeline.

I have to admit that it was pretty fun.  My bike handled well in the less than ideal conditions, but about halfway down I started to become concerned for the group I was leading.  I pulled over and waited as people went by, yelling to them that I would sweep the rest of the ride.  I waited in the rain as every person in our group came screaming by, each one with a big smile on their face.  I jumped back in and continued the downhill, until a few minutes later I found my kid on the side of the trail.

With a flat tire.

He flats a lot, and even more on that particular trail.  He was disappoint.  Rather than stand there in the rain and change his tube, I told him to just keep riding.  He actually did quite well, and informed me that he had more traction he did before.  Shredding the gnar on his rim and he didn't shred his rim.  All is well.

It was still raining in the parking lot, so a lot of people just jumped in their vehicles and drove off.  Lunchbox and I waited for the rain to stop, thoroughly cleaned ourselves off, and got ready to relax the rest of the day.

At least my bike got a bath. 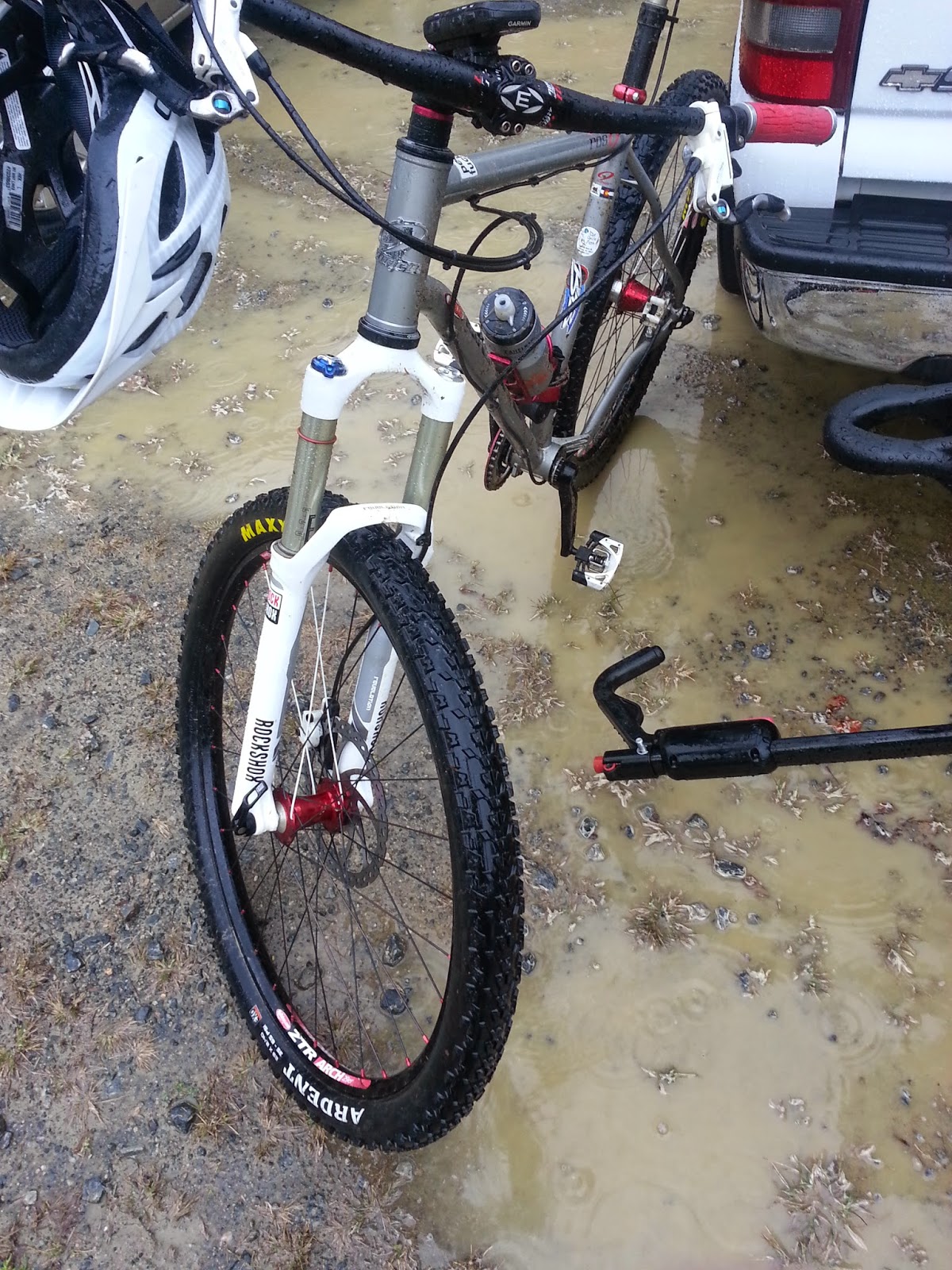 It was an awesome day for sure.  A great ride, and the rain at the end made it really fun.  No one seemed to mind the free shower either, and it was all smiles as we told the stories around the campfire.

You can’t beat a good day in the hills, but we still had some time left up there.

Tomorrow…
Posted by TheMutt at 8:35 AM