It Has Finally Begun (A Race Report I Guess) 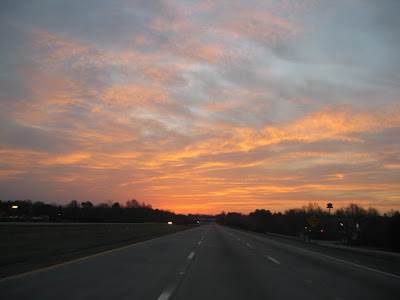 The sun started coming up on the way to Danville, VA, but I was too tired to enjoy it. After “springing forward” an hour for the time change, I was up at the crack of dark to make the long journey to the Shootout On Anglers Ridge. Not only was I tired, but I was kinda nervous. Things calmed down a little when I got to the registration area though.


Lunchbox and I were headed to the trails, but out of nowhere I spotted some vehicles with bikes on them coming out of a parking lot just off the highway. I thought that maybe it had something to do with the race, so I turned around and went back. Turns out it was the packet pickup area, so I’m glad I stopped. Already, I thought that this setup would be better than last year, and even more efficient. However, I had forgotten about an e-mail I received early that morning regarding some kind of database issue. I started thinking that it would be a long day. It didn’t matter though, because this year I got there early enough to warm up and get my shit together.


When we arrived on the scene, I immediately started hearing rumors about the race not starting on time. I headed out for some warm up action anyway, just so I would be prepared. After a few pre-race meetings, I had warmed up several times. At least I would be ready I guess. 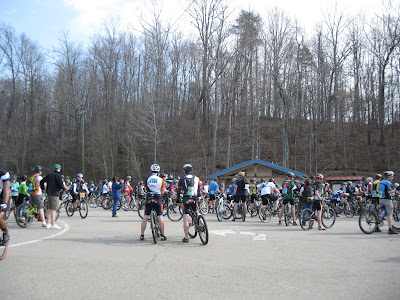 Yeah, I’m in there somewhere.


Eventually we got to race. There were 14 big boys lined up in my class, and I really didn’t think too much about sizing them up. Since this was the first race of the season, I wanted to ride my own pace, and not be influenced by the other guys. I figured that if I plugged along steadily, I could keep my ass outta last place. When the race started though, that strategy changed.


We all sprinted off the line, and I tried to keep up with the leaders. Fellow Internets blogger and Clydesdale Dwayne Hunter was trying to mix it up with the up front crowd, so I graciously let him by (he would’ve gone by me anyway no doubt.) As we took off down the fire road on the way to the trail, I found myself leading the group that split off of the real leaders. Shit, now all of these guys were pacing off me. Lovely.


As we hit the first climb, I mashed my pedals. I had to get my heart rate going, mostly to get to the inevitable red line I love so much. As we hit the first descent, I noticed that the trails was slicker than dog shit (and kinda looked like it too.) My Small Block 8’s were no match for those conditions, so I think I held up the group a bit. After dodging a few trees, I figured out how to maintain control in that soupy mess. The trail conditions improved after that though, and we were back climbing again. I heard one guy a few spots back yelling “On your left!”, so we all let him go by. I guess he was unhappy with the pace I was setting, and wanted to try to catch up with the leaders. It’s a good thing I didn’t try to stay with him though, because a few minutes later I saw him standing on the side of the trail. Before I had a chance to wonder what he was doing, I heard the ever-so-familiar sound of puking, followed by the splash of stomach chunks. I’m glad I didn’t order the same thing as he did for breakfast.


All of this shit happened within the first mile or so of lap one. It seemed like forever, so I was pretty surprised when I looked down so see how far we had gone. Eventually we all settled in, and I was pretty happy with my pace. The lead group was long gone, and there was one guy from my class right behind me (the others were too far back to see.) The guy behind me kept on my wheel, even though I offered to let him by me on several occasions.


The trail was way different than I remembered. That’s probably because they reversed the direction (duh.) The climbs seemed more painful, but I was determined not to fall too far behind. Every once in a while people would pass me from other classes, and we would give each other the usual race chit chat (good job, keep it up, etc.) One guy went by me and said, “Are we gonna read about this on your blog tomorrow?” Hmmm, I’ve never seen that guy before, but I guess that’s what happens when you are famous on the Internets. I replied, “No, I’ll talk about it Monday.” Dumbass me. Tomorrow was Monday, since we were racing on a Sunday. I guess all the oxygen from my brain was being diverted to my lungs. Sorry anonymous racer guy, but at least I mentioned you on here.


The rest of that lap was pretty uneventful I guess. I mashed up the climbs, and went way faster than I normally would on the downhill stuff. It was kinda crazy how fast I went sometimes, but I felt like I had plenty of control. I was hoping to catch a glimpse of the lead group, but I never did. Towards the end of lap one though, I did catch up to my pal David from the Skeleton Crew, who went by me back in the beginning. Just as I thought my steady pace was working, he informed me that he had been riding on a flat tire. Shit.


So much for thinking I actually caught someone. I whizzed through the last downhill section and passed the start/finish line. I was pushing faster, hoping to put a big gap between David and I while he stopped to air up his tire.


Speaking of stopping, that’s just what I’ll do here. Sure, I’m stretching out a two hour race over two days, but that’s how I do things around here sometimes. Besides, I have another issue to address before I go bye-bye today. 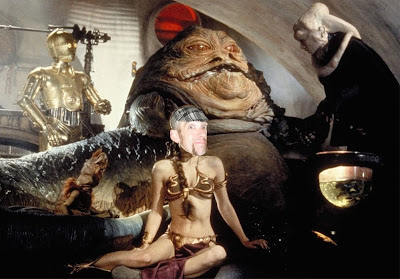 “Does this bikini make me look fat?”

Yuck. At least he used Return of the Jedi and didn’t ruin my favorite Star Wars movie (ESB) with his vain attempt to win a contest. I’ll still vote for him, and you should too. See y’all tomorrow with the rest of my race recap.
Posted by TheMutt at 8:09 AM