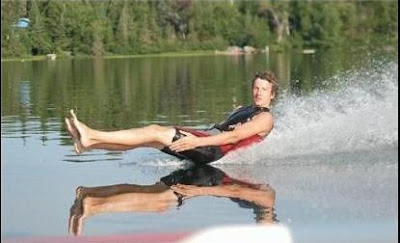 This is part two of the race report I started yesterday. Get ready, ‘cause I’m picking up right where I left off. I was all alone for the first part of the next lap (just how I like it), but I started feeling shitty. My left quad was cramping, and I could feel it every time I stood up to climb. That is not what I needed, but there was nothing I could do about it. I decided from that point on I would just dismount and walk my bike up the bigger climbs (there were only a few), saving my legs for the rest of the trail. I knew I would be losing precious time that way, but at least I would be able to finish.


I was drinking plenty of fluids and I had food in my belly, but the leg cramp was getting worse. In fact, my right leg started cramping a little too. Shit. Who the hell cramps on an 18 mile cross country race? Me, that’s who. That’s what the first race of the season does to me I suppose. I didn’t take long for David to catch back up to me, but he was having his own issues. He told me his tire had lost some air again, and his back was hurting. Great, two guys whose bodies were falling apart during an XC race were battling it out for position. It did make the rest of that lap better, having someone to suffer along with me. I tried not to let him out of my sight though, but my cramps were getting much worse. Every time I looked up to see where he was, I saw him stretching his back out, trying to get through to the end. Eventually, he pulled away for good, with only about a mile or so left.


I started punching my quads, hoping that I could get at least one more burst of power from my crampy legs. It worked, and I gunned it through the last section of singletrack. When I crossed the finish line, David was nowhere to be found. Too little, too late. 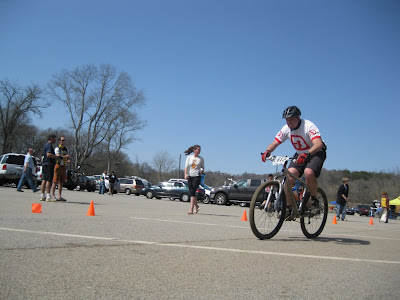 You can clearly see the pain on my face in the photo above, unless of course you were looking at that girl walking by. I totally understand if you were. Pervert.

Lunchbox came running over to see how I was doing, but I told him I had to keep spinning for a while. My legs were toast, and I had to keep them loose. Eventually I felt better, so I finally got to get off of my bike. I went over the check the standings, and it wasn’t as bad as I thought. Tenth place. Not anywhere near the podium, but at least I wasn’t DFL. And a top ten finish is a top ten finish, no matter how you look at it. The most important thing is, I had a shitload of fun. The course was tough (muddy at times), people were puking all over the place, and there was all kinds of other extra shit that you won’t find in any other sport.


I have a long way to go for the rest of the season, but at least I got my ass out there and did it. Now I have to keep this “training” stuff going, and maybe I can get a little better as the season goes on. I’ll probably just drink more beer though. Or better yet, enjoy some free wireless Internets and eat some big ass nachos (cheap ones too.) 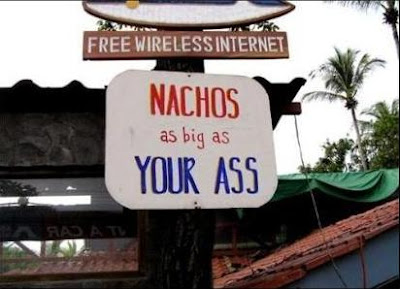