What It Was, Was A Race 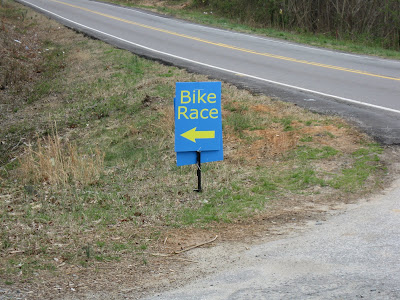 Yesterday, me, The Dirty Party Cycle, and Lunchbox traveled to the city of Winston-Salem, NC for another bike race in the Southern Classic Series. It was race number two in the series, at Hobby Park. I’ve never had the pleasure of riding there until yesterday, but I wasn’t really all that worried about it. Everyone I know that’s ridden there told me that it was much easier than last week’s race. Since I believe everything I hear, I decided not to preride the course. 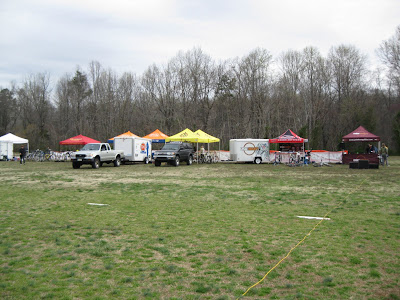 It only took an hour or so to gt there from my house, so we arrived with plenty of time for packet pickup, chit chatting with my mountain biking friends, and other general nonsense. I didn’t have that usual nervous feeling I get before a race, so I started to wonder what the hell was wrong with me. My legs even felt pretty good when I was spinning around the parking area.


There was only one problem though. I was tired as hell. Little Miss Sunshine was on call for work all weekend, and it seemed to affect me as well. Hearing the phone go off in the middle of the night so she could go save someone from a heart attack had me suffering from a severe lack of sleep, so I wondered if I could even stay awake during the race. It wasn’t her fault, and what she was doing was definitely more important that me being well-rested for a bike race. Nevertheless I knew I would be in for a sufferfest.


When 10:30 rolled around, we all lined up. When we were given the signal, we all took off. Since I wasn’t familiar with the course at all, I was hoping to fight of the urge to get into the woods first. It would be a little bit of a challenge to get in the woods though, since we had to ride up this big ass hill on the way to the trailhead. I couldn’t help but pedal my ass off, and I started up the hill in third place. 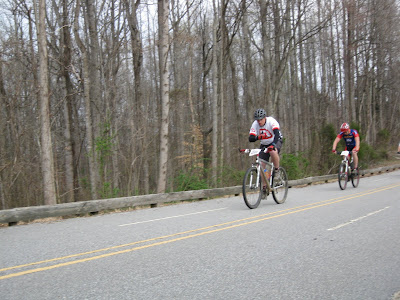 It would quickly bite me in the ass though. As soon as Lunchbox took that photo, the molehill became a mountain. That shit went straight up, and I nearly came to a complete stop. A few guys went by me, but I pressed on and tried my best to stay ahead of the rest of them. It wouldn’t be easy though. 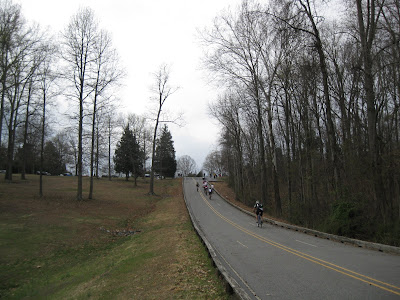 I think I entered the singletrack in around 5th place or so. My legs were burning, and my lungs were feeling shitty. Sure, I warmed up, but I wasn’t ready for this. The trail was in prime shape though, so I pushed as hard as I could to get through the twisty trail. It was fun, but I was in so much pain that I couldn’t enjoy it like I really wanted to. The rest of the pack was right on my ass, and eventually one of them went by, followed quickly by another.


We continued on the first section, and it was full of short, bursty climbs, and swoopy downhills. A combination of being too tired and not being familiar with this particular trail started to affect my riding. I was making big mistakes, and it was costing me and kind of momentum I could have been gaining. I kept thinking I was gonna fall off the side of the trail, which made things even worse.


Eventually I let two more guys go by. They didn’t get far ahead, but I was;t recovering very well from my effort either. Since there were so many switchbacks, I could see most the riders that were ahead of me on that first lap. I thought I could catch them, but I had to settle down and get some of my lung power back. It seemed like I would suffer the whole time though.


With only a couple of miles to go on that first lap, the guy who had been riding my wheel for quite some time finally got by me. Well, actually I let him by (sort of.) I told him I couldn’t pull him around anymore, and that really sucked. Any motivation I had to catch the leaders was gone at this point, and I even wondered if I could finish the race. I’ve been riding enough, the course wasn’t that difficult, and the leaders weren’t out of my reach, but I just didn’t feel like I could do it. I decided that I would somehow finish, because I don’t quit during races. That would hurt way more than if I finished last.


After winding through the last section, I rode the long downhill to the start/finish line. I got passed by one guy from another class (who was finishing because he started a half hour earlier.) As I was rolling through to the next lap, he turned right in front of me. I shouted out to him, swerved to avoid a crash, and he mumbled something back to me. I couldn’t hear if he was being a smart ass or not, but he should have been paying attention. I guess he though that he was the only person out there that day.


Yes, I’m cutting it off here. Not so much because I want to spread this out over a few days, but more because I went on a little too long today. I know y’all have a short attention span, and since I didn’t use a lot of photos today, that makes it more difficult for you to follow along. I’ll be back tomorrow to finish up this hellish race adventure. In the meantime, go check out Dicky’s new bike.
Posted by TheMutt at 8:43 AM