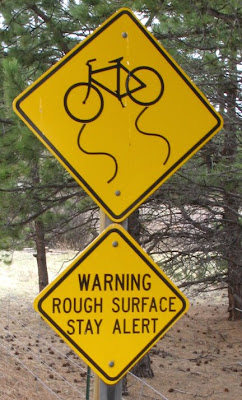 Yeah, race day is in two days. Sunday, I’m heading up to Danville, Virginia for the start of the the Southern Classic Series. It’s race one, better known as the Shootout On Anglers Ridge. I’ll be heading out from Charlotte at around 6:45 a.m. to make the two hour drive up there.


Am I ready? I guess so. 18+ miles on tough singletrack should be good enough to test out my beginning of season fitness, and I’m ready to find out. I’m a little nervous, but I get that way before any race. Last year, I took off with the group and didn’t like the slow pace, so I stepped it up and tried to build a big gap up front. It didn’t work. I was hurting before the end of the first lap, and I was an easy target for the other guys. 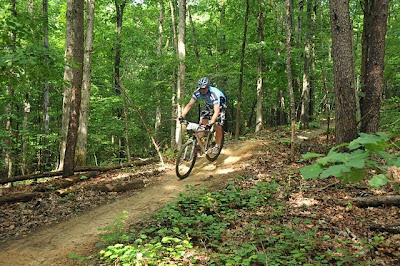 I spent the next lap trying to catch up, but I didn’t have it in me. This year, I’ll try to keep pace with the group, and if I feel good I’ll attack. I don’t have any illusions of grandeur here as far as trying to get on the podium, but I’m hoping like hell not to be DFL. That is my only goal for the first big race of the season (and while I’m at it the rest of the season too.) Maybe last year’s woes were due to the fact that I didn’t get in a good warm up, because I had to listen to Tyler Durden shout out instructions through his megaphone. 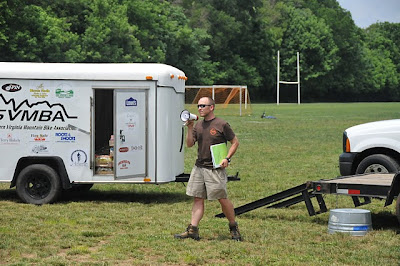 I am Jack’s raging megaphone.


This year I’ll make sure to warm up properly, no matter what the megaphone says. Will it help? Who knows. At least I won’t have that excuse this time.

Yesterday, I picked up a new accessory for Lunchbox: 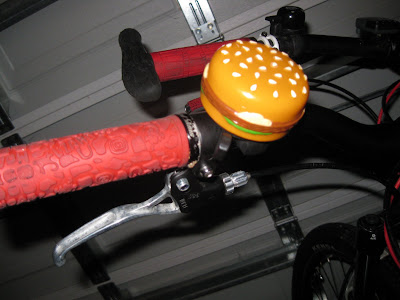 He wanted a bell for his 29er, so this is what he got. With a name like Lunchbox, a hamburger seems appropriate for him, don’t ya think? I’d like to give a shout out to the fine folks at First Flight Bicycles for this tasty new gadget. Head on up there and check them out, along with the Mountain Bike Museum of Art and Technology (located in the same building.) If you haven’t been there yet, then get to it. There’s a lot of cool stuff to see there.


In other news, I hired a new assistant. 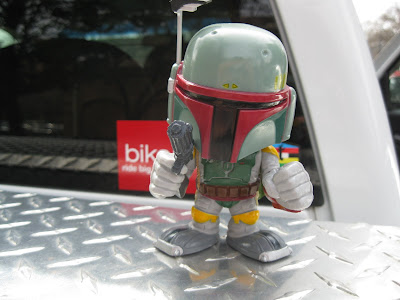 "Put The Mutt’s bike in the cargo hold."

In case you don’t know anything about Star Wars (wtf is wrong with you?), this is Boba Fett. He seemed like a good addition to the crew here at B-43, mostly because he is a bad ass. My little R2 mechanical unit has been slacking lately, so I needed someone to jerk a knot in his tail. Also, I’ve been slacking a little myself, so maybe he can help me with writing this blog and maybe even with my “training.” Don’t blame me if shit gets all bounty hunter-y around here. You’ve been warned.


See y’all Monday with a full race report, if I survive.
Posted by TheMutt at 8:13 AM