Today is Wednesday, and I’m talking about Sunday. I blog like I race…way behind. Anyway, since it was Mother’s Day, I did what any good son would do and headed out to ride my bike and pay homage to Mother Nature. Don’t worry though; I went to see my Mom later in the day. Anyway, it was time for a trip to the U.S. National Whitewater Center for some early morning hot laps…all by myself. 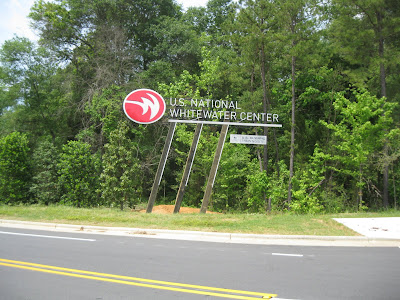 No plans in particular, except to ride as many laps as I could. That wouldn’t be many, because I had places to go and people to see. Since Lunchbox is fourteen and sleeps all day, he didn’t join me. Little Miss Sunshine was out on her own bicycling adventure. She’s training for something, but I’ll get into that later. Anyway, I got there and the place was pretty empty…just how I like it. I grabbed my dusty bike and got ready. 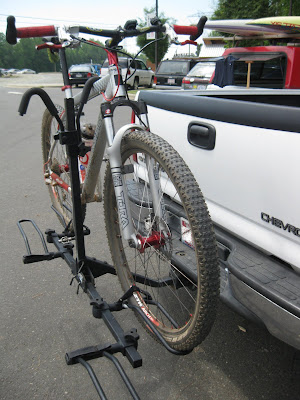 After a short spin in the parking lot to get my legs going, I headed to the trail entrance. I started down by the river, which is the spot where the race starts for the Catawba Riverfront Classic. Since I ride there a lot, I didn’t really need to practice. It is one of the toughest trails around here though, and I definitely needed that. I hit the trail full speed, and I was all alone.


I kept running into spider webs, so I knew I was one of the first people out there that day. I felt great, kinda like I could take over the world. I hammered around that trail, and enjoyed every second of it. I was going at a “race pace”, and it was hard to keep it up sometimes without people pushing me along. When I finally finished the nine and a half mile loop, I felt sick. I stopped for a minute at the trail entrance, and did my best not to throw up. Even though I nearly puked on my shoes, I guess that meant that I had worked really hard on that first lap. It’s been a long time since I pushed myself to the point of vomiting.


After I got myself together, it was time for another lap. People were all around now though, and I saw lots of hikers on the trail. They were all walking the trail in the wrong direction too, so I knew this time around would be a challenge. I kept a watchful eye on my surroundings, and I made sure to ring my bell every time I saw people on the trail ahead of me. I passed a few people on bikes out there too, so I guess that means that I was the only one out there doing hot laps.


Aside from the fact that there were people clogging up the trail, lap two was pretty awesome. I only stopped once to adjust my slipping seatpost, and while I did I snapped a photo of the lonely trail. 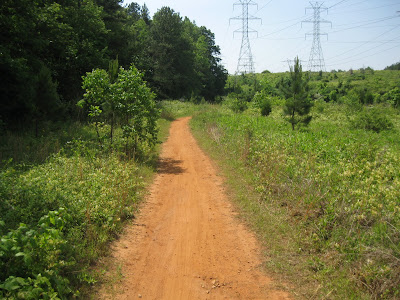 It was a great day. I finished my lap and headed home. It was time to grab the kid and head up to my Mom’s house to celebrate Mother’s Day with her. I was good and worn out from my morning ride, and I guess that’s a good thing. Maybe this training stuff is a good idea after all.
Posted by TheMutt at 8:26 AM