It Was Supposed To Be Easy

Sunday’s Race To The River down in Columbia, South Carolina was nothing like I thought it would be. Everyone told me that it was a pretty flat course, so I planned on hauling ass without getting even the slightest bit tired. Before I get into the race report though, I’ll talk about the actual event.


When I went to the website to sign up, there was no Clydesdale (or singlespeed) class listed. I heard that I could just sign up in another class, and that they would change it for me when I got there. The problem was, I had no idea what time I would be racing. There were two waves, one beginning at 10:00 a.m. and one at 11:00. I figured that I would just show up in time for the first one, and see what happened. It would make for a long day.


The Dirty Party Cycle showed up at my house at 6:30 a.m. Sunday morning, so we could make the little over an hour and a half drive down to Harbison State Forest. I figured that would get me there with plenty of time to register, get my shit together, and warm up. When we got there I found out that I would leave with the 11:00 group, so I had a lot of time to kill. After shooting the shit with all the people I knew down there, I got ready to warm up at around 10:00. Lunchbox and the DPC hit the trail for a fun lap, and I let my kid use one of my Clean Bottles since he forgot his. That would leave me with only one bottle for the race, but with the course only being 17 miles I figured that would be all I needed.


After a quick check of the map, I headed out on the trail for my warm up. The plan was to ride for about two miles, and then spend the rest of the time leading up to the race spinning on the gravel road. I guess I didn’t pay attention to the map very well, because two miles turned into eight. I kept waiting to see the parking lot during my warm up, but it looked like I was getting deeper and deeper into the woods. A time check revealed that I had fifteen minutes until race time, so I hauled ass to find my way out of there. I got back to the parking lot with just enough time to refill my Clean Bottle and head to the start line.


The groups went out in waves, with the Clydes going last. When the siren went off, I got up to a decent speed. The other guys weren’t pushing very hard, so I decided to take it up a notch. One guys tried to fight me off, by I eventually passed him by. I looked back, and I had jumped way out ahead of the group. Suddenly, the gravel road turned steep, and I had to downshift. My bike was having some problems changing gears, and a couple of people went by. After the climb I stepped it up again, getting into third place as we hit the trail.


My legs were burning already, but I figured that was probably because of the extra warm up I did. I knew that I would recover quickly, since the trail was relatively flat at the beginning. I tried to shift to a higher gear, and again my bike didn’t want to cooperate. Two more guys went by. I settled in to recover a bit, and one more went around me. I was in sixth place, and hurting already.


About two miles in, I saw a guy in my class on the side of the trail with his wheel off. I said, “That sucks” as I passed by, but I knew it would help me. I bet he would have been able to change his flat faster if he had an Awesome Strap on his bike. I was back in fifth place, and I put the hammer down to put a gap between me and flat tire guy. It wouldn’t last long though, because after about a mile my chain popped off. I pulled over to get it back on, but it was difficult with the Third Eye Chain Watcher in the way. Eventually I got in back on, and tried my best to haul ass again.

Flat tire guy caught me again shortly thereafter, and I tried my best to stay on his wheel when he passed me. It was hot as shit at this point, and I was wondering if I would have enough to drink for the whole race with only one water bottle. I tried to ration it, watching the mileage on my bike computer to make sure I didn’t run out before I rode seventeen miles. Flat tire guy was long gone, but I still kept a good pace.

The course wouldn’t stay flat for long either. There were a few short, bursty climbs, and I made short work of them. I didn’t realize it though, but they were slowly wearing me out. Eventually I entered what they called a “technical” section, which was basically a rock garden on a switchback climb. It looked pretty easy, so I pedaled my way through it. At the top though, I saw flat tire guy walking his bike. When I came around one of the switchbacks, I got a better look at his bike. He had flatted again, and he had his front tire wrapped around his shoulder. He disappeared right after that, so I figured he must have cut the trail to get out of there and settle for a DNF. A few minutes later though, I saw another guy pushing his bike up a climb. I asked how he was doing, and he said, “Bad.” He told me that some guy just passed him riding on just his front rim. Shit, flat tire guy was still on the move. I figured it wouldn’t take long to catch him though, since I had traction (you know, from having actual tires on my wheel instead of a bare rim.) It took a few miles before I finally saw him though.


He was hauling ass, and you could hear his rim bashing the rocks and roots on the trail. It was all I could do to get around him, and even then he stayed with me for a while. Eventually I lost him on a fast downhill section, but I had to push it pretty hard. My legs were already locking up at this point, so I figured that it would only be a matter of time before he caught me again, even without a front tire. At least I was back in fifth place.

I finally saw a familiar part of the trail, which was the one that led back to the parking lot. I also saw Lunchbox hiding in the woods to photograph me. 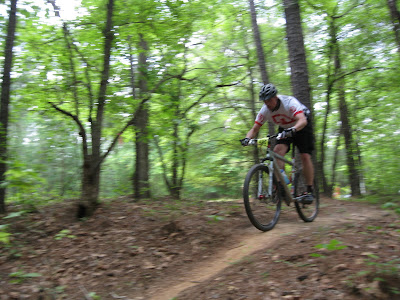 I told him I had another lap to go, and also let him know that there was a guy riding on his rim. He got a picture of that when the guy finally came by. 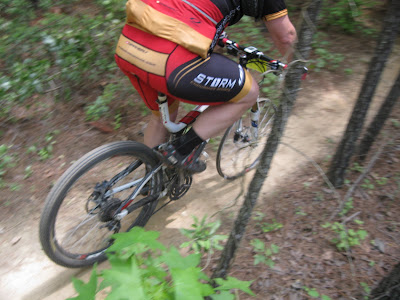 Yeah, I wouldn’t have done that shit. I like my wheels too much, and there’s no way I would ride on it without a tire. I would have taken the DNF, because I wouldn’t want to explain to George why I need a new wheel. Anyway, Lunchbox retreated from his spot in the woods, and got a clearer photo. 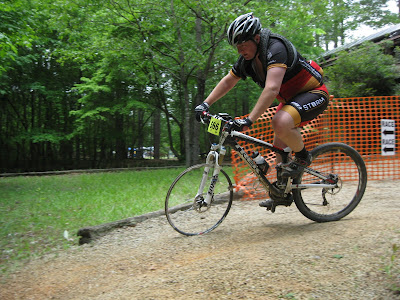 As I made the approach to the start/finish line, I saw the DPC on the side of the trail talking to some dude. He said, “Here”, and handed me a full Clean Bottle. He saved my ass with that, because I wouldn’t have made it another mile without liquid refreshment. Thanks dude!

Wow, this post is really wordy. I’ll cut it off here, and finish up tomorrow. Lap two would be a little shorter, but not any easier. See y’all tomorrow.
Posted by TheMutt at 8:11 AM

He must be loaded or something, because wheels aren't cheap. That's just plain stupid...or crazy...or both.

Just found this post. When you saw me on Saturday, you should have told me you have a blog-very entertaining! I had another rim at the house that I could relace back on for free (used to be a head mechanic/manager at a shop). But, yes, I am that hardcore.