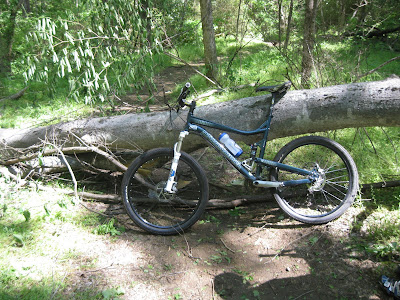 After months of neglect, I finally busted out my smalled-wheeled bike, Goose. You know, my Diamondback Sortie. There is a review of one in the latest issue of Dirt Rag, by the way. Anyway, it’s been a long time since I even entertained the thought of riding it, but Little Miss Sunshine suggested that I take it out once in a while to give it some love. The truth is, I’ve been a little hesitant to ride it. No, not because I’m on the Bike29 team. I’m sure George wouldn’t mind me riding little wheels every once in a while. Actually, the real reason is because I broke a rib the last time I rode it. I put it away that day and it has been sitting ever since. Well, except for the time that Lunchbox borrowed it for a ride.


Anyway, the DPC and I rode over at Poplar Tent, our local mountain biking playground. That place is always fun, but it’s been quite some time since I’ve ridden there on small wheels. We started out at a pretty mellow pace, since I was getting used to being lower to the ground again. I had trouble climbing, and the downhill stuff was just plain scary. Those 26” wheels felt all squirrely, and I seemed like I would loose control at any given moment. I did not like that feeling, but I had no choice since we were already into the ride.


Since the DPC was on his 29er, I had a hard time keeping up at first. Eventually though, I got used to the small bike and kept up with him on the downhill stuff. However, every little drop off and jump felt ten times taller than it actually was. I didn’t think that big wheels made that much of a difference, but I guess they do. Maybe it has something to do with the fact that I’m no longer used to such a small bike. One thing was awesome though. The suspension. Five inches of front and rear travel made for a really comfortable ride. I felt like I was sitting on a couch the whole time. Now, if I could just get than handling thing down, I would be good to go.


About six miles in, I was getting a little more comfortable. I started hitting the jumps at full speed, and trying to get as much air as I could. It was fun, especially since I started taking bigger risks. I still felt like the bike would squirt out from beneath me any any time, but I enjoyed that danger. Hell, I even hit the teeter totter for old times sake. 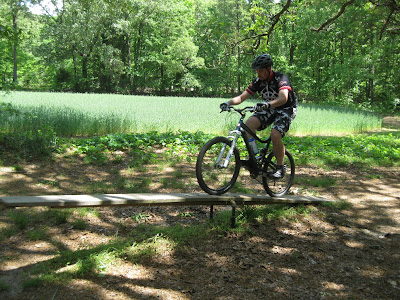 Holy shit. I just noticed how little that bike looks underneath me. I don't feel like some kind of giant dude, but the bike makes me look like a damned Sasquatch on it. The frame is an XL (21 inches), but those tiny wheels make give the appearance of me riding a kid’s bike. That probably had a lot to do with the lack of handling I was experiencing. I did enjoy the ride, although I probably won’t be riding that squishy bike a whole lot in the future. I’ll still break it out from time to time to have a little fun, but my 29er is definitely the right bike for me. It’s nice to have several bikes to choose from when I ride though, for sure. Maybe I should start looking into a full squish 29er, and sell off my trusty Goose. Nah, I’ll hang onto it. That little bike and I have been through a lot together. 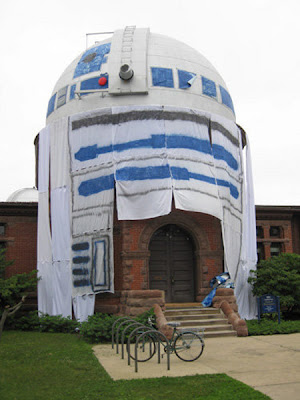