Dazed, Confused, And Moving On 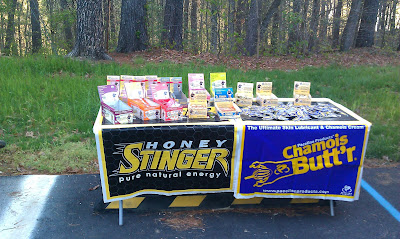 Before I forget, thanks to all the race sponsors for the 6 Hours of Warrior Creek like Backcountry Research and Honey Stinger, who also support me for some reason.


My head was still not right, which probably explains why I kept going out there. There was no chance of me getting on the podium, but I don’t quit races. Besides, I’m not yet good enough at endurance races to compete with the big boys, so it’s only about me out there. I push myself to see what I can accomplish, and I’m still usually amazed at what I can do.


I hit the trail, and I was still a little bit dizzy and had a huge headache from my “accident.” My legs felt fine though, and I was somehow able to keep my heart rate down. Well, until I hit the first real climb, that is.


My stand up and mash legs were gone, so I had to remain seated throughout the climbing portions of the ride. That kind of sucked. Even though I “raced” my geared bike, I still ride it like it’s a single speed. I like to run a higher gear, mash, and get through the climbs as quick as I can. That sitting and spinning shit is for roadies. I hate it.


Mentally, I was worn out. I wasn’t too far behind physically, either. I could still ride the flats and downhills with plenty of speed, but it didn’t take too long before I ended up walking most of the longer climbs. That was still better than last year though, since I started walking on my second lap. I couldn’t wait for it to be over, and I kept checking the mileage and my watch to see how long I had left. That just made things worse.


I got passed a lot more on this lap, and did no passing of my own. A friend of mine from the Total Cyclist team, Chris W., came by and tried to get me to push it, but my legs couldn’t do it. I literally couldn’t pedal uphill at all. I had plenty of food and liquids in me, but for some reason my body didn’t want me to ride anymore.


One fast rider called out his pass, and I told him he could have the left side as soon as it opens up. He was a little impatient I guess, and tried to go around me before it was safe to do so. He ended up colliding with a tree, and when I looked back I saw that he had bloodied his nose. I guess the one second wait was too long for him.


Towards the end of the lap, the MadSS came by again. I rode with him for a while somehow, and I stayed pretty close until I got caught behind a group of riders. I eventually got around them, and that little distraction made the miles go by fast. All of a sudden I looked up and I was on the final climb out of the trail…and I made it without walking.


When I rolled out onto the paved road, I started picking up speed. Another rider crept by me, but I decided to shift into a higher gear and go for an all out sprint. I zoomed by him at full speed, and crossed the finish line.


I got lots of cheering from Shanna from Endless Bike Co., who did her best to keep us all going out there. 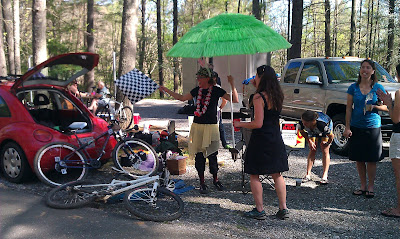 Thank you, I needed that. We all did.


I was finished, in more ways than one. Even though I only did three laps again this year, I still put in more miles since they lengthened the course. It was a small victory, but I was left feeling like I could’ve done better. Next time I’ll duck when I see low hanging tree branches.


On a side note, after the race I spotted some Bike29 socks out there, and they didn’t belong to me or Dicky. 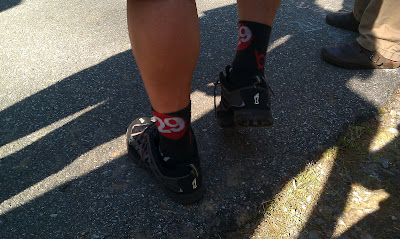 Speaking of Dicky, he seemed to have problems keeping his bodily fluids under control. 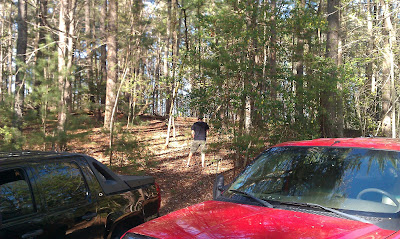 Glad he didn’t do that during the race.


So yeah, I “raced” for six hours and survived. That’s good enough to call it a victory I suppose. The course seemed much harder this year, and everyone looked like they had been to hell and back. We all had fun for sure, and I can’t wait to get back there again next year. Big thanks to the folks from the BMCC for putting on another great event.
Posted by TheMutt at 8:26 AM