Fun Is Always A Good Distraction 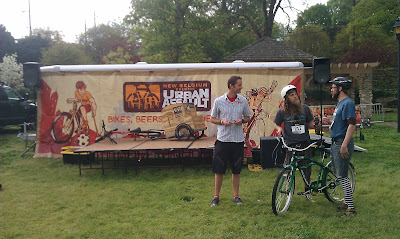 So yeah, I’m back. I had to take a few days off, because I didn’t really feel like talking about bike stuff. Thanks again to those of you that posted comments here and on Facebook, and also for the e-mails. I really appreciated it and it meant a lot. Things are still rough around here, but we’ll be okay.


And now, I’ll get to the report from the New Belgium Urban Assault Ride. It was nice to get out there for the day, and if anything it was a good distraction from what we had going on at the house. Lunchbox and I teamed up to ride, race, and have fun, and we knew it would be a good time.


We even dressed up for the occasion. 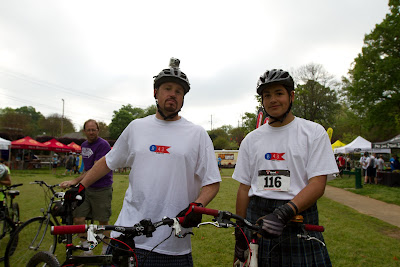 
Adorned in our man skirts, er I mean, kilts, we lined up at the start to begin our adventure across Charlotte. Since we were in the first group (thanks to an awesome score on the pre-race quiz), we got off to a great start. We headed out of the park and straight for the first checkpoint, The Mint Museum.


We got there ahead of the crowd, which was good because this was a tricky event (but a helluva lot of fun.) One rider had to dismount and stand behind a fence and lob belts (from the Gates Carbon Belt Drive people) to the other rider (carrying a foam sword of some sort) whilst riding around a flagged area. Lunchbox tossed the first belt and I caught it no problem, but the crowd starting moving in. Because of that I missed the next one, but quickly circled back and caught one. The goal was to catch two, so we grabbed our bead (to prove that we completed the checkpoint) and headed out to checkpoint number two.


After cutting through neighborhoods to avoid the off limits roads and such, we made it to Bike Source, and another challenge awaited us. This time, I had to bounce a tennis ball across the parking lot into a bucket, and Lunchbox could use a small board to help guide it in. The only problem was that the board had a tennis ball-sized hole in it. That one took a while, because I kept whizzing the balls over there like a major league pitcher. Eventually we got it, collected bead number two, and headed out.


The next stop was the first mystery checkpoint. This was a gamble, because there they gave you a clue as to where the second mystery checkpoint might be. There was a chance that we would have to backtrack, but when we got there we discovered that mystery checkpoint #2 wasn’t that far out of the way. The clue they gave was something like, “This was a popular camping spot in Uptown Charlotte.” Piece of cake, since I knew they were talking about City Hall and the Occupy Charlotte Movement.


We didn’t head right over there, since our pre-planned route would eventually take us near there. Instead, we made our way to checkpoint number three, Uptown Cycles, which was a challenge pretty much made just for us. One person stood on a skateboard, while the other tied a rope to the bike and pulled them around a course. Since we are both skateboarders and cyclists, it was right up our alley. We make it look way too easy, and laughed about how some people probably had a rough time. Of course I let Lunchbox ride the skateboard.


Unfortunately I don’t have a photo. There was one taken of us, but I can’t seem to find it anywhere. Maybe I will soon.


Anyway, we left outta Uptown Cycles, and found a convenient short cut to the next checkpoint. It wasn’t hard to figure out where we needed to go. 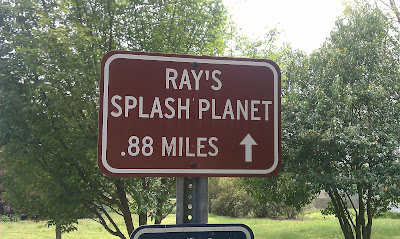 After a short, but fun greenway ride, we arrived at Ray’s Splash Planet and prepared to get wet. Instead, we found a challenge that was referred to as “chopsticks” awaiting us. 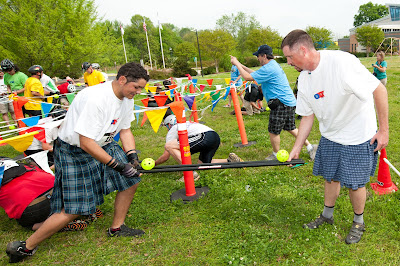 We had to balance two balls on two Yakima roof rack thingys, and navigate an obstacle course. Since we are both well over six feet tall, we had to try a few times before we finally made it. We gathered our bead and headed over to City Hall, which wasn’t really too far off of our pre-planned route.


There was no challenge there, just bead collecting. We took off from there and hauled ass to the final checkpoint, Smelly Cat Coffee. It was a bit of a haul to get there, but we rolled up and got ready for one of the most fun challenges in the race, the big wheel ride. 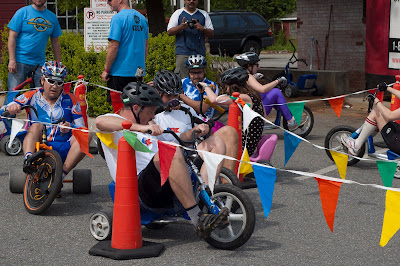 Lunchbox had a bit of a wardrobe malfunction, getting his man skirt caught in the wheel. I took the opportunity to ride past him, and he eventually tucked his kilt under him and kept going. When I finished the course, I tried to do a big ass power slide and apparently scared the shit outta the volunteers there. They all jumped in front of me to help me stop, but I was only trying to have fun.


We collected our final bead and headed back to the park to the finish. 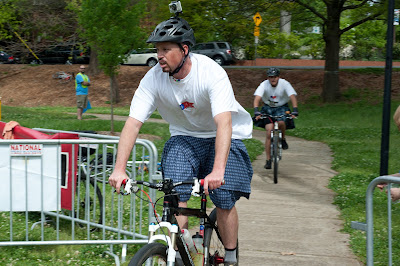 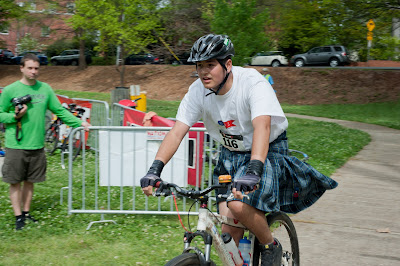 We rolled in and found out that there was one more obstacle, a giant water slide. We took off our kilts and emptied our pockets, and slid down to the finish. I found out later that we ended up 21st out of (I think) 92 teams in our class. Not too bad, especially since we weren’t all kitted up and serious like some of the higher-placing teams. We had a ton of fun for sure.


At the afterparty, I drank a few beers (my teammate is underage so I drank enough for the both of us.) There was another dance party, but I didn’t get up on the stage like last year. That was probably because Dicky wasn't there to influence me.


Instead, we just watched. 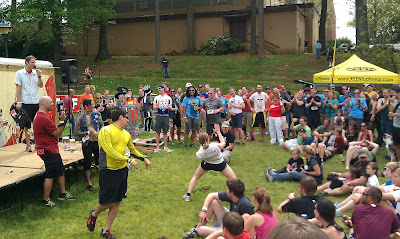 After the big dance party, we tried some of the other events, like trackstanding. Lunchbox did his first ever track stand, and held it for a while. 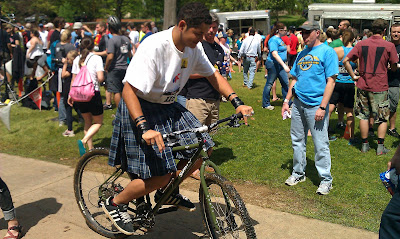 And who doesn’t like to wear a skirt and ride a really tiny bike? 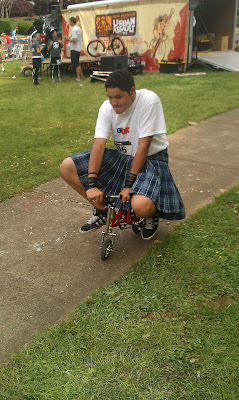 It was a lot of fun for sure, and it was good for us to be out of the house for a while. Lunchbox was an awesome partner, and he did a great job out there. I did run my GoPro the whole time, and when I get a chance I’ll go through the footage and maybe come up with a decent video.


I have other things to worry about now though. 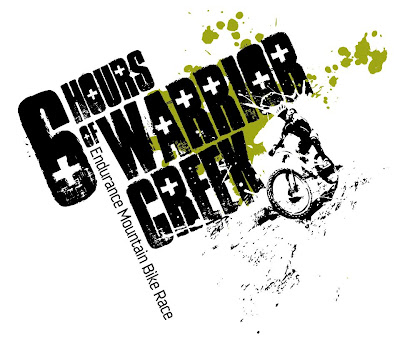 Yeah, with all that’s been going on I almost forgot that I have a six hour race this weekend.


Am I even ready? I guess y’all will find out on Monday.
Posted by TheMutt at 8:24 AM