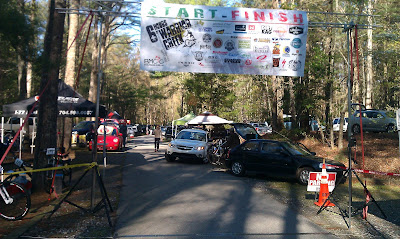 The 6 Hours of Warrior Creek was Saturday, and right now I’m feeling pretty good (sort of.) I knew that this early in the season I would be in for a sufferfest, but I really didn’t care. With all the stuff I had going on the last few weeks, all the training in the world wouldn’t have helped me. Before I got ready to race though, I added one important accessory to my bike. 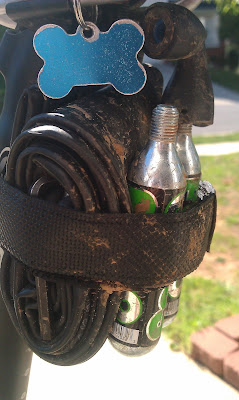 I decided that I should bring Roxie along for the ride. If anything, it would make all the suffering a little easier to handle.


After leaving the B-43 Worldwide Headquarters before dark, I eventually pulled into the Warrior Creek campground at around 7:00 a.m. I quickly setup my pit area, which was basically unfolding a chair, flipping down the tailgate of my truck, and dragging the cooler out of the cab. Simplicity at its best.

We eventually got ready to race, and I was sorta ready. I took off somewhere in the middle of the pack, and kept it slow and steady on the long intro before we got to the trail. When I finally got on the singletrack, there was a little bit of a traffic jam. I didn’t mind, because it kept me from going all out and running out of gas too soon.


Eventually, everyone spread out and I got into a groove. My legs felt great, and I was cruising along at a great pace. You know, I pace I felt I could do for six hours. About six miles in though, I was feeling a little too good. On one of the many bermed-out sections, a tree branch came out of nowhere and whacked me on the helmet while I was traveling at a high rate of speed. It made the most horrible noise (which scared the shit outta me), and I actually saw stars.


I didn’t crash, but I probably should’ve at least hopped off of my bike for a minute to recover. Instead, I kept going…like a dumbass.


I remember bits and pieces of the rest of that lap; including talking to people I knew that would pass me every once in a while. People seemed shocked that I was riding slowly on the first lap, so I had to explain that had my bell rung a few miles back. It was not a pleasant experience (the hit to the head or the constant explaining.)


I did at least get photographed out there though: 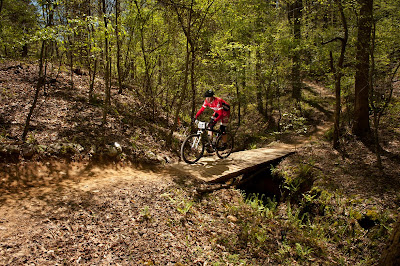 When the first lap was over, I made a pit stop. The problem is, I don’t remember much of it. All I remember is getting up from the chair, hopping on my bike, and going out for another lap. It was the actual getting to the pit part that slipped my mind. I was a little dizzy, but I thought I felt good enough to ride. My legs were still in good shape, and I kept a decent pace. It wasn’t super fast, but I did pass a few people here and there. I saw lots of folks that I know, and if they passed me, I hung onto their wheels for a bit. The MadSS let me ride along with him for a while, and gave me a little motivation. Also, I got to ride with Watts a few times, and he helped push me along.

No walking, standing, or stopping. I rode everything for two laps.


The legs were there, but the mind wasn’t.


I do remember stopping for a spell after lap two, and things were looking a tiny bit better. I ate a little, refilled my water bottles, and sat for a few minutes. I was no longer dizzy, but I had a raging headache. Like, the worst friggin’ headache ever.


I kept glancing at my dog’s tag on my seat, and that was enough to get me off my ass and go out for another lap.


I think that may have been a mistake though.


Trying to write a Monday morning blog post while still having a headache was probably a mistake too.


I’ll finish this off tomorrow…stay tuned.
Posted by TheMutt at 8:14 AM