Last night was the start of our local Wednesday night racing, better known as the Summer Series.  The whole family was set to go out and compete last night, but I ended up skipping it.  I showed up, but I was having some issues with my tires holding air.  After repeated attempts to get them to seal up in the parking lot, I decided to get out on the course and show my support for the rest of the family.  That’s right, Little Miss Sunshine and Lunchbox got out and raced.

It was a really good turnout for race number one. 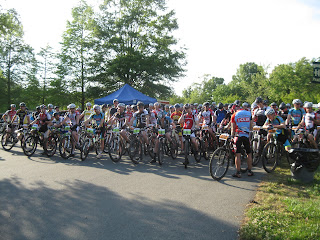 Lunchbox went out first, and tried his best to keep up with the fast little racer children that probably ride a lot more than he does.  He held his own at the start though. 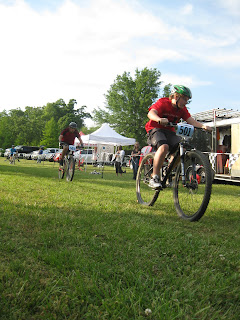 Little Miss Sunshine’s class went off right after that, and she was all smiles (even on her single speed.) 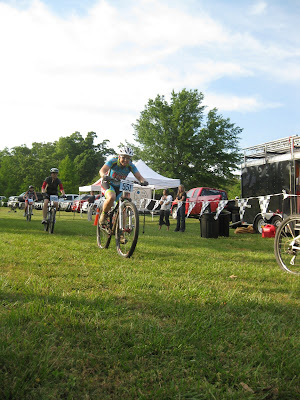 Since the trail is only three and a half miles long, I had to hurry up to find a good spot in the woods for photo taking.  I got there with plenty of time, and waited for Lunchbox to come screaming by.  Instead, I saw a bunch of kids in his class go by, and even the women in the class behind him starting riding through.  One of those women was my little lady. 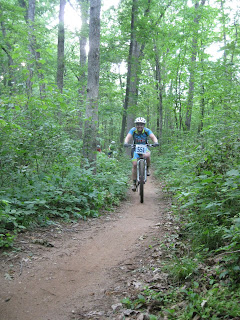 She was still smiling.

A little while later, Lunchbox came flying by. 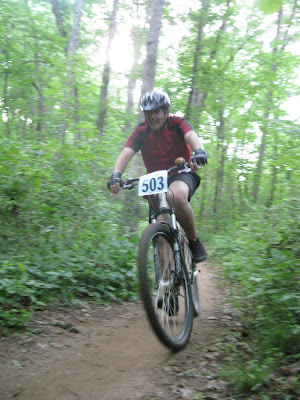 I asked if he was okay, and he told me that his chain dropped off, and that he had to fight his way back in the pack.  He said he passed two kids already, and that put him in fourth place.

I cut through the trail and caught him heading back down the hill on lap two, and he was trying his best to make up for lost time. 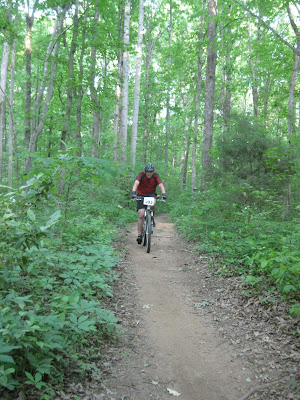 I went back to my old spot for photos, and caught the little lady finishing up her last lap. 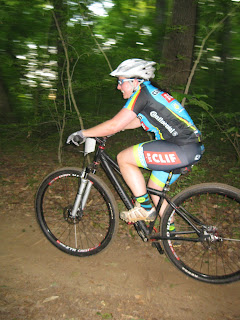 She was still smiling, and I found out later that she sprinted for the finish line.  She missed out on third place by a nose, but she was still happy to finish fourth on her SS.

Not too long after, Lunchbox came rolling by again.  He was still in fourth place, but was closing the gap on third.  Unfortunately, there wasn’t enough trail left for him to catch up.  He had to settle for fourth place, which is his best race finish to date. 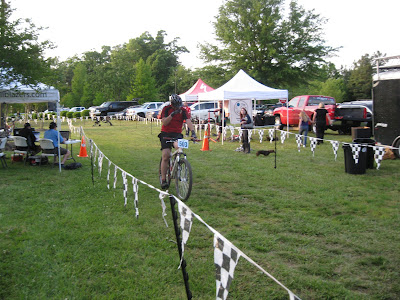 Both of them are really motivated now, knowing that it will only take a little more effort to get on the podium.  I’m really proud of them for getting out there to race, and I was more than happy to sit this one out and spectate.  I’m not the greatest photographer (which is why my kid usually takes all the pictures), but I enjoyed being able to have the chance to document their races.

This is a fifteen race series, and I;m sure they will both be back to tear it up again.  I plan on using a few of these races as a tune up for the Southern Classic Series, so expect me to get out there a few times too.

It’s always fun when your whole family can get out and do stuff like this.  Most families don’t do much together other than watching TV, so anytime something like this is available it’s a good thing.