Run What Ya Brung 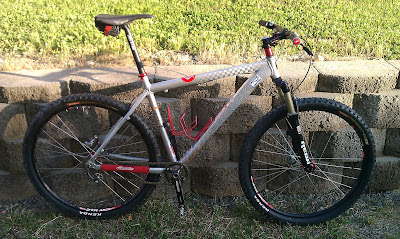 Yes, I decided to “race” my single speed down in Spartanburg for the Stump Jump. Since they were calling for shitty weather with sub-par trail conditions, I figured I might as well do something different. Also, I think I may have been taking myself a little too serious lately, so riding on only one gear would knock me down a peg or two.


It was like bringing a knife to a gunfight.


Seventeen of us lined up at the start, and I got a lot of comments about how crazy I was for riding a single speed in my normal class.


We took off from the line, and I got to mashin’. I ended up somewhere up front (third I think) and kept going. This was different than my usual “take off like hell and blow up strategy”, since being on the SS kinda made me ride faster up the gravel climb yet keep a good pace. When it flattened out, I had no choice but to let a few guys by. I was still with the leaders though when we took the first downhill. 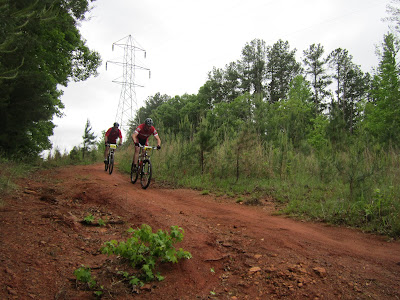 
When we got to the really flat stuff, I was spinning like a hamster on a wheel. My 32X18 gear was good last weekend when I rode down there with the family, but it wasn’t enough for a race pace. I lost a few places again, but somehow managed to stay with the group. The only thing good about being on a single speed was hitting the climbs. I had no choice but to haul ass up them.


The course is mostly flat, and I was spinning so fast that it was making me tired. The climbs didn’t bother me, but the fact that I was actually wishing for gears did. When I hit the last section before the start/finish line, I was happy to have more climbing ahead of me. 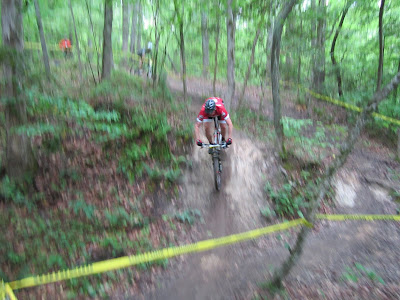 Lunchbox was starting to have camera issues for some reason.


There is a long, gravel downhill on the way to the start finish line, so I coasted down until I hit a small climb. I mashed my way up it, through the start/finish line, and headed back out to the trails. I was working my ass off. In fact, I was probably working a lot harder that I should have been.


Lap two was okay, but the flat sections were wearing me the hell out. I could feel my calves cramping a little from spinning so much, but there was nothing I could do about it. I found myself wishing for more climbing, and smiling every time anything resembling a hill appeared.


The second lap was dragging on, mostly because I was still spinning my ass off. At one point, I flew around a corner, tried to mash to gain some speed, and washed out on some leaves. I whirled around and slammed my bike into a tree, scraping my knee on the trail.


The bike was fine and my knee was okay, but my right calf cramped up so bad that I couldn’t get up. I massaged it for a minute and got back on the bike…proceeding to spin my ass off again. The cramping didn’t really affect me anymore, and luckily I had a few more climbs until the end. 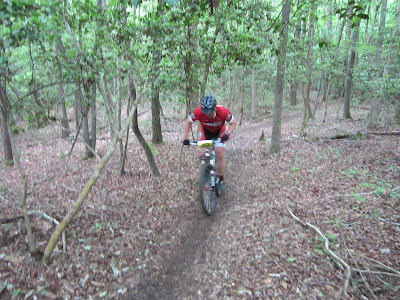 And luckily Lunchbox was there to document it again with his malfunctioning camera.


I got out on the gravel road, and another guy in my class went by me. I tried to sprint up to catch him, but he was cruising along effortlessly in his big ring, while I spun away into oblivion. I crossed the finish line, and had no idea where I finished.


I later found out that I ended up 12th, and actually beat quite a few people that had a full compliment of gears. Upon further inspection, I also found out that I missed the podium by only six minutes. That was most definitely due to my lack of gears.


It was definitely a learning experience, and I really did enjoy riding my SS out there. Next time I’ll probably ride with gears on a flat trail like that, but I still find myself loving single speed riding more and more. Maybe a smaller cog on the rear is in order. Speaking of single speed cogs, Shanna from Endless Bike Co. was out there again, showing the race world how cool single speeding can be. 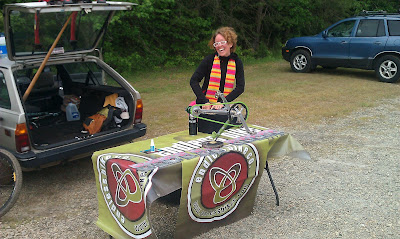 As for the rest of the Southern Classic Series, I really need to take a step back and think about how serious I’m trying to be. I enjoy the races, the travel, and the other people I get to ride with, but maybe I should take time to actually enjoy riding my bike. I’m not dropping out of the series though. Hell no. I plan to finish the series, but maybe I’ll stop being all “racy.” From now on, I’ll go out there and give it my best, and see what happens. First and foremost though, I’ll make sure I have a good time out there.


Hell, maybe I’ll bust out the SS every now and again too.


It might be like having a knife in a gunfight, but at least I can throw the knife at the other guys first and hope it sticks.
Posted by TheMutt at 8:32 AM

Thanks for bringing the SS! Lol really man, you kicked ass with it. It took me forever to get round you. I got me chasing you on camera for about 2 miles in. I'll send a clip once I get my computer straighten out. Good Luck at Columbia and I'll see you at Hobby. Jack