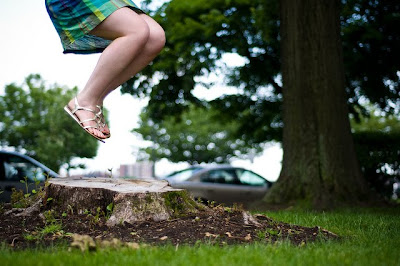 This weekend, it’s time to get back to the Southern Classic Series. Next up in the series is Stump Jump down in Spartanburg, SC. 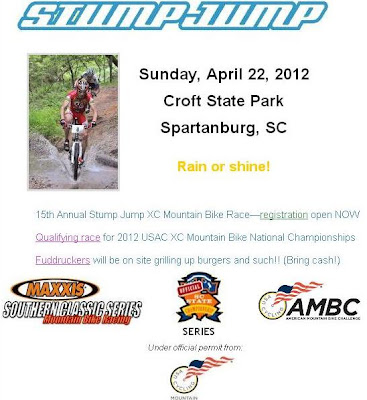 Since I was just down that way last weekend, I have a pretty good idea what I’m in for.

Rain or shine, huh? It’s looking more like rain. Here’s what I found on The Internets: 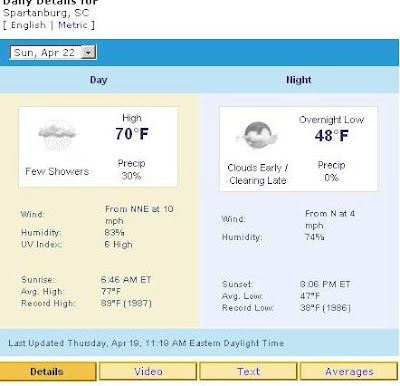 Yeah, the weather report keeps changing, but they still keep predicting rain. I think the trail was a little wet last year when I raced, and I don’t remember it being too back. However, I didn’t actually race it in the rain. That could hamper my ability to haul ass on the long, flat, swampy sections. I’m sure I’ll be fine though.


Sunday also marks the debut of Little Miss Sunshine for the series. She’s a little nervous, but I know she’s ready to get out there and race. Lunchbox also considered slapping a number on his bike, but decided that he could do a much better job out there taking photos. He’s bringing his bike and riding the course, so keep your eyes peeled for him.


He likes to hide behind things so you don’t know he’s there. Say hello (if you can find him) and he just might take a picture of you. Who knows, I may even mention you here on this very blog.


That’s pretty much it as far as plans go. I don’t have any other big rides planned. In fact, I’ve only been doing short rides this week, so I’m hoping that the rest will do some good. Last year, I took off too fast from the start line and blew up pretty quickly. That’s usually how I race, but I’ll try to change that this weekend. I don’t have any high hopes for getting on the podium, but if I pace myself in the beginning I may just be able to turn it on and finish strong.


Of course, there will be a report on Monday.


Maybe I will see you in Spartanburg.
Posted by TheMutt at 8:39 AM