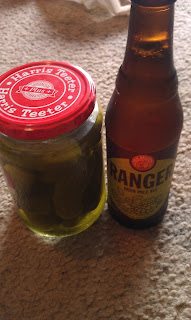 Does not a make a good race strategy.

The 6 Hour Grind On The Greenway kicked off Saturday morning, and I was as ready as I thought I should be.  I haven’t been on the bike much, but I wasn’t worried about that.  These kinds of races are mostly mental anyway, and mentally I was prepared to ride for six hours on my single speed.

We got there with plenty of time to spare (thanks to Dicky making me pick him up at 7:52 a.m.)  The MadSS saved a spot for us, although he wasn’t racing.  He was there to support his wife, and it turns out that he would support me as well.  He’s all into that training stuff, and he has a lot of good info that I should probably listen to.  After picking up my race number, shooting the shit with the other racers, and getting my stuff ready, it was time to line up. 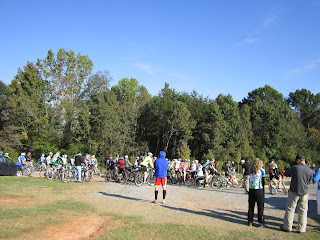 I forgot to eat breakfast before I left the house, so I wolfed down a cereal bar and a Honey Stinger waffle before I rushed over to the mass start.  We rolled out, and I tried to heed the advice from the MadSS to not get caught up in the sprint for the woods.  I couldn’t really keep up with most of the geared riders in the beginning anyway, but once we hit the course I was pushing hard.

I got in a group, and we were making good time. My legs (and lungs) felt good in the chilly morning air, and I was riding a lot harder than I normally would for an endurance race.  Riding in a group was frustrating though, because everyone kept riding their brakes on the downhills.  Knowing I needed momentum to carry me up the climbs with only one gear, I took off and passed everyone in the group on a climb.  I tried to put in a gap on them so they wouldn’t have to pass me again, and the result was a super fast pace.

Way too fast for my big ass.

I started catching (and passing) lots of riders on the first lap, which is unheard of for me in a six hour race.  I thought about backing off, but I couldn’t bring myself to do it.  I was feeling too good to slow down.  I was on schedule to finish the first lap in well under an hour, and just as I rode the last section of singletrack I saw Lunchbox hiding in the bushes. 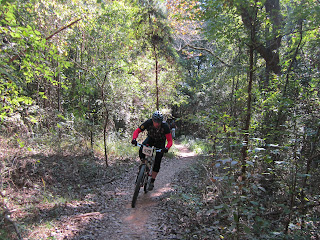 I rolled into the pit area, and the MadSS asked me what I needed.  I told him I required a beer, and he grabbed a tasty IPA from the cooler and opened for me.  I chugged it down, and he noticed that I had barely touched my water bottles.  He told me I should drink more, and I said I would.  It was a mistake that would bite me in the ass later.  I ate a couple of pickles and rolled out to hit the course again, determined to slow down a bit so I could last all day.

Doug (who finished the first lap right behind me and was also in the group I rode in), rolled out right behind me.  I told him that I couldn’t run that same pace again for the second lap.  I was full of shit though, because I pushed it even harder this time around.  My pace felt way too fast again, and about halfway through I felt my legs cramping a little bit.  I ate some Honey Stinger chews and another waffle, and made sure to drink both of my water bottles during the lap.  On the last climb out to the start/finish line, my leg cramps hit me full on.  I barely had enough power to make it up the small hill.

Pulling up in front of my tent, I couldn’t even get off my bike because the leg cramps were so bad.  The MadSS told me I was overheating (it had warmed up a bit), and that I needed to cool down.  I pulled off my DeFeet arm and knee warmers, and drank another beer.  The MadSS put some ice in the center pocket of my jersey, and told me that it would cool off my ass crack.  Although that sounded like an odd thing to cool off, I didn’t argue.  He really knows what the hell he’s talking about.  I ate some more food (including another pickle), and drank some water and orange juice.  I rested a lot longer than normal after that lap, and I pretty much had to get kicked out of the pit to get back on the trail.  I was hurting far too early in the race, and I wondered how much more my body could take.

I eventually rolled out for lap number three, and my legs felt a little better…

I once killed a 6 Hour race existing solely on coke and pickle juice. Excited to read your part 2