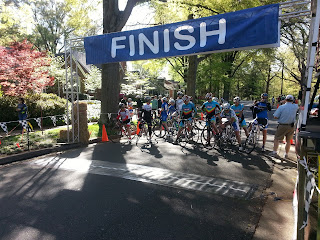 I learned something over the weekend…

I should never race my bicycle on the road.  While I’m sure to forget that lesson and do it  in the future, right now it just seems like a really dumb thing to do.  I spent all day Saturday on medic duty at the 40th Annual Dilworth Criterium, and I was busy as hell.  I barely got my stuff unloaded from the truck when I had to tend to a kid that wrecked.

On the second lap of the first race.

It didn’t ease up from there, either.  I roamed the course on my mountain bike (it was easier to cut through the park and get anyway I needed to be) and I was busy pretty much the whole day fixing boo boos from crashes.  These guys (and gals) seem to have worse injuries than I normally see on the mountain bike trails, and that’s probably enough to keep my dumb ass from ever trying to get involved in road racing.

The first kid ( a junior racing in the Cat 5 men field) hit the curb and went over the bars.  He rolled and landed on his but, which really saved him from any serious injuries.  His dad was there though, and dealing with a parent that gets in the way is way worse than any serious injury.  The kid was okay, and even raced later in the junior field.  He was a little sore, but didn’t even get a speck of road rash on him.

Speaking of road rash, that’s what I did for most of the day.  One girl (who was in the lead) wrecked in a high speed corner, and got pretty scraped up.  She also cracked her helmet, but it looked to me like she didn’t suffer a head injury.  She was convinced to go to the hospital later though, because there may have been a small fracture in her hand.  At least she was in good spirits though.

During the last race of the day (Pro and Cat 1,2), I thought I was pretty much finished.  Everyone told me that these guys are more experienced, so I shouldn’t see any crashes.  A couple of laps in though, a guy wrecked.  He got up and decided to get back in the race.  He said he would come back and see me later.  When the race was coming to a close, I was standing around waiting for that lone injured rider and I saw another crash.  Second place guy got a little out of control, and he took out third and fourth place.  Their race was over, and gave the injured guy from before a chance to get on the podium in second place.

When it was all said and done, I was working on four people pretty much all at once.  It was a busy day, but I was glad to be able to help.  And, it keeps me in check when I even think I want to try that dumb shit.

I’ll just stay on the trails for “racing.’

Since I bored you to death with my shitty words today, I’ll at least share the photos I took during the very little free time I had. 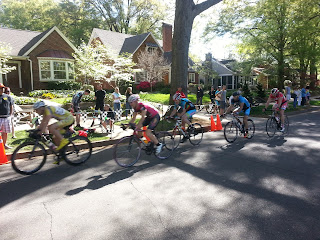 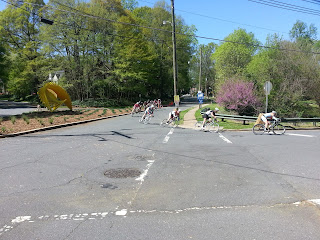 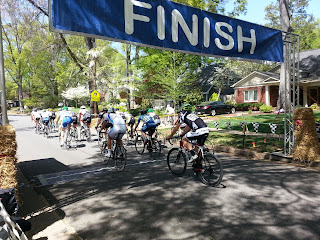 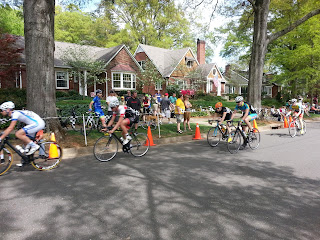 I packed up my shit afterwards, and the fellas and I met at a local watering hole to plan our next adventure…

I’ll get into that tomorrow.