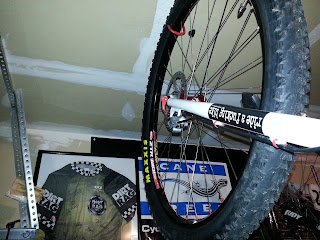 After spending Saturday building a bike and most of Sunday working, I thought that it might be time to get my shit together.  I started off by working on a bike that I hardly even ride…TK-421.  That’s my geared bike (the white Niner Air9) in case you can’t remember. I gave it a bath, removed and regreased parts as necessary, and finally got around to changing out the seat. 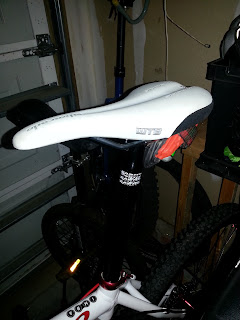 I had been running a WTB Valcon for the last year or so, and I finally figured out that I don’t like it.  It’s not very comfortable, and the weiner slot didn’t serve any real purpose.  So, I put it on my road bike (which gets ridden even less than TK-421). 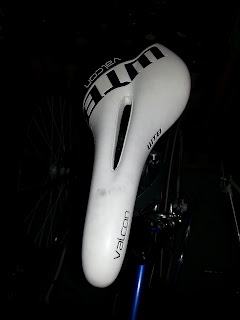 The WTB Silverado that I took off of the road bike is my favorite seat, mostly because that’s what I run on the Falcon.

The Falcon is the SS bike.  Pay attention.

Anyway, who knows when the hell I might ride either of those bikes again, but when I do I’m sure I’ll notice a difference.  Having a familiar seat on TK-421 will be nice, and having an uncomfortable seat on the road bike will suck.  Riding a road bike sucks anyway, so it fits.  The Falcon got some love too, but I didn’t think you needed to see another photo of a freshly washed bicycle.

In other news, I’m considering a change in my brand of pedals.  I’ve been a big fan of Crankbrothers for a while now, but having to replace those frilly little brass cleats more than once a season is starting to get on my nerves. 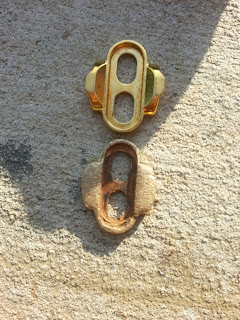 I know I’m pretty rough on shit, but I’ve never had to change the cleats out when I rode Shimano pedals.  I’m not even sure why I switched, although it was probably because Dicky told me not to.  One of these days I might listen to him.

But hey, at least they have great customer service, right?  (Where the hell is the damn sarcasm button?)

Come on, Internets, tell me what I should do.

I still have a ton a shit to talk about, but I’ll hold off for now.  We did a group ride last night, I have another endurance race this Sunday, and there are so many other things going on that I can’t even keep up.

And that, my friends, is why I write this crap every day.

Just so I can remember.