Last night, we got to ride.  We showed up and the trails were open (although they were devastated from a “race.”)  We had a great time for sure, but that’s not what today’s post is all about.

Saturday, we had another group ride planned (I mentioned it Friday.)  With shitty weather leading up to the weekend, we thought the trails would be closed at the .  Much to my delight, they were still listed as open.  The Lowcountry Crew was on the way up here from , and our usual group started rolling in from various parts of .  As soon as I got to the gate though, they closed the trails.

“When did they close?” I asked the attendant.

Shit.  I went in anyway, since everyone else was still on the way.  I saw a few folks coming back from riding, but since the trails were “closed” I knew we coulnd’t go out.  However, there was a running event still going on. 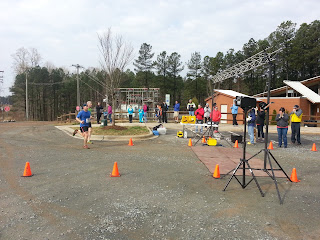 Really?  No more rain that day and plenty of sunshine wasn’t enough to keep the trails open, but if we put on running shoes we could’ve used the trails.  According to Twitter (and also real live people on the scene that had their riding plans shot down for the day), the local MTB community was pretty pissed.  We stewed about it for a bit and came up with a backup plan.  With reports of dry trails up north, we all hit the road and drove up to Signal Hill in .  Irish Luke and Eastwood hadn’t been there yet anyway, so it seemed like a good plan.  The Lowcountry Crew continued on across towards FATS, so we’ll have to meet up with them some other time.

After a quick trip up the road we were at the trail.  And this time I brought my GoPro.

Yes, another shitty video from the folks here at B-43.

After a fun lap on a dry trail, we grabbed some beer and headed over to First Flight Bikes to hang out for a while.  We decided that we hadn’t ridden enough for the day, so we took the party over to .  I ran my GoPro there too, but the video isn’t done yet.

We had fun, and I wore myself out.  It wasn’t the “epic” ride we had planned back in , but it was still pretty good.

Was it enough to get me ready for the biggest race of the season (the 6 Hours of Warrior Creek) this weekend?

I guess I’ll find out for sure in a few days.  And of course I’ll talk about it later.

Look forward to meeting you at WC - have a great race (and please try not to run over this old lady; in turn, I'll try to stay out of the way)!