I Had A Race

And the only thing I got was this t-shirt. 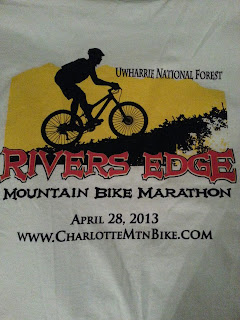 That was the only photo taken that day too, so bear with me.

Yesterday morning, I got up early to head over to the for the Rivers Edge Mountain Bike Marathon.  It was really difficult to drag my ass outta bed, but I’ll get into that another time.  I ended up hitting the road solo, because Lunchbox was a little worn out from working the day before.  With rain in the forecast, I thought that it was pretty wise for him to stay home.  I know he’s there for every race I do, but who the hell would want to stand around all day in the rain watching someone attempt to race for 55 miles?

Anyway, I got there with plenty of time to spare, got myself registered, and setup my tent.  My pit would turn out to be a community effort, with Good Guy Greg, Big Crom, TomTom and Megan, and Irish Luke using it as a base of operations.  This would be my first attempt at this race, and doing it on a rigid single speed made me a little nervous.  I had no idea if I could even complete that distance at all.  At least it wasn't raining though.

We took off from the start, and I slowly rolled up the fire road to hit the trail.  When the singletrack started, I entered dead last.  That was because I was running a 32X21, but mostly it was my desire to take it easy so I could last the whole time.  Once we hit the first climb though, the “racer” in me took over and I started passing a few people.  It was your normal stop and go race traffic, but it didn’t annoy me this time.  The plan was to have a little fun while I was suffering, and I would try to stick to that no matter what.  It didn’t take too long to finish that first lap, and I crossed the start finish line in a decent amount of time.

I stopped for a few minutes to eat something small and refill my bottle, then I was back in the saddle.  I pushed the pace a little harder this time, because that first lap didn’t seem so bad.  About halfway through it though, my lower back started to hurt…bad.  It was locking up as I mashed my was up a long climb.  Good Guy Greg was right behind me, and near the top I heard him say, “Fuck it.”  He had decided to back off and walk instead of trying to keep up with me, which was unnecessary because I had to hop off my bike right after that.  I couldn’t even stand up straight, and I started to wonder if I could even finish that lap, let alone the whole enchilada.

My day had gone to shit already, it would seem.

I stretched for a few minutes, and I felt like I would be okay to get back on the bike.  I hit the downhills as fast as I could, and it didn’t take long before I started feeling a little better.  I could feel my back getting tight again though, but somehow I managed to finish the lap without walking.  It was at that point that I decided that I wouldn’t give up even if it took me all day.

I took some ibuprofen, stretched a little more, refilled my water bottles, and hit the trail again.  I took it easy on the climbs, and that proved to be a good idea.  I was faster than ever on the downhills, mostly because I knew with my large size I had an advantage there.  The rest of that lap was uneventful (pain-wise anyway), and I crossed the line once again and headed to my pit.

I had already passed the more than halfway point, so I knew there was no turning back.  I refilled my bottle again, grabbed a little bit of food, and after taking a short bathroom break I was ready to go.  However, I think I was there for a long time, because it seems like that stop took forever.  Mentally I was already drained, and I wandered back to my bike in a haze.

I was now on autopilot.

And this is where I leave you today.  With no photos, I won’t make you read more than you can handle.  Hell, I probably lost you already.

You've got me at the edge of my seat!