But it was fun.

I don’t remember much about my fourth lap at the Rivers Edge Mountain Bike Marathon.  My mind just wasn’t there, although I was somehow able to hit the downhills at high speeds.  I even climbed a lot, with the exception of two long hills.  I kept telling myself that all I had to do was complete the fourth lap and go back out, and there would be no way I could DNF.

That was my plan, and I tried my best to stick to it.

I mashed, I spun, and I hurt like hell.  My legs felt okay for the most part, and I hadn’t had any issues with cramping.  I was properly hydrated, so much that I had to stop once to relieve myself.  I don’t have any specifics from that fourth lap, except that I kept hearing voices when no one was there.  It wasn’t the gentle roar of Bigfoot either.  It was real, human voices having conversations.

But, there was no one around me at all.

My mind was playing tricks on me, but never once did it tell me to quit.  As I neared the last section of trail before the finish line, I looked down at my bottle cages and noticed that I had plenty of water left.  I made the decision to roll right through the start/finish line and bypass my pit when I got there.

I headed out for my fifth and final lap, knowing that once I started I wouldn’t quit…even if I had to walk the whole damn thing.  As soon as I hit the singletrack, it started raining.  I smiled and told myself that it was good, because it would break of the monotony of riding the same course all day.  The rain came down harder and harder, and I used that as motivation to keep going.  I had to walk the same two climbs again, but the downhills were once again my strong point.  My Maxxis Ardent was providing plenty of traction up front, so I was able to go as fast as I wanted to go around the wet berms.  I owned that trail for that brief moment in time.

The rain was cold, but it seemed to help my legs.  I was pushing along at a steady pace and I would find out later that the final lap was one of my fastest.  On one of the last downhill sections though, I thought my arms were gonna fall off.  Holding on for dear life on a rigid fork all day over rocks and roots had taken its toll on me I guess, but since I was close to the end it didn’t matter.  With the finish line in sight, I started smiling a little bit.  I did what I had set out to do, which was ride my bike 55 miles in the (I actually ended up with just a hair under 58 miles.)

Unfortunately I missed the podium. 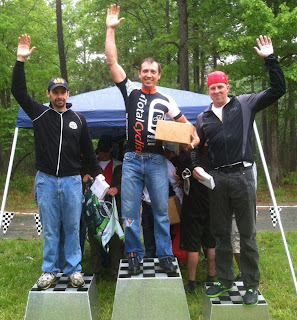 That’s the MadSS on the top spot, and Big Crom in third.

Hell, I missed the whole ceremony.  The super fast guys finished before I even went out for my last lap, but I bet I had more fun than they did.  While I heard some people saying that they were glad they finished before the rain came down, I was happy that I got a chance to ride in it.  It made my race a lot more fun and challenging which is the sole reason I was out there in the first place.

It’s not like I had a shit performance though.  I ended up in 5th place in the single speed class, which probably sounds good unless you take into account that there were only five single speeders in the whole race.

Nah, it was a good thing.  I set out to see if I could even finish that race, and not only did I finish, I felt pretty good afterwards.  My back issues never returned, and I only had a small amount of muscle soreness the next day.  Besides, I probably drank more beer than anyone else out there that day.