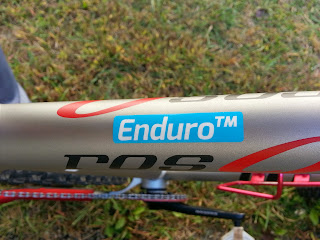 Since I have an Enduro™ approved bike though, it soon will be.

The new ROS9 is done.  Wednesday night after work I went over to Casa de Dicky to drink beer, I mean convert my wheels to thru axle.  I got home and attempted to finish the build, but had an issue with the rear brake hose routing.  My never-cut hose wasn’t long enough, and after a couple more beers I just couldn’t get creative enough to find a solution (other than waiting for a new, longer hose to magically show up.)  So, I waited and picked up where I left off the next morning.

After Lunchbox headed off to school, I got back to work.  I came up with a sorta good idea to route the hose in a most unconventional way, until which time I can obtain a new, longer hose.  That particular part of the bike doesn’t look pretty, but it will work for now.

And it’s good enough to be Enduro™. 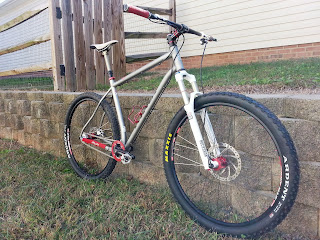 You might notice some extra (previously unmentioned) shit on there.  That’s because Dicky was kind enough to let me test out a drooper post to be even more Enduro™.  It’s the fancy Thompson one, which is probably way too fancy for me. 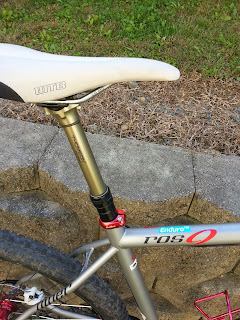 Originally I wasn’t gonna build this bike with one, but after getting a chance to try one out for a while, it looks like a drooper post will remain a permanent part of this bike from now on.  I’ll get my own eventually.

Instead of taking my new bike up to the hills for a test ride, I decided to stay local.  I pissed away too much of the day to go out of town, and I needed to go by The Cycle Path anyway to order a new brake hose.  While I was there, all I heard was how big of a bike it is.  I always ride an extra large frame anyway, but this thing is huge.  The big 140mm fork and 780mm wide Niner bars probably have a lot to do with it I guess.  I’m not complaining at all, because it actually fits me quite well.

Just for poops and hahas we decided to throw it on the scale to see what it weighed. 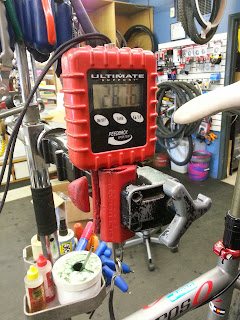 Not bad for a big ass bike I suppose, but it’s almost ten pounds heavier than my rigid single speed.  Hopefully that means it can take some abuse.

Since I was on the north side of town, my first ride took place at Fisher Farm.  It’s not super tech and doesn’t have a lot of mileage, but I’m familiar enough with it to get in a proper test ride.  Plus, I rode the last demo ROS9 there and it was good enough. 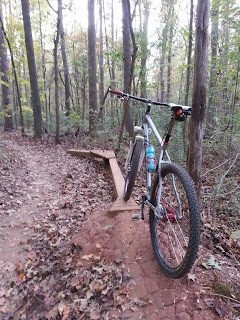 There are lots of fun things to play with out there, and it was enough to tell me that I just built a really fun bike.  Sure, it’s made for riding up in the hills, but I won’t hesitate to take it local and shred the gnar.  I know it’s way too much bike for around here, but I don’t really care about that.  I'm all about the fun these days.

In other news, The Backyard Experience is this Sunday.

Are you registered?  Why the hell not?  Are you afraid to “race” out there?  You shouldn’t be.  But if you are, come out and join us while we politely toss waffles in the general direction of those that are racing.  It’s gonna be a hoot, and you won’t want to miss it.