Five o’clock in the morning seems to be much earlier on a weekend for some reason.  I had no choice to get up that early to make it in time to the start of the Brunswick Brawl, and even though Lunchbox did have a choice, he was up with me.  We loaded up the bikes and headed three and a half hours southeast down near Wilmington to the Brunswick Nature Park, where Eastwood and his better half had already staked a claim on a primo pit location.  I knew it was gonna be a good day, since I had fueled up on the way down. 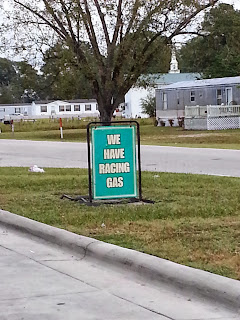 Shhh, it’s my secret weapon.  I planned to lay a cloud of stink all over my competition.

Registration was quick and painless, even with the sweet new tattoo they gave me. 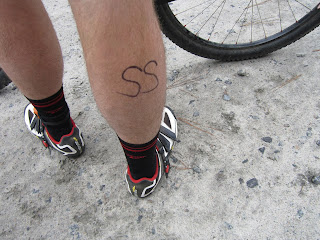 Before I knew it I was getting ready… 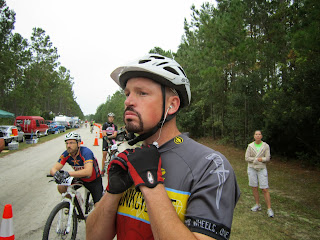 And it was time for the pre-race meeting. 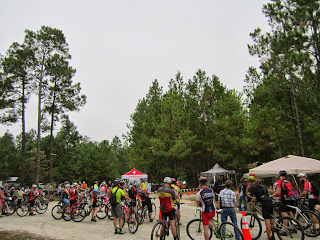 It was the same old instructions for pretty much every race I’ve ever done, so I started looking around for alligators.  I didn’t want a mean one to sneak up on me on the course.  They didn’t say anything about that in the meeting but I was concerned just the same.  Mama says alligators are ornery because they got all them teeth and no toothbrush.

This guy said it’s because they have an enlarged medulla oblongata. 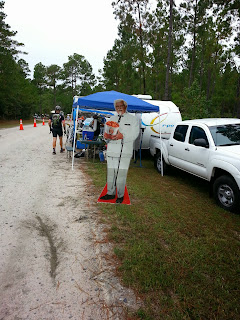 Where was I?  Oh yeah, it was time to go.  A few minutes after ten, we took off.  I told Eastwood prior to the start not to get caught up in all that “racing”, and to just find his own pace.  What I should’ve told him was to “not do the dumb shit I do.”  I spun like crazy to get up in the front of the pack, which was apparently too quick for Lunchbox to get a photo of me. 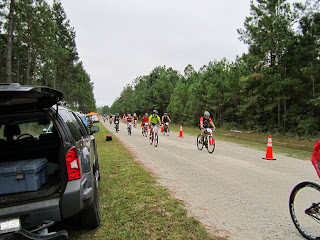 I went into the woods up near the front, my only goal being to make people work to get around me.  A few people with gears did just that when they could, but I was moving along pretty quick in the woods.  It was too quick though, because pretty soon I saw Eastwood pulling up behind me just as I was starting to slow down.  I was already worn out, my body shocked from putting out so much effort without being ready for it.  I pushed it even harder though, and eventually I found my groove.  I was trying to be careful since I didn’t know the trail, but I was still quite reckless.

I passed a few people here and there, and a few passed me.  I was holding my own on too small of a gear and on unfamiliar trail.  Before I knew it (about forty minutes later), I was on the fire road and nearly finished with lap one.  I had only consumed half of a water bottle, so I decided I wouldn’t stop at the pit.  I blasted by and got ready to hit the now familiar trail. 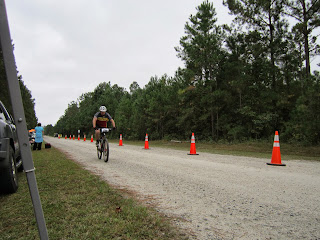 I settled into a good pace, pedaling the whole time since it was pretty flat.  There were barely any climbs that required standing, so I was in for a long day in the saddle.  Lap two was about the same pace, and by that time I had finally finished one water bottle.  I passed the pit again (at a little under the hour and a half mark), tossing my empty bottle in the grass nearby.

Lap three was just the same, except that we were a little more spread out.  Once in a while someone with gears would fly by, and occasionally I would pass someone just a bit slower than me.  I was feeling pretty damn awesome with three laps in, and with another half of a water bottle consumed I blew by the pit again and headed out for lap number four.

That’s when my fast pace started to get to me.  I didn't think I was really slowing down, and I could definitely feel the effects of spending all that time in the saddle spinning like crazy.  My neck was getting a little tight from taking a beating with the rigid fork (it was kinda rooty out there), and I was starting to get a wee bit tired.  I ate a couple of Honey Stinger shots when I had the chance, and finished the rest of my second bottle.  I tried not to slow down anymore, and when I got on the last section of singletrack I saw my kid there waiting for me. 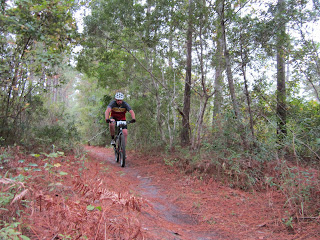 Four laps in, and I had been out there a little under three hours.  I was on pace for eight laps, but since I was out of water I had to stop for a refill.  I took that opportunity to eat a little more, and with all that shit sloshing around in my stomach I hopped back in the saddle and took off again.

I was halfway through, and hoping like hell I had it in me to keep up such a ridiculous pace to finish.  My legs felt pretty good still, and even that pesky shoulder injury didn’t bother me.  With the cheers of the bystanders near the star/finish line firing me up, I gunned it through the woods on lap number five.

I’ll finish up tomorrow.
Posted by TheMutt at 8:22 AM