Riding through lap number five, I figured that with a little under three hours to go I could get at least three more laps in.  With only one rest stop after four laps, my body didn’t really seem to mind me keeping pretty much the same pace as before.  I knew the trail very well at this point so there was no holding back.  It was a lonely lap though, since I only saw two people (one passed me and I passed another.)  Before I knew it, I was getting close to the gravel road to finish the lap.  Sticking with the “drink only a half bottle per lap” strategy, I passed the pit area and kept going. 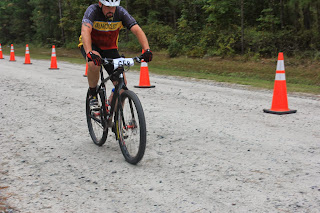 On lap six I was getting back into a groove but I was still pretty much all alone.  It’s really difficult to motivate yourself when it’s just you out there, but I tried.  I was happy to see someone out there taking photos, because it gave me some company for a couple of seconds. 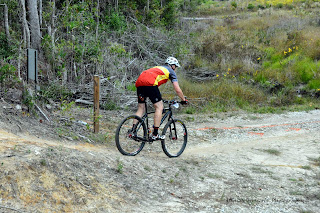 I felt myself slowing down a little bit, and I’m not sure why.  I have to admit though that I was a little bored and I wanted to quit.  I was tired, but not bad enough to need rest at that very moment.  The one good thing is that my shoulder didn’t bother me one bit.  It was pretty much all mental from there on out.  As I hit the last section of singletrack before the pit area, I looked down at my Garmin and saw that I had about fifteen minutes to cross the line before the cutoff for last lap.

As I passed the pit, I thought about stopping for a couple of minutes and “unintentionally” missing the cutoff time.  I thought better of it, and decided that I was gonna give it everything I had.  As I crossed the start/finish line thinking I had made a bad decision to keep going, I saw someone running up to the course tape with a cup in their hand yelling and screaming.  It was my buddy Lowcountry Joel, and he gave me a homebrew hard cider handup.

I grabbed the cup, slurped down that tasty alcoholic goodness, and tossed the empty behind me.  Suddenly I perked up like Popeye eating his spinach, and gunned it through the first section of singletrack.  It seems that I now had some motivation.

I hauled ass as fast as my legs would let me, knowing that every time I passed a section of trail it would be my last for the day.  I was yelling and screaming around every corner like a kid at a playground, and jumping over every little root I could find just to have a little fun.  One root in particular sent me up in the air quite a bit, and I came down just inches in front of a copperhead stretched across the trail.  I had no choice but to run him over.  Somewhere out there is a snake with a Maxxis Ardent tire print on his head.  I felt bad about that for a little while, but I got over it.

Coming up to the last section of trail, I was getting tired and cramping a little.  I knew the end was near though, so I picked up the pace.and gunned it for the gravel road.  I sprinted down towards the finish line as fast as my one gear would let me and as usual Lunchbox was waiting there for me. 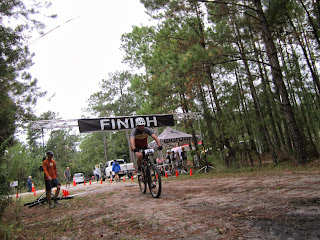 He seemed pretty proud of me, and I guess I was too.  I only figured I’d get six laps in six hours, even though I secretly had hoped for eight.  At the halfway point I was on pace for eight, but it just wasn’t gonna happen.  Lunchbox still said I did well, and told me to look tired so he could take another picture. 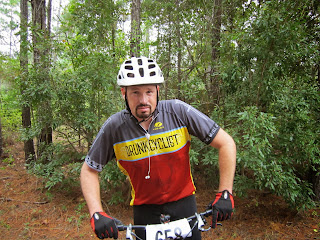 Nearly sixty miles in six hours wore me out, but I had so much fun.  Coming back from a shoulder injury I sustained just eight weeks prior meant that I wasn’t in peak shape or anything but I still felt pretty good out there.   I ended up sixth, which was enough out of last place to make me happy.  Now that I think about it though, last place would’ve been okay too.

I won against myself.  I even took home some swamp sand as a prize. 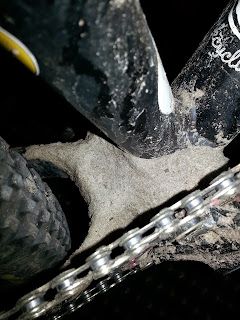