I don't do that shit. Instead, I just ride for fun. I know I can ride six hours this weekend, so there's no need to ride that long just for practice. Needing a bit of a break from beating myself up on the trail, I took a leisurely urban ride after work. We have many miles of greenways around here, so I took the liberty of exploring them. 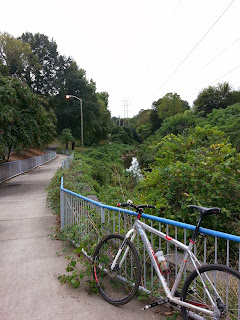 The temps have cooled a little bit around here which means that more people are getting outside for exercise. I didn't see a whole lot of people on bikes, but there were plenty of runners. We didn't get in each others way at all. In fact, it was nice to be out and see everyone enjoying the outdoors.

I pushed hard up hills, but other than that I just spun along and enjoyed being on my bike. I only took two pictures, so here's the second one. 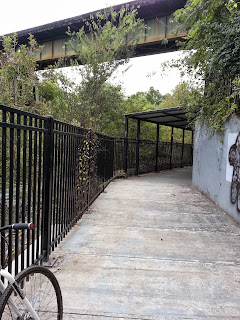 When I got home it was time for the obligatory post-ride beer. I glanced at the TV for a bit until the commercials came on. I always turn away to keep those pesky corporations from trying to sell me shit, but one commercial caught my attention. It was the trailer for the new Jackass movie, Bad Grandpa.

I'm fan of the Jackass stuff, but I haven't been to a theater in years. I usually wait until stuff comes out on video before I watch it because I can't stand crowds or people talking during movies. I watched the trailer anyway, because some of that movie was filmed right here in Charlotte.

Also, my friend and neighbor Vic The Chili Man had a spot in the film, and I was hoping some of his scene might make it to the trailer. Out of the ones I'd seen so far, that wasn't the case. This one however, was different. I spotted him, and luckily I was able to pause my DVR to get a snapshot. 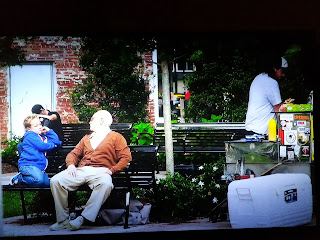 If you look closely, you'll even see a B-43 sticker on his cart.

It's the old logo of course, since I haven't gotten with D-Wayne to make any stickers with the new logo.

That's kinda cool I guess. It was neat seeing my neighbor in it. I'm sure I'll make an exception to my “I don't go to the theater” policy to see that movie (just for The Chili Man of course.)

I found a trailer online, but it's not the one I saw on TV.

It looks like it will be pretty damn funny.

Where was I?  Finished I think.