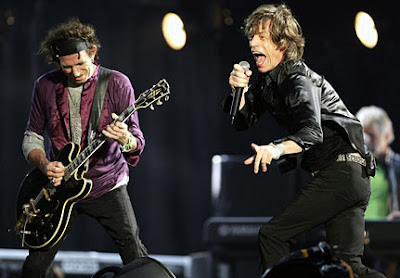 But unlike these guys I don’t have one foot in the grave. However, after one lap at San Lee Park on Sunday and one more to go, I sure felt like it. I hit the singletrack on my final lap, and I decided to take it up a notch. Just before the end of that first lap though, I had dropped back into third place. First and second place were still within sight, so I still had a chance to catch and overtake them. I settled into a good pace, and made up my mind to take a few more chances on this go ‘round.


I was still slipping and sliding everywhere. The trail had gotten a little drier since the rain stopped, but there were some spots on the trail that will probably take weeks to recover from the wet weather. I thought about taking it easy to guarantee a safe finish, but seeing the two guys in front of me made me forget about all that horseshit. I pushed and pushed, tackling the very technical trail with ease, especially the climbs. My legs were feeling good, so I knew I could get up there and take the lead. All of a sudden though, the trail started getting the better of me.


I slid off the trail a bunch of times on the downhill stuff, and got intimately acquainted with several trees in the process. The climbs weren’t too bad, even though there were a shitload of rocks. The Dirty Party Cycle (who got in a lap before the race started), said that the trail looked like a river bed, minus the water. The lines through the rocks were few and far between, but I managed to find them. With all the switchbacks, I could see that the two guys ahead of me were having trouble navigating the rock stuff. It would only be a matter of time until I caught up, or so I thought.


With about four miles to go, I decided to speed it up. I had been riding with a guy from another class the whole time, and we were helping each other keep a good pace. I was leading him at this point, when all of a sudden I slipped on a sloppy berm and headed straight for a tree. I put my hand out in front to catch myself, and basically punched the poor defenseless tree with my left hand. I thought I had broken it, and it immediately started to swell and hurt like crazy. I hopped back on my bike and caught up to my riding partner, and he said he was glad to have me back.


I could barely hold onto the handlebars with my left hand, especially on the climbs. Shit. The technical climbing was the only way I could catch those two guys, and I was suffering. First place was no longer close by, but I could see number two just ahead of me. On the last climb out, I ignored the pain as best I could and tried to catch him. When we reached the final descent, I let it all hang out. Lunchbox was there to catch the action. 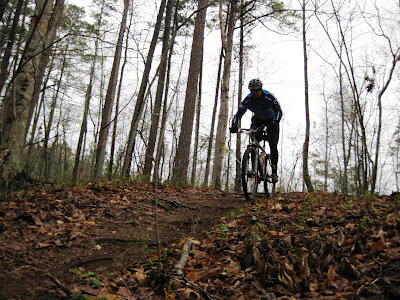 One more climb up that paved hill and I crossed the finish line. I wasn’t too far off second place, but at least I got on the podium this time. It was a tough course, and I earned that shit for sure. I was freezing by the time I finished, so I went back down the hill to my truck and changed into some warm, dry clothes. Then, I went back to pick up my loot. 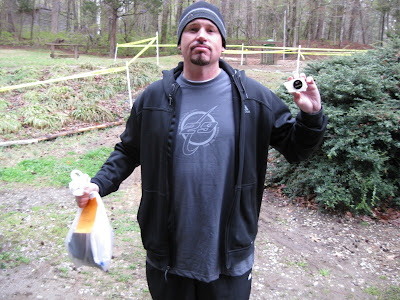 If you look closely, you can see my little trophy. In case you couldn’t keep your eyes off of my fancy new Bike29 t-shirt though, here is a close up of my prize: 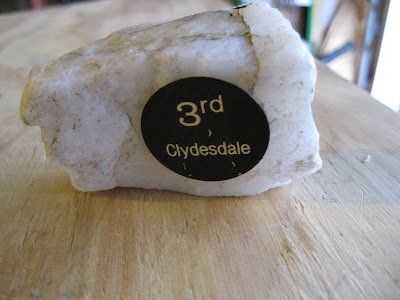 Yeah, I know it looks like a rock. In fact, it is a rock. Pretty clever, I thought. Actually, I found it quite ironic that my prize for suffering through a shitload of rocks for twenty miles was a rock. I was very happy to have it nonetheless, especially since it means that I reached my goal of getting on the podium at least once this season.


I got quite a few other goodies in my prize bag too, so don’t think I’m complaining. I really enjoyed that trail, even though it was super tough (and cold, and wet, and kicked my ass.) The folks out there in Sanford put on a good race, and I would definitely go back and do it again. I was happy that I pushed myself through such a tough race. The fact that I got to ride a new, highly technical trail in wet conditions made the whole day worth it. My hand still hurts a little, but it’s not broken (at least I’m pretty sure it isn’t.) I should be just fine to ride another day. I love suffering, can’t you tell?

You need to strap your trophy on your helmet for "training weight"!!!

Badass job down there, dude! At least you had the balls to show up in the sloppy wet...I was flopped out on the couch watching Westerns. Like a slacker.