ut I didn’t get in on the action.  The River’s Edge Mountain Bike Marathon at the Uwharrie National was this past Saturday, and I opted to skip the “racing’ and help out instead.

It all started with bike transporting. 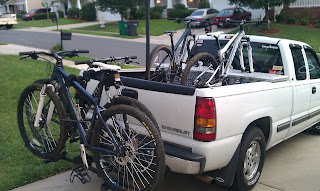 Since I was going out there to help, I assisted the race promoter with acquiring some bikes for a corporate team.  I picked them up from a local shop a few days before, and delivered them to the race to be used and abused.

I even got to help set them up for the racers. 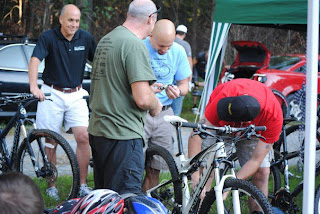 The race benefited the Alpha 1 Village Foundation, which Ben Hund started.  He’s a great guy, so when I found out that I was helping folks that he knew; it made me feel all warm and fuzzy.

And you probably thought I just went there to stalk Dicky. 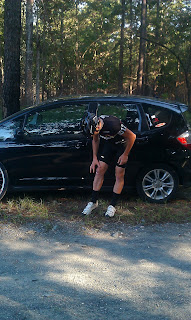 While the racers got ready to roll, I shot the shit with all my cycling people.  It was a good crowd, and it would turn out to be a beautiful day. 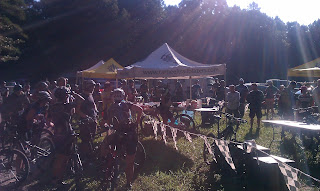 When they took off, I started with my volunteer duties.  First was to assist the racers with finding the entrance to the singletrack. 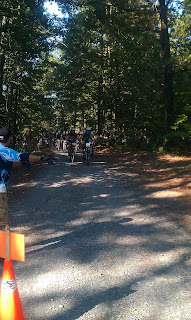 When they were off, I eventually made my way out on the trail.  I brought my single speed, and the plan was to ride the course and stop quite a bit to help the racers out there.  I took photos here and there, but mostly I provided encouragement.

Well, maybe I was stalking Dicky. 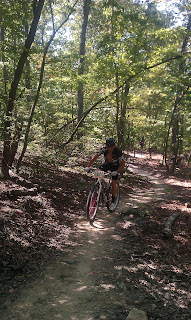 I camped out in various locations on the trail while I did my laps, and didn’t run into too many issues.  I stopped to talk with some other course marshals at one point, and we all agreed that the event was going quite well.  I bid those guys farewell and continued on my way (they were riding in the other direction.)  I made it up one of the longer climbs, and all of a sudden one of the other marshals chased me down and said that there was someone down on the trail.  He suggested that I should check it out.  You know, since I’m a Bike Patroller and all.

I made my way back down the hill to the downed rider, and I discovered that I knew him.  It was the MadSS, and he was not doing well at all.  It seems that he hadn’t recovered from that big ‘ol race in Leadville he just did, and he was overheated.  We did our best to cool him down, and eventually we started the long journey out of the trail.  His day was done, but now the goal was to get him outta there safely.

It took us a little while, but we made it.  I’m always glad to help a fellow rider out in the woods, and getting a chance to take care of someone I know makes it even better.  He will be fine, but that day a finish just wasn’t in the cards.  He was doing quite well up until then too.

I spent the rest of the time patching up riders with scrapes, cuts, and the like, and eventually everyone finished the race.  We hung out and enjoyed food on the grill, and lots of beer.  All the joys of racing, without the effort I guess.

At least I got a chance to pedal around in the woods on my single speed for a while.

Maybe I should’ve ridden that bike in the last Southern Classic race.  One gear would’ve been tough at , but at least the frame wasn’t broken.

Although I had originally planned to race the 50 mile event, I’m glad I got to lend a hand out there instead.  I do enjoy pushing myself on those longer races, but I think I enjoy volunteering just as much.

Any time spent on the bike is good, right?