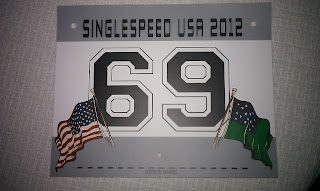 After crossing the finish line for Single Speed USA, I was spent (remember my interview?)

The fun didn’t stop there though.  With no water to drink (and not wanting to climb down into the mountain stream for fear of not getting out), I went right back to beer.  I did my best to help finish off the kegs with Thom, Dejay, Paul, and George. 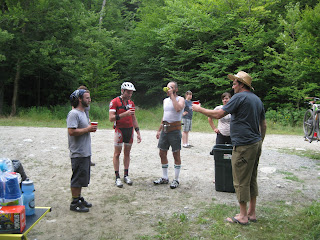 And watching Thom get his ass blown off by firecrackers… 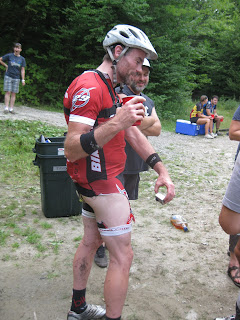 And the subsequent “brawl” between Thom and Dejay… 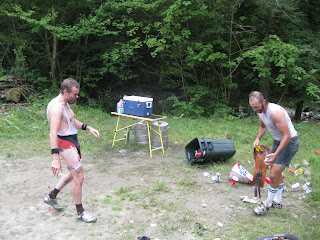 After that I had to ride all the way across town to get back to my truck at the start, putting my total mileage for the day over forty.  I had the option of riding my bike to the start, and after passing by my hotel on the way I knew I had made a mistake.

After what seemed like forever, I made it.  I drank about a gallon of water, got some food, and drove back to my room to clean myself up.  It was time to hit the afterparty, where the Black Owls were playing.

Dough and George seemed to be enjoying the show… 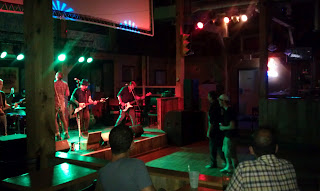 Until George started busting out his fancy dance moves on Thom. 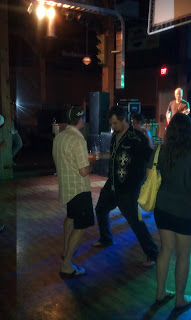 It was a good way to wind down.  I had a few beers (including some with Eddie and Namrita), and cut out of there to get some sleep.  The next morning I had plans to get out and ride, but I was pretty much worthless.

Instead I did a little sightseeing… 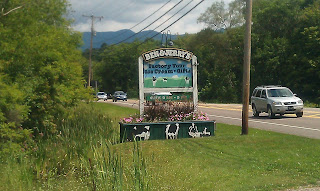 And found some of ’s finest cuisine: 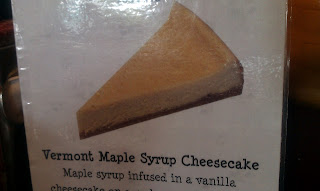 Later that evening, we had another get together, and this time it was pretty tame.  More beer (including the leftovers form the keg), and Dejay even cooked us some burgers.  Before we ate though, George showed off his awesome track standing skills. 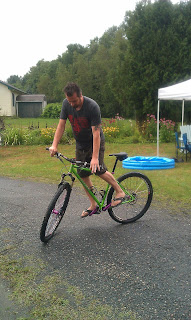 And we hung out until the sun went down (and beyond.) 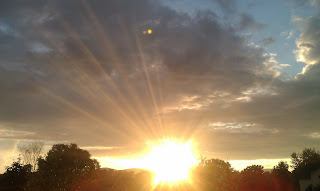 Since Dicky never showed up, the kiddie pool we setup for him became a place to discard the empty beer cans. 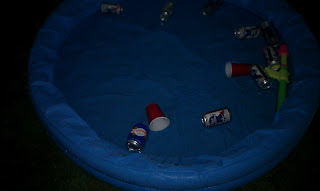 The next morning I had to hit the road, and I was sad to leave .  It was a great “race”, drank some good (and not so good) beer, ate great food, and I met a lot of cool people.  Well, since all the cool kids ride single speeds, I guess that was easy to do.  I really appreciate the hospitality that George, Mandy, and the rest of the folks showed me while I was there.  I brought home a lot of great memories for sure.

But, I brought home a lot more than memories… 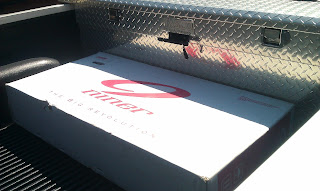 Yeah, I’ll get into that another day.

Before I forget, there is a bike festival this weekend.  Southern Spokes, is coming up quick.  I’ve been so busy, that I actually forgot to mention it.  It will be held this weekend at Lake Norman State Park, and will start Friday night with an open house at First Flight Bikes in nearby Statesville.  Saturday will be all about riding bikes, and there will be a movie and even camping.  Today is the last day to register, so head over to the website to get your name on the list.

I’ll be there, and maybe I’ll tell you some of the “behind the scenes” stuff from SSUSA that I didn’t talk about on here.