Change Is On The Way


With all the catching up I had to do, I was surprised this morning that I felt like I didn’t really have shit going on  There’s always something I can talk about, but finding the motivation to do so is difficult at times.

I act like I’m getting paid to do this shit.

So yeah, it looks like I’ll be switching things up a bit around here.  Not necessarily on the blog, but in my bike world.  I guess they are one in the same sometimes though.  The blog will have a new look again shortly, but nothing too major.  My man D-Wayne (who is a pretty awesome designer by the way) has been working on a new blog header for me, and has also totally redesigned my pathetic attempt at the B-43 logo.  Even though he’s working for beer, he’s done a really good job.  If I wanted a totally professional look though, I probably should’ve thrown in a few donuts.

Anyway, there are a few bike changes around here.  I did get something new, but I’m not at liberty to talk about it just yet.  When my “cross country season” is over (this weekend), I’ll spill the beans.

Until then, here’s a little teaser. 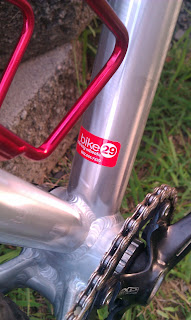 If you know me in real life and you’ve seen me riding around here lately, then you know exactly what it is.  Do me a favor though and keep it quiet so you don’t spoil it for the rest of the millions of people that come here every day.  I’ll get to it in due time.

The “secret bike” already has a new accessory though.  I just picked it up da udda day here locally. 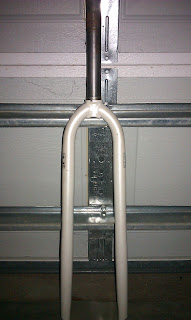 Yes, that is a rigid fork.  I spoke to (well, texted) Dicky a while back inquiring about a cheap and easy way to try the whole rigid fork thing.  I rode a bike with a rigid fork back when we went to the Southeast Bike Expo, but I didn’t really enjoy it.  The bike was too small for me and had other issues, so I didn’t really get a chance to properly evaluate the lack of suspension.  I felt like I should give it a fair shake with one of my own bikes, but I didn’t want to spend a ton of money doing something I might not like.

He gave me a good option, but when the chance to buy something local popped up I took advantage.  It’s nowhere near the best rigid fork around, but it should do the job.  I haven’t installed it yet, but it will happen really soon I’m sure.  There will be photos and a review no doubt.

That should give me plenty to talk about for a while.

This weekend is another busy one.  Tomorrow I’m heading over to the for the River’s Edge Mountain Bike Marathon.  I had originally planned to race the 50 mile event on my favorite “local” trail, but I’ve changed my mind.  Instead, I’ll be volunteering as a course marshal, getting to ride my bike around all day at a leisurely pace and heckle, I mean help, the racers.  I did the same thing last year and had a good time.

Sure, I really wanted to “race” my single speed out there, but I have to save my legs for something else…

The 2012 Southern Classic Series finale is Sunday at in .  I wanted to race the 50 miler Saturday and then do this one to go out in a blaze of glory, but I have too much on the line.  I’m in second place overall, and if I don’t have the legs to have a decent finish on Sunday I could piss it all away.  Normally I wouldn’t mind that so much, but I’ve invested a lot of time in this series over the last few months and I’d like to have something to show for it.  My season hasn’t been stellar, and I actually feel like I’m getting slower.  I will be sad to see it end, but happy at the same time.

I can’t wait to get back to “regular” riding.

See y’all Monday, and there will be some sort of race report.  Hopefully with a podium photo or two.

YES! Rigid. I hope you love it. I do. On the rare occasion I ride my hardtail that has a sus fork I feel so out of control on the bike. Like the front end goes all over the place. Rigid forks are exact, precise, and a hella lotta fun. Enjoy and keep a loose-ish grip ;-)

I may or may not have gotten the idea from you.