Six Hours Of What?

With no more Sunday races, I thought I would have lots of free time for a while.  It looks like this weekend is filling up fast though.  After chatting with D-Wayne da udda night, we put together a plan for…

Since my post about our local gem Poplar Tent closing soon, it seems like mountain bikers all over are up arms.  While we can’t do anything about the closing of that wonderful trail, we can get together to send it off in style.  D-Wayne came up with the idea to invite a shitload of folks from all over to ride there, and basically making it a big ol’ shindig complete with riding, drinking, and shit talking.  The festivities will start at 10:00 a.m. Sunday (or whenever everyone shows up), and we will ride until we get bored, hurt, or extremely tired.  Pretty much anyone is invited, so you should come out too.

While we still have another month to ride it before it goes away forever, we’d like to go ahead and get this party started right.  I plan to ride there as much as possible over the next month, but having a shitload of people show up to ride it this weekend would make losing it a little bit easier.  I don’t plan on having an easy ride though, because I’m bringing my new bike. 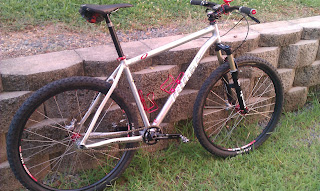 I have jumped ship over to Niner for my single speed adventures now, and I’m so glad I did.  This bike rides so much better than anything I’ve been on, and I just can’t seem to put it down.  It wasn’t easy to get last year’s model in my size, so I have to throw out some thank yous and such.

First, I called up George to see if there was a chance I could find a last year’s One9 in the Raw variety.  There seemed to be plenty of them available in Kermit Green, but I don’t swing that way.  He worked with the local rep and they located a Raw one in that was tucked away inside some top secret underground bunker out in .  I guess you figured out by now that I picked it up when I went to last month, but I’ve somehow managed to keep it quiet until now (unless you’re local, because a lot of the locals have seen it already.)

Anyway, I built it up the day after I got back, and I’ve been riding the shit outta it ever since.  I don’t have a name for it yet, but I have an idea.  It will have something to do with my favorite movie, and that’s all I will say right now.

Well, I’ll give you one more hint:

"It’s fast, and it will make the Kessel Run in less than twelve parsecs.  She’s fast enough for you old man."

So, big thanks to Bike29 and Niner for hooking me up with a real single speed (and biggest thanks to George for putting up with my needy ass.)  Y’all have no idea how much I dig this thing.

With all that outta the way, I have to get to the most important event of the day.  My son, Lunchbox, has a birthday today.  He’s made it sixteen years on this planet.  I’m shocked at how fast the time goes.  It seems like just yesterday that he was out on the trail with me on his sixteen inch wheeled bike pedaling his ass off to keep up with us grown ups.  I’m proud of the man he is becoming, even though he’s making me feel really old right now. 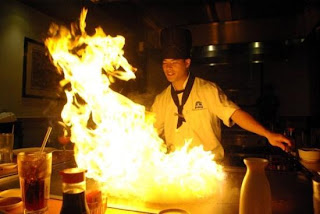 Tomorrow morning I’m meeting up with the Dirty Party Cycle at one of our local trails to ride the shit outta my new bike.  We plan on doing multiple laps at the , drink multiple beers, and rest up for the Poplar Tent fiasco the very next day.


Oh yeah, Monday is a holiday.  That means I won't be here until next Tuesday.