I Have A Few Things Going On

This weekend is shaping up to be a busy one.  After taking a long vacation and finally getting back to normal, shit is gonna get crazy.

The Southern Spokes Bicycle Festival starts tonight, and continues throughout the weekend.  Tonight I’ll be at First Flight Bikes for the open house, and nosing around in the Museum of Mountain Bike Art and Technology.  Since I only live a short drive away, I’ll forgo the camping at Lake Norman State Park to sleep in my own bed for the night.  I’ll return the next morning to the state park for a day of socializing, bike riding, and other buffoonery.  While there are also events scheduled there for Sunday, I have something else on the calendar. 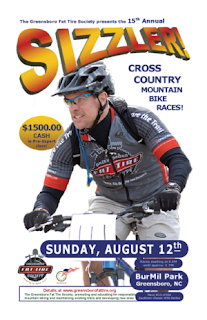 The Southern Classic Series series is back, and this is the second to the last race.  The Sizzler in Greensboro should be fun, but I’m having a hard time getting motivated.  Last year I broke my chain right at the start, and posted my first-ever DNF in the series.  I don’t remember much of the course, except that it was pretty slick and had a dangerous (when wet) bridge.  I busted my ass on that bridge when the chain broke, and that probably ruined my experience.

I’m giving it a go, mostly because I’ve invested so much in the series so far.  I have a chance to medal in the overall standings when it’s all said and done, but I’m not sure if I can hold on.  I’m not feeling super serious, especially since I just came back from a really fun “race” in .

Do you think that they will have aid stations stocked with liquor?

After the race, Lunchbox (yes, he’s back in town finally) and I are heading up to to attend training camp for the local football team and to visit our family.  We’re supposed to return in the middle of next week, so I should resume blogging duties around Thursday or so.

There’s a chance we may have to stay up there a little longer due to a family obligation though.

I’ll be back eventually, and there should be a race report when I return.