At the halfway point, there was plenty of this: 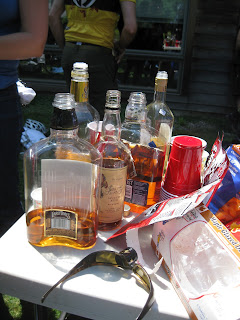 The “aid station” was stocked with all sorts of booze, including beer, whiskey, and tequila (courtesy of Drunk Cyclist.)  Most people drank a lot.  In fact, we drank so much that it was hard to tell that we were “racing.” 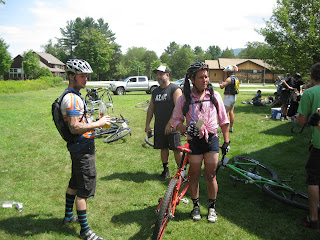 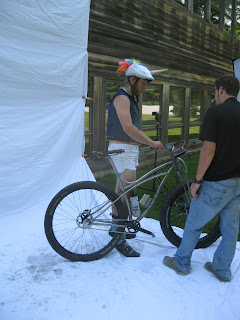 Even Sandie the school girl got in on the action, discussing the finer points of 40oz drinking with Wonder Wo-Man: 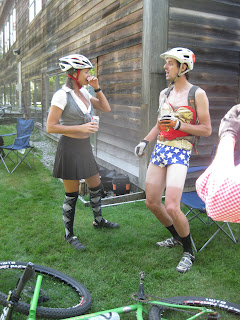 Mandy was there, and asked if I was having fun.  I was riding my bike and drinking, so I answered in the affirmative.  As much as we wanted to though, we couldn’t stay there all day.

A group of us took off from the rest stop…

Every single one of us drunk as shit.

We crossed the road and hit some more trails, and they went up, up, up again.  All of us were suffering, but at least the alcohol numbed the pain a little bit.  When we got to the top, there was a fun downhill section.  I flew through it, taking the worst lines possible.  I was full of confidence because I was pretty much wasted, and luckily I didn’t bust my ass.  I think our whole group rode better because of that rest stop.

We exited the singletrack into a clearing, with no course markings in sight.  We were lost…again.  Daisy Dukes Guy and Wonder Wo-Man did their best to help figure out where we were. 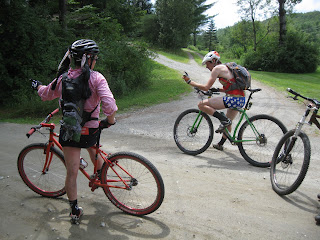 They took off down the hill, but the rest of us weren’t sure if that was the way to go.  We hung back and had another beer, and then we decided to back track.  We eventually rolled up on the course sweeper with a couple of other guys, and he directed us to the turn we missed.  We had a pretty good group of drunken idiots riding along trying to survive, and we rode like that for a while.

At one point when we stopped to regroup, I happened to look down and notice something on Sandie’s fork. 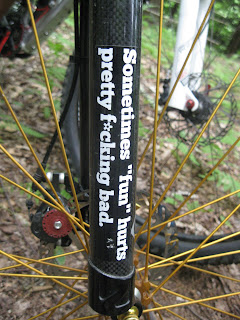 That pretty much summed it all up.

We kept going, having no idea how far we had to go.  I heard someone say we had twelve miles to go, and I wondered if I could make it.  As the alcohol wore off, the suffering increased.  I decided that I didn’t want to be out there anymore, so I picked up the pace and left everyone behind.  I was hurting, but at that point I had no choice.  I popped out of the trail and into a parking lot, and I thought that I was almost finished.  I was way wrong.  I crossed the road and headed up a steep climb, full of switchbacks that seemed to go on forever.  I eventually made it to the top. 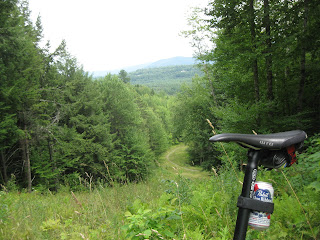 I forgot to mention that I grabbed a beer to go, and used my Awesome Strap to hold it in place.

After all that shit I still had a little more gravel road climbing.  I felt like it took forever, and there was no end in sight.  I started to think I was gonna die out there in the woods, and no one would ever find me.  Buzzards were circling overhead, wairing for me to fall over and take my last breath.

Just then, I hit a long section of really fast, swoopy downhill stuff.  It was fun as hell, but I kept wondering when the next climb would come.  I was tired, but I still had a smile on my face from all the fun stuff. 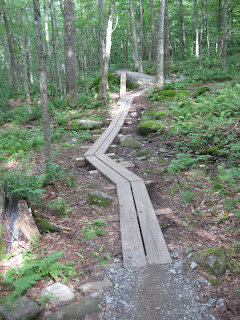 And just like that I heard a crowd of people cheering and I saw a bridge up ahead. 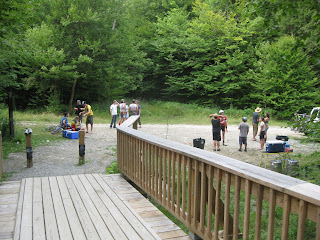 I had just finished the most horrible and most fun thing I’ve ever done.  Six hours in the saddle on one gear, well over thirty miserable miles, and a shitload of alcohol.  I really enjoyed Single Speed , and I’m glad I made the trip up there.  Big thanks to George and Mandy (and anyone else around there that helped) for hosting a kick ass bike event.

Maybe tomorrow I’ll get into the aftermath.

Email ThisBlogThis!Share to TwitterShare to FacebookShare to Pinterest
Labels: drinking, getting lost, SSUSA

lol. Solid write up. I agree, the riding hurt way more when the alcohol started to wear off. Such a fun fun day. Can't wait for SSUSA MN ;-)

Looks like the XXC sticker was very appropriate.
http://xxcmag.com/merch/xxc-sticker-packs

it was great to finally meet you in person, glad you made it up here and managed to survive SSUSA.