Even though my race was over a week ago, I still feel like I owe you some kind of report.  Besides, I kinda do this for me a little bit, just so I can remember what I’ve been doing.  So yeah, here goes (what I can remember anyway.)

We got to with plenty of time to get ready, and I actually felt pretty good.  It had rained a bunch the night before, so I knew the course would be slick like last year.  I planned ahead this time, and lowered my tire pressure a little to get some extra grip.  While I was waiting for my group to go out, I mentioned to the other guys in my class that I can’t seem to stop doing the same old shit at every race:  taking off too fast and burning out.  I swore that I wouldn’t do that this time.

We took off, and I was obviously full of shit. 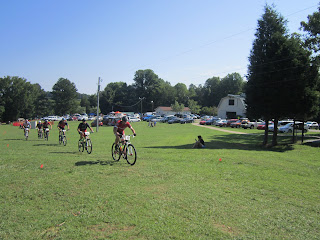 I didn’t mean to get out in front, and as a matter of fact I wasn’t really riding that hard.  At the top of the hill, decided to back off a bit to make sure I didn’t wear myself out.  I dropped back to second behind Todd (the current series leader), and we made our way towards the singletrack.  Before we got there though, Jack passed me (and nearly took me out by accident.)

We hit the first climb in the singletrack, and Jack slipped.  I used that opportunity to get back in front, and rode through to get back in second.  I stayed there for a while, but I knew I was pushing too hard.  I backed off again, and dropped back to third once more.  Sensing that I was letting up, another guy went by me.  I was okay with that, since we had three laps to do out there.  One more guy went by me, and then another.  I was sitting in fifth place, and trying my best to settle in. 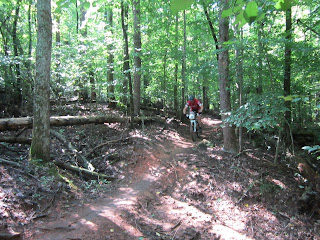 Even though I purposely let out some air in my tires, something didn’t feel right.  I looked down and noticed that my pressure was a lot lower on my rear tire than when I started, and I could feel my rim bottoming out on the roots.  I took it easy after that, and kept looking over my shoulder knowing I was gonna get passed again.  I never saw anyone, so I kept going as best I could.  My stomach hurt like hell for some reason too, but I was able to ride through the pain.  I passed the start finish line, and headed out for lap number two.

I was starting to feel a little better, and settled into a good pace.  I was by myself still, and I was happy that I wasn’t in last place.  The trail had dried out considerably, but I didn’t want to take the time to stop and put more air in my tires.  I just kept going with what I had and made the best of it.  As I got close to the end of the lap, I saw Lunchbox hiding in the bushes to get another photo. 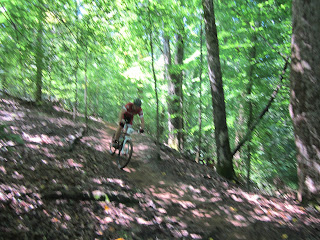 I’m not sure why it’s blurry.  Maybe I startled him or something.

On to lap three, and I was getting bored.  Maybe it’s because I’ve been doing this series for so long, but I kinda get tired of riding in circles for multiple laps.  Honestly, I just wanted this shit to be over.  My rear tire wasn’t losing anymore air, but the pressure was still too damn low.  I had a good lap though, and no one else caught me.  Well, that’s not totally accurate.  The pro/expert classes took off minutes after I passed through the start/finish line, and eventually those super fast guys caught me.  It wasn’t without a fight though, because I rode pretty hard for a while to keep them at bay.

My little ride with those guys made that lap go by much faster, and I was happy for it.  I was tired as hell, but my legs felt good.  Making my final approach to the start finish line, I stepped it up.  The last section before the end was on a greenway though, and I nearly collided with a family on bikes that didn’t see me (or the rest of the people out there racing.)  After narrowly avoiding a crash, I sprinted towards the finish line.

Once again my kid was there with the camera. 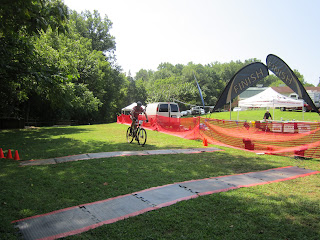 I ended up finishing in fifth place, which I guess was okay.  When all the points were tallied, I remained in second overall in the series.  I only have a lead of thirteen points over third place though, so the next (and final) race in the series could be interesting.

So yeah, I still haven’t learned shit.  You would think that after all these years of racing I would figure out how to keep myself from burning out.  I’m not that worried about it though, because I still manage to end up okay.  I may not train for races, but when I’m out there I still give it my all.

I guess that’s all I can ask for.