And Then We Went Up

When the rest of the group bailed on the ride for beer (sounded good to me), I made sure that TomTom was good with the idea of us continuing on.  He’s pretty much down for anything, but I still felt like I was dragging him out for a death march.  Reassured that he wanted to keep going, we rode down the greasy trail for a while.  We crossed a creek and came to a clearing, where we checked the map once more to make sure we were going the right way.

And then we saw the start of hike a bike switchback hell.

Up we went.  I think we counted seventeen of those tight, steep, uphill turns, most of which were too treacherous to ride.  We rode a little here and there, but walked a lot of it.  We were moving along though, and even though it rained on us off and on we were having fun.  I mean, getting near the top was way worth it. 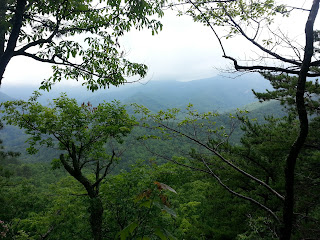 Once we thought we reached the top (according to the cue sheet), there was an intersection where we were supposed to turn right (the cue sheet said, “Heartbreak, downhill.")  We did, but as we went along the trail started getting really narrow, kinda like no one had been on it in years.  Couple that with all the no trespassing/private property signs we decided that we should go back to that intersection.

We turned around, climbed up a little more and came to another intersection.  This one seemed more like it, with the trail slightly to the right pointing downward.  We hit it (in the pouring rain again) and flew down the rocky, slippery goodness.  I kept the camera stuffed safely inside my backpack so it wouldn’t get wet, and we took our chances at speed down Heartbreak.

It was fun as hell, and the only issues were a few of the slippery, tight switchbacks.  After what seemed like forever we exited the trail onto a road, where once again we checked the map to make sure we were heading in the right direction.  It started to rain again, so TomTom and I held the waterproof map up for shelter and tried to decipher the soggy cue sheet.  We quickly dismissed the idea of taking a photo there, and hopped back on our bikes.

The section was , which started out mighty fun in the rain.  We rode it for a while mostly downhill, until we came to a creek.  With such an obvious landmark we decided to check the map again to be sure of our route, plus I wanted to stare at the pretty creek.

Nature.  I likes it.

The map was all we had at that point, since the cue sheet fell victim to the elements. 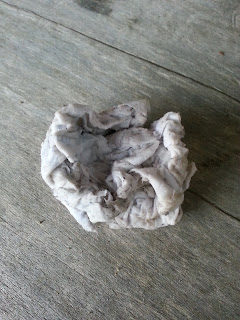 Remember, we had no idea if we were going the right way or not, so I didn’t want to go very far and end up even loster (yeah, I said “loster.”)  Since it was raining most of the time I didn’t see any signs of wildlife, save for the steaming pile of bear shit that I almost ran over on one of the fast downhill sections.  I was disappoint.  I likes wildlife too.

After the creek we climbed for a while, and it wasn’t as bad as the stuff we rode up earlier in the day.  However, after being out there so long it did wear us out a little.  We kept waiting for the climbing to end, but we rode hard to get that shit over with.  It worked for the most part.  We stopped one more time at a gate to check the map (and eat a little bit), and realized that we still weren’t sure if we were on the right path.  The road started heading downhill again, so we decided that we would at least enjoy it, even if it isn’t where we were supposed to be.

Since it was doubletrack (fire road), TomTom and I rode side by side, hauling ass down the mountain.  I tucked down low so I could reach 88 miles per hour to get back to 1985, but the fastest I got was about 25.  After riding downhill for miles and miles, I rounded a corner and almost hit a lady walking with a little kid in the middle of the road.

Holy shit.  We were near civilization.

Just then, we saw a parking lot with a familiar vehicle.  Little Miss Sunshine, Allison, and Danielle were there waiting for us to make sure we were safe.  They ran out of the car yelling something, and carrying these strange boxes. 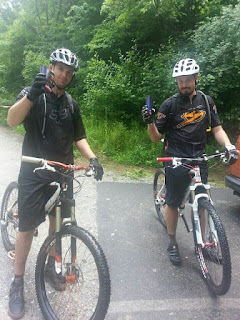 I realized that they were saying “Fry hand up.”

Very clever.  Now, where the hell was the beer hand up?

We still had a ways to go to get back to where we started but our time in the wilderness was over.  They offered us a ride, but we didn’t come that far to take the easy way out.  Before we took the road back to town, I stopped for a photo op with my bike next to . 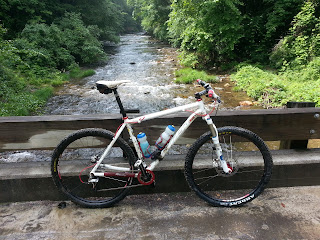 What an awesome day.  TomTom and I were the only ones that did the whole loop that day (although we didn't ride the day before), and I’m so glad we did.  Spending a day in the mountains on my bike (and in the rain) was the perfect way to spend a Sunday.

You bet your ass I’m going back soon.
Posted by TheMutt at 8:25 AM