I Wasn’t Sure I’d Survive

Especially with this guy hanging out in the pit area. 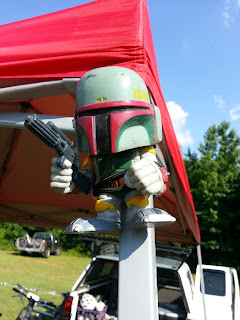 Yes folks, the Tree Shaker would be yet another chance for me to test my mental and physical limits, and I was ready I guess.  I was out there to push myself, but once again my kid was there to have fun. 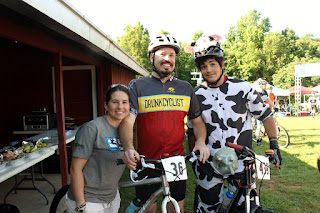 Photo credit from here on out:  The Trail Mayor

Lunchbox was doing his first endurance race (the four hour variety), and he didn’t seem one bit nervous.  His plan was to ride as much as he could for four hours in a cow suit.  That was simple enough.  We lined up for the pre-race announcements, and I started thinking about my strategy. 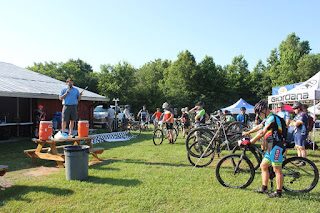 It was “wipe your ass with a snow cone” hot already, and when we rolled to the start line back down the road I was at peace and ready to have a good time. 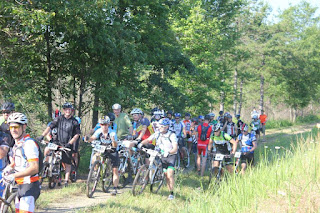 Since it was getting warm, I was on a single speed, and I was wearing a heart rate monitor, I came up with the most brilliant of strategies…

I would be a race car in the red.

When we took off, I really took off.  I spun my ass off on the gravel road, hoping to get into the single track early so I wouldn’t get caught up in the inevitable traffic jam.  I watched as my heart rate shot up to 98%, and stayed there.  I felt okay, so I figured that I should keep pushing it to see how long I could take it.  No matter how I’ve tried to conserve my energy in the past, I still usually end up feeling shitty.  I figured that this time I would earn that shitty feeling.

My kid was working it too, although he had a few more gears than I did. 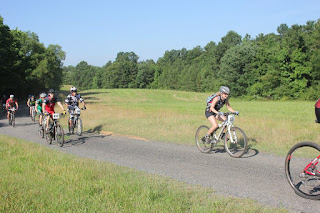 I ran that whole lap pretty fast, and stayed what I thought was up near the front.  The two single speeders that I knew for sure were trying to catch me (Good Guy Greg and Big Crom) were nowhere to be found.  I used that as motivation and kept my wheels a’ spinnin’.

Despite the fact that I was red-lining, I felt okay.  When I got to the very last singletrack climb on the course before the exit, I stood up to mash my way through and slipped on a root.  I slammed down hard on my right side, knocking my wind out for a second.  I got back on, walked a few feet, hopped back on my bike, and rode my ass off towards the start/finish line.

I was superfly TNT.

I had already made the decision not to stop in the pit, since I had only consumed one bottle during that lap.  I threw my empty bottle to TomTom (who had just finished lap one for his duo team) and asked him to fill it for me while I was gone.  I took off, and tried my best to put a gap on everyone else.

I didn’t know if it would work, but I didn’t give a shit.  I was prepared to go out in a blaze of glory.  It’s more fun that way, you know.

Lap two was a little more of the same, although there was a lot less traffic this time.  I found myself consciously trying to control my heart rate on the flatter sections, and I didn’t worry too much about how high it got on the climbs.  I knew I would get tired eventually, so I used it while I had it.  It was a great lap, and I turned what was probably my fastest lap time of the day.  When I came around to the pit area I grabbed my freshly refilled bottle (thanks again, TomTom) and rolled off as fast as I could.

I felt like I was gonna die, but as least I was moving fast.  Let's see if I could keep it up for lap three.

Oh, would you look at the time?  I’d better get going.

I’ll finish this up tomorrow, or tell you how it finished me.
Posted by TheMutt at 8:23 AM