But the third time isn’t a charm…yet.

Continuing my quest to see if I want to keep a geared bike, I decided to finally try a local trail that for some reason I hadn’t ridden yet.  I headed over to the Rocky River Trail (which is really close to my house by the way) for some solo fun.  TK-421 was the bike of choice again, which would make this the third consecutive ride on gears for me.  With a goal of five rides on the geared bike, this particular ride should tell me something. At least I figured that anyway.

I was just out for fun. 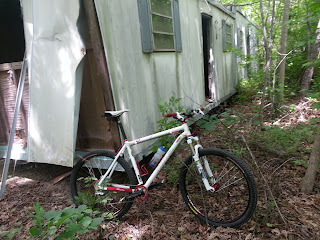 This is a huge piece of land where you can find all kinds of unique “items” (like the photo above), but that’s not what I liked about it most.  Being a pretty new trail to the area (and on private property), I found the parking lot quite empty and the trail even less populated.  I had the entire ten plus miles all to myself, so that meant that I could ride as fast as I wanted, or even stop whenever I felt like it.

I stopped when I saw neat shit. 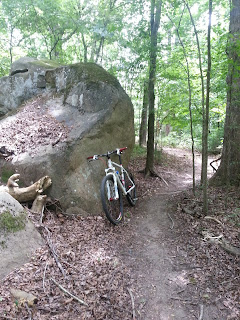 It was fast and flowy in spots, and rocky, rooty, and full of climbs in others.  It reminded me a lot of the trail we’re building near my house, and I enjoyed it immensely.  Even though I was out there all by myself, I still couldn’t escape the ghost of Dicky. 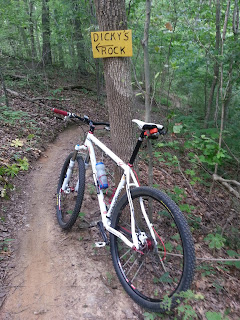 I seem to remember him talking about working out there, and I finally got to see what he did. 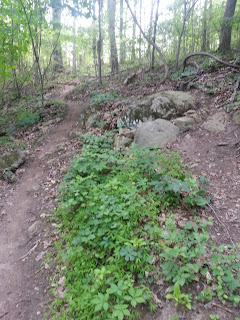 The rock on the right side of the photo is his, and it’s pretty damn fun.  Right after that is a tight switchback turn and just like the rest of the trail, it kept me on my toes.  I was told that it is a “busy” trail.  I agree.

There are a couple of climbs that I heard about, and in my mind I built them up to be impossible.  I knew I was riding a geared bike so I would have a little bit easier time, but that wans’t the case.  I was riding it like a single speed, pretty much staying in the equivalent of a 32X20.  One climb (called No Name) was tough, but I made it somehow.  I had also heard about another climb that was supposed to be tough as well, and when I got to it I prepared for the worst. 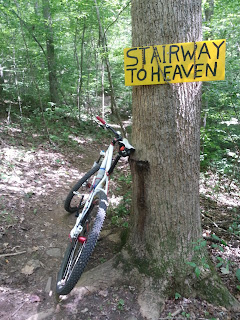 It was tough too, but I cleaned it just fine.  Riding a single speed all the time has definitely made me a better climber, but I wouldn’t go so far as to say any of it was easy.  I worked my ass off out there for pretty much the whole ride, and it was really fun.  Once again I enjoyed the suspension fork I had, but the gears seemed to confuse me.  I was never really good at shifting into the right gear in the first place, but riding more and more single speed it has gotten much worse.  I ‘m way more of a masher now, and I’m not ashamed of that.

So yeah, it was a fun trail, and I will definitely be there a lot more in the future.  In fact, it will probably be at the top of the list when I go ride.

Two more rides to go on gears, and most of you probably think you know what the decision will be.

Number four tonight.
Posted by TheMutt at 8:16 AM