Lap three of the Tree Shaker and I was still feeling pretty good.  I knew I couldn’t keep up a breakneck pace with my heart rate through the roof, but I was determined to keep going.  I didn’t want to back way off to let Big Crom and Good Guy Greg catch me, but I started feeling like it would happen anyway.  I made a conscious effort to keep my heart rate around 85% when I could, and use the flat stuff to recover.  It worked, until I got a big ol’ surprise.

After a couple of miles, Big Crom was suddenly right behind me.

BC:  “Man, I had to work hard to catch you!” Even though he wasn’t even breathing hard.

Me:  “I had to work hard to keep you away.”  As I tried not to let him hear me breathing hard.

We rode together for a while shooting the shit, and I was unknowingly revving up my pace to try to wear him out.  I realized that I wouldn’t make it past three laps if I kept it up though, so I told him to go on while I backed off a bit.  He passed me, and I resisted the urge to chase.  Then I knew it would only be a matter of time until Good Guy Greg did the same thing to me.

I was hurting, mostly from my lower back tightening up (and the crash earlier.)  My legs were okay, except for a couple of small cramps when I stood on steep climbs.  In spite of the pain, I tried to keep a good pace until I got to the pit area.  I was so happy to see the gravel road again. 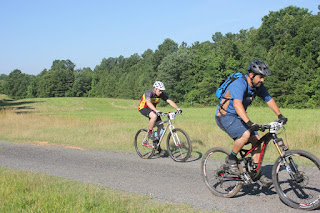 And I heard that my boy was hanging in there too. 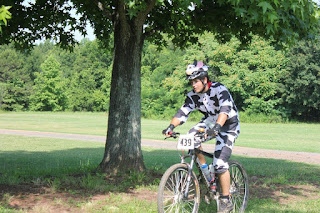 I hopped off my bike at my tent and immediately grabbed a couple of ibuprofen capsules to help with the back pain.  I ate a little bit, drank some, refilled my water bottles, and headed back out for lap four.  I was hurting, but I didn’t want to make the mistake of staying in the pit too long.  That’s bitten me in the ass before, and I wanted to make sure I kept moving so my legs wouldn’t start with the full on cramps.

I bombed the downhill stuff, and on the first climb I started to get a little relief from the pain.  I was moving a little slower, but it was still a pretty good pace.  I made sure to keep drinking fluids when I could, but that was pretty difficult.  Riding with one hand on roots with a rigid fork is a recipe for disaster.  I ran off the trail a couple of times because of it.

Lap four was over before I knew it, mostly because I was in a daze.  I returned to the pit area and refilled bottles, rolling out again without hardly even stopping.  I had completed four laps in four hours, which was a much better pace (so far) than last year.  And I found out later that Lunchbox completed three laps (a personal best for him) in a little over four hours.  That was good enough to get him 16th out of 21 riders, all of whom were far superior riders (and adults.)

I was proud, but I still had half of a race to go.  I was on autopilot at this point, and I really don’t remember much of the details.  I watched as the miles ticked away, and I found myself looking forward to the couple of fast, downhill spots so I could enjoy myself.  I was suffering a little bit, but at least I was moving.  Besides, I knew Good Guy Greg was still trying to catch me.

Once again I rolled through the pit area without stopping.

Lap six was weird.  I was cramping a little bit, but my heart rate was finally under control.  Every once in a while though, I would look down at the display and it would read “0.”

In an effort to give myself a little boost, I drank a bottle of iced coffee.  When I saw that it had 200 calories, I decided to drink one more.  I didn’t realize that it contained milk (I wasn’t thinking clearly at this point), and that shit was sloshing around in my stomach like the ocean in a hurricane.  The caffeine helped a little, but I was starting to feel sick.  About halfway through the lap I was spacing out, and I got really cold.

My first though was, “My body is shutting down.”  I didn’t want that to happen, and I sure as hell wasn’t gonna quit.  I really wanted to get off of my bike, sit down on the side of the trail, and take a nap.  At that point I didn’t give a shit where I was, and I especially didn’t care if I finished the race.  I even contemplated jumping in the creek a couple of times.

I made it back to the pit, grabbed some food, refilled my bottles, and grabbed a Pepsi to stuff in my jersey pocket (I should’ve grabbed a beer.)  I took off again, and felt much better.  Unfortunately, I wouldn’t have time to do another lap after that one so I at least tried to enjoy it.  The singletrack was fun, and the climbing wasn’t so bad anymore.  I think I had passed the point of exhaustion but my mind still wanted to keep going.  I was having fun I guess, even though I had no idea why.

I walked only two climbs, and actually did it in a hurry.  I resisted the urge to stop even when I dismounted, knowing that all I had to do was keep moving.  Nearly at the eighth hour, I rolled up on the gravel road and headed to the finish line.  I was happy to be there too, even though I had no idea how I did it.  I ended up with one more lap than I did last year, and I did it faster too.  If it matters, I was in fifth place, although that wasn’t too important.  I gave that race everything I had, and for once I didn’t feel like I didn’t work hard enough.

It’s the little victories, you know?

And I was really proud of my son too. 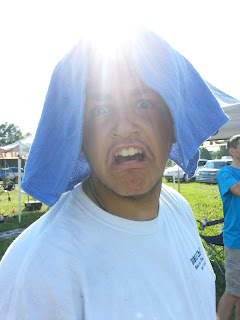 It was a good day to suffer.
Posted by TheMutt at 8:21 AM