The Mountains Are Calling

And I shall go.  I didn’t get out of town last weekend like I wanted to, so I’m making up for it this weekend.  There is a group ride happening up in them thar hills and I plan to be there.  There’s a pretty good group of us people heading up to ride some Pisgah goodness.

Well, it’s not “Pisgah Proper” like D-Wayne says, but it’s still in the .

I even have a map that says so: 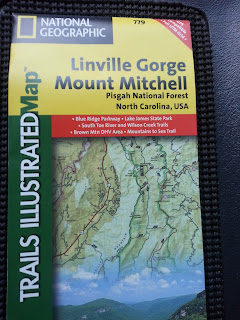 We’re hitting the town of to ride the famed Kitsuma trail and some other stuff in the area (Heartbreak Ridge, Star Gap, etc.)  The ride is actually a loop that’s used in the Jerdon Mountain Challenge which D-Wayne calls a “Baby ORAMM".  I’d have to agree with him there, because instead of 63 miles and 11,000 feet of climbing, this one is only 30 miles with 4,000 feet of climbing.

I guess so.  I mean, only one trip up to and down Kitsuma and skipping the climb up is about as “easy” as you can get out there.  The course is still pretty tough, but fun.  And I’m okay doing a “lesser” version of the big one. 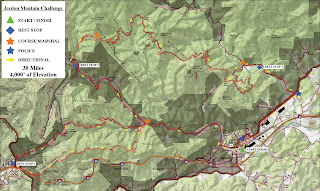 So if you haven’t figured it out by now, it looks like I’ll be “racing” in the hills next month (July 20th.)  I’m riding it on my single speed, because that will probably be the only kind of bike I’ll own by then.

And that’s why I got some of these from Endless Bikes: 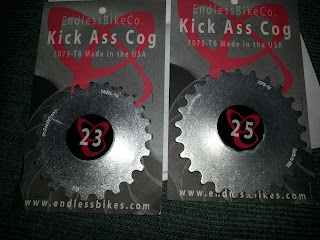 Yeah, I know they’re pie plates.  That’s what I need to carry my big ass up those climbs.  If Dicky is only four apples tall, then I’m the whole fucking apple cart.

Anyway, this weekend’s ride is sort of like a “training ride”, although I hate to call it that because I don’t like to do any kind of training.  It’s just a group of friends going to ride in the mountains, and we’ll have a good time while we’re out there suffering.  I won’t be suffering as much as normal though, because I’m bringing gears.

I know, I am disappoint too.  I haven’t reached my five ride quota on the geared bike yet, and I’m not going back to the single speed until I do.  Besides, I think I might like to have a squishy fjork out there, and I just don’t have time to swap out the fork on my SS.  I have other shit to do before we go.

If I don’t make a wrong turn, get eaten by a bear, or fall to my death somewhere out there then I’ll be back here next week with a report.

A geared, squishy report but a report nonetheless.  At least I’ll get ride number four out of the way.
Posted by TheMutt at 8:43 AM

I will be waiting for beer. Bring beer or I will throw sticks in ur spokes.

Do you know me? I always bring beer.