Before I talk the whole five rides thing, I probably should mention that we had a ride da udda night.  Every trail was pretty much unrideable due to recent wet weather (a recurring theme around here lately), so we scheduled an urban ride.  Instead of the usual ride down stairs and through parks thing, we rolled through a couple of neighborhoods like a pack of wild roadies. 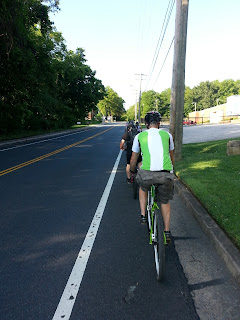 Our first stop was NoDa Brewing Company, where we enjoyed some good local beer and socializing.  Eventually we rolled up the street to Smelly Cat Coffee, where we proceeded to hang out again for way too long.  The theme for the evening seem to be more social, less riding.

After realizing that we’d been out for quite a while, the decision was made to cut the “ride” short and head back for $1 tacos.  Lunchbox wasn’t able to join us for the ride because he was out doing trail work with the local race promoter.  Luckily when we got back from our ride we found out that he had dropped my kid off at the restaurant so he could take a crack at breaking the record for most tacos consumed. 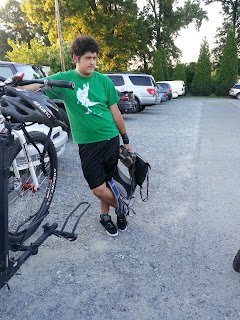 Unfortunately, the service was shitty and we were only able to eat fifteen each.  I won’t get into the horrible time we had there, but Eastwood summed it up pretty well yesterday.  My son was disappoint, but he knows that he could’ve beaten that record by a mile.

Anyway, back to the “changes.”  After only four dirt rides on the geared bike (including my Pisgah adventure) I’m ready to make my decision.  Why only four when I said five?  Well, mostly because I haven’t had a chance to properly clean all the grime out of the geared bike, and when I finally get to do it (tonight) I probably won’t have time to ride it again.  I also have to get my single speed ready for this weekend, and I’m not giving up the single speed for the sake of “testing” my geared bike.

I basically learned all I need to know this past Sunday, and my announcement with be forthcoming.  But it won’t be today.  I’m kind of waiting for something to show up at the B-43 Worldwide Headquarters, and that will probably be when I make my announcement.

Until then I’ll find other shit to talk about.

Which will also be tomorrow.
Posted by TheMutt at 8:18 AM