No, Little Miss Sunshine is still around. In fact she went on her own little bicycling adventure last night. It was a girls-only road ride, so Lunchbox and I were free for the evening. We decided to head out on our own adventure to the ever-so-fun Sherman Branch. It’s the next closest trail to me (besides Poplar Tent, but I couldn’t get Lunchbox to go there.) Anyway, when we arrived, the parking lot was pretty full. Well, at least I thought it was full for a Thursday night. However, Lunchbox politely informed me that mountain bikers have jobs during the day, and I concurred. Hell, bike shit is expensive, so we have to work to pay for it. I looked around for anyone I might know that would want to join us: 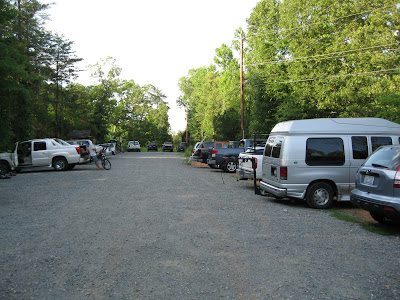 I saw a lot of people, but no one I knew. No problem since this ride would be a Lunchbox’s pace anyway. This is the part where the title above comes in: we both would attempt to ride the whole trail in one gear, a.k.a single speed. We got ourselves and our bikes ready for the journey into the woods. Riding single speed was something I decided to do before we embarked on this particular ride, but Lunchbox had also decided the same thing (unbeknownst to me.) We didn’t really discuss it until we were out on the trail though, when I noticed that he wasn’t shifting, and also standing on the climbs. I asked, “Are you trying to be a singlespeeder?” He said yeah, and told me it was his way of training. Since he isn’t old enough to drink beer, this is an acceptable form of training for the only junior rider on the B-43 team. I noticed that we were both riding 32-18, which is (I think) the standard gearing around here for singlespeeding. It was fun, I tell ya.


As we hit the roller coaster loop, Lunchbox was pretty much stuck to my back wheel, even on the climbs. I wasn’t flying through the trail, but I was keeping a pretty quick pace. We only stopped a few times, and that was because I noticed that my back tire was rubbing on the frame. I eventually found that I had about five loose spokes, but I couldn’t do anything about it until I got back to the B-43 shop. I would finish the ride wondering if I would even finish the ride due to a mechanical issue. It looks like my mechanic has been drinking too much beer again. I’ll have a talk with him.


The ride was really fun, and my wheel somehow decided to stay in one piece and even in the same shape as I started (it just wobbled when I stood up to climb.) I took every drop, jump, and obstacle in my path, figuring that if something happened, I wouldn’t have been able to prevent it anyway. We were there to have fun, and the pictures below can prove it. 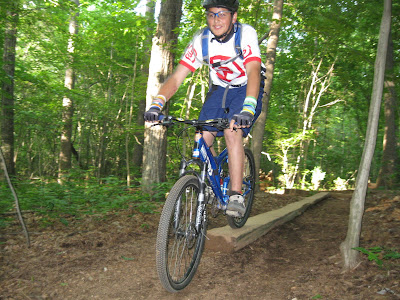 Lunchbox was smiling because he made it to the end. 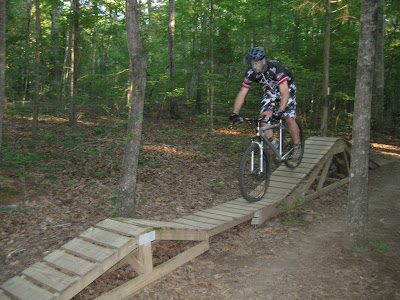 I love that thing, whatever the hell it’s called.

Yes, our after school/work ride was a success. I identified a minor issue that could have been catastrophic, and that gave me plenty of time to correct it before the 2010 Catawba Riverfront Classic coming up this Sunday. In fact, I tightened the loose spokes as soon as we got back to the shop, and my wheel is pretty close to as good as new. Of course, I enjoyed a nice hoppy beverage while I did it. What was that I was saying about my mechanic drinking too much beer?


There is yet another chance of rain for both days this weekend, so I’m hoping that this Sunday’s race will still happen. I know, you Florida boys down there have no choice but to ride in the rain sometimes, but things are different up here in North Cackalacky. As a former resident of the Sunshine State myself, I rode mountain bikes in the rain (and lightning) plenty of times, but they are a little more protective of the trails around here. That’s a good thing, because the shit up here blows away pretty much anything you will find in sunny (and rainy) Florida. See y’all Monday with a race report (hopefully.)
Posted by TheMutt at 8:28 AM