Although I had a busy weekend full of two-wheeled goodness, it didn’t start out that way. Even though I mentioned that I might head on over to the U.S. National Whitewater Center to ride a few laps on The Big O, my plans changed. I also told you I might take the mountain uni over to Sherman Branch, and that’s just what I did. 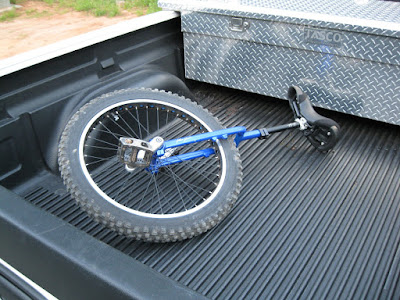 As I got ready to hit the trail, I got some pretty strange looks. People were staring like I was some kind of circus freak, which was understandable since I was about to go ride a unicycle. Maybe next time I’ll start juggling to complete the look. Anyway, I hopped on my one-wheel monster, made sure the trail was clear, and took off. This was gonna be so much fun.


I took off slowly, navigating the bumps, roots, and rocks with ease (at first.) It’s been a while since I’ve dedicated a whole ride to the uni, and I was quickly reminded of that after about five minutes on it. I was beat tired already, and my heart was racing like it does during the start of the Summer Series. This was gonna be a good workout, since I haven’t really had much uni-practice over the winter.


I didn’t do too bad, keeping a decent pace and not falling off too much. Falls are commonplace (or at least they are with me), so I was happy to be moving along. I did stop quite a bit to catch my breath though; which gave me time to let the two-wheeled crowd pass me by. Most of the time they would give the usual statements, like “Hey, that looks crazy!” and other assorted unoriginal comments. I would usually reply back with, “Wanna race?” or “Hey, do you wanna try it?” No one took me up on my offer. Too bad.

I realize that this may not sound too interesting to the non-uni crowd, but I really enjoy it. The peace and tranquility I get riding on one wheel through the woods can’t be beat. It’s a great way to clear your head, not to mention the exceptional workout that goes with it. Riding a uni is probably three times harder than riding a bike on the same trail, so I thought that this might be a better way to wear my legs out. I was right. I’m still hurting from it, but it’s all good.


If you don’t ride a uni, then that’s too bad. If you like other bicycle crap and nonsense, then come back tomorrow to see what kind of “other” adventures I got into over the weekend. I’m sure you won’t be disappointed. Well, you might, but that can be fixed. Just lower your standards. It works for me.
Posted by TheMutt at 8:35 AM