The Grind Continued (Just For The Sake Of Dragging It Out)

With lap three in the books, I was fairly pleased. I knew for sure I could get in two more laps, so I actually started thinking about going for a total of six. I stopped in the pit area for the usual exchange, and made sure I ate enough food for the long haul. During Warrior Creek, I didn’t eat nearly enough, so I was at least doing better in that aspect this time. I rested a little longer though, just to make sure I would have enough energy to continue. Total pit time after lap three: twelve minutes. I saw Doug cross the start/finish line, but he appeared to be heading for the bathroom or something. I took off again, and saw Lunchbox waiting with the camera: 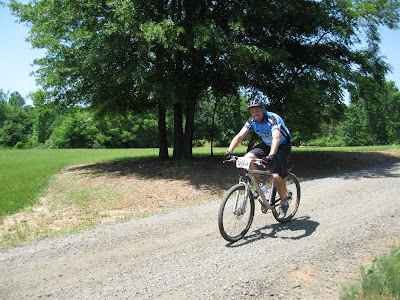 Yep, I was really smiling. Three laps, twenty-eight and a half miles, and I felt good. I big-ringed it down the gravel road and got ready to tear it up for lap four. As soon as I got in the trail, I clipped another tree. Shit. This time it was my right leg, but it didn’t really faze me. I was worried that I was making dumb mistakes out there, and they would get worse. Luckily though, I didn’t hit anymore trees on that lap. I started to feel a little tired about halfway through, so I popped a couple gel shots and dug in. I still had plenty of time, so I backed off a bit to regain some of my focus.


When I finished lap number four, I actually felt like I had accomplished something. All I had to do was one more lap to meet my goal, but I had time to do two more if I planned it right. I headed for the pit area and sat down. After wiping my head with a cold towel and drinking some water, I loaded up my pockets with more food. I ate another sandwich and grabbed only water this time for the trail. I was starting to get a little sick of the Cytomax. You can only drink so much of that shit I guess. I headed back out for lap five feeling okay. It was around 3:30, so I had to hurry if I wanted to get in two more. Total pit time: sixteen minutes. Shit, too long.

Lap five would prove to be interesting. I managed to avoid cramping for the most part, but I knew it was coming. Every time I stood up for a climb, I felt a little fatigue in my legs. I shifted to a lower gear and tried my best to spin on the climbs for there on out. I bombed the downhills with reckless abandon, and at one point I nearly rode into the river. The stupid mistakes returned, capped off by another tree incident. Five laps so far, five trees touched by my extremities. It was so ridiculous that I had to laugh, even though a few of them hurt a little.


Lap five would prove to be too much for me. My slower climbing had pushed me over the edge as far as having enough time for six laps, but at least I would make my goal. At one point I even rode the wheel of one of the super fast guys for about two minutes. I don’t know where the hell that shit came from, but it was fun while it lasted.


When I heard the now familiar sounds of the crowd at the finish line, I fought my way through the fatigue and climbed out of the trail. I crossed the finish line at five hours, fifty-one minutes with a total of 47.5 miles. I met my goal, and I didn’t feel even close to as bad as I did when I finished Warrior Creek. By the way, Doug didn’t go out for a fifth lap, so I met my secondary goal as well. Maybe there is something to this whole 29er thing, or else I am actually getting better as the “season” goes on.


We tore down the pit area, enjoyed some fine frosty beverages, and headed home. Another endurance race in the books, and I really enjoyed it. I ended up in 22nd place out of 31 riders in my class, so there were a few people out there that sucked worse than me. My Awesome Strap held on tight, and luckily I didn’t have to dig into it for anything. No mechanicals, serious crashes, or even a flat tire. It was a fine day indeed. I think I’m really starting to like this endurance racing stuff.
Posted by TheMutt at 8:11 AM

Email ThisBlogThis!Share to TwitterShare to FacebookShare to Pinterest
Labels: cramping, Endurance racing, Grind On The Greenway

Hi there....thanks to Crank I was able to discover your blog. Nice to see it. Now that I've got it on my radar I'll be sure to check in regularly.

Keep up the great riding and writting.

Glad I found your blog. Nice post Chris. Thanks for letting me hole up in your tent. As a first endurance race for me I learned 2 important lessons: Eat MUCH more and take a longer break that 2 mins per lap. My body gave out on me after lap 31/2 and the last 4 miles or so were complete agony and completed on sheer will alone.

Thanks for reading, Doug. You did great out there, but it definitely a learning experience. See you at the next one!

I don't know what Crank is, but thanks for reading. Hopefully you were mildly entertained.