Bringing Up The Rear

Since I jumped up to the next class in the Summer Series this year, I’ve really been struggling. Sure, I usually race my way into shape during the season, but I guess I’m still a little bit disappointed in my performance thus far. My new “classmates” aren’t really any faster than me, but they can maintain that speed for the entire race. I’m usually falling off about halfway through the first lap most of the time. I gotta figure out a way to maintain my speed during the entire race. Don’t get me wrong, I’m not a serious racer boi by any means, but I would like to be at least a little bit competitive. Maybe it’s the shorts. Damn.


Anyway, last night’s race was more of the usual, with the exception of the start. We raced at North Meck, a rooty and twisty trail in Huntersville, NC. The trail is only 3.5 miles long, so that meant that I would have to do four laps. I actually got there early enough last night to get in a warm-up lap, so I felt pretty good before the start. Since the trail is so short, we had to line up our bikes in a field on the other side of the parking lot, run about 100 yards to get to them, and hit the trail. This crazy Lemans-style start was supposed to spread us out on the trail, and I guess it worked for the most part.


I sprinted for my bike, hopped on, and hit the trail in about 9th place. I pushed and pushed to hang with the faster guys, but as usual, I fell off about two miles in. I felt okay, but I just couldn’t maintain my pace. Still though, I pushed as hard as I could, hoping that I hadn’t fallen to last place. Just then, I noticed one of the guys from the Skeleton Crew race team was in hot pursuit. I had no idea if he was in last place, but I wasn’t about to let one more rider in my own class get by me. It would be a duel for four laps, because this guy just wouldn’t quit.


There isn’t any kind of rivalry with the guys from the Skeleton Crew, other than a friendly one I guess. Still, I found myself pushing hard to get away from him, and it worked for the most part. I would lose him for a while, then back off. All of a sudden, he would appear out of nowhere. It continued like this up until the final lap, when he started closing in. Shit. Would he catch me? Did I have enough to leave him in the dust? I decided that it was now or never at this point. There were plenty of places to pass, so I had to leave him for good this time. He could easily catch me if I didn’t. On one of the downhill sections, I shifted into the big ring and mashed away. I was hoping that my weight, the big wheels of The Big O, and the high gear would be enough to lose him.


Well, I guess it worked. I took off like a bat out of hell, and I never saw him again until the race was over. He later told me that he was trying his hardest to keep up (that was obvious), but that he just didn’t have enough in the end to catch me. I don’t know exactly where we finished, since I never bothered to check the results. I’m not sure if anyone in our class finished behind us, but it was fun to battle it out for the race. It was the closest I’ve had to any kind of competition during the series so far. So, I guess we’ll be duking it out for last place for the rest of the series. Should be fun.

This just in. An unfamiliar bike was spotted with the B-43 logo in the race series. 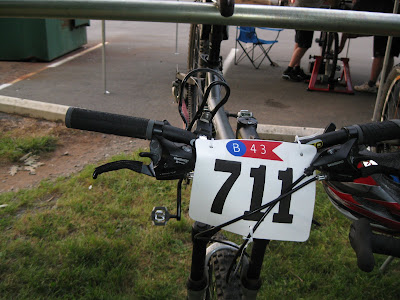 Yes, that’s right. Another member of the B-43 team joined the ranks of competitiveness. Little Miss Sunshine finally decided to give racing a try. She entered in the Beginner Women’s category, with a field of five women. After a hard fought battle, she pulled out a well-deserved 3rd place finish. She was all smiles when she was awarded her medal. 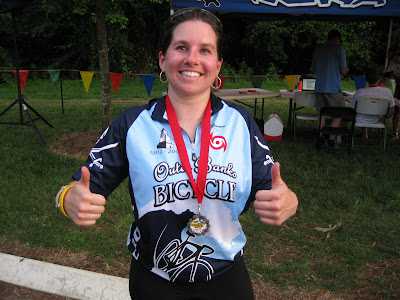 Lunchbox also raced last night, although his performance was a bit more like mine. He doesn’t really ride to win, but he has a good time out there. The kids in his class are mostly sandbaggers anyway, with the top two or so being sponsored by “real” teams. Still, it’s good to see him get out on the trail to race. He tried to have a little soundtrack while he raced, but he had a few technical difficulties. Lunchbox is all about the style, I guess. 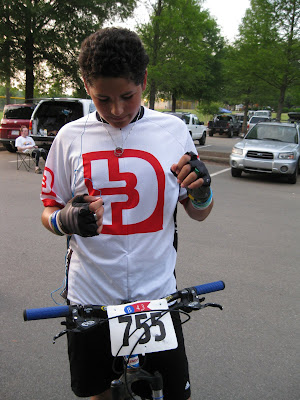 It’s nice to see the whole B-43 family/team out in force. Now, if we could just get the Dirty Party Cycle out here too. He hasn’t been around here in a while, so it may take some convincing. Also, Mr. Shepherd and Senor Oeste would both love this shit, but they are 600 miles away, representing B-43 South. Some team, huh? We really gotta get our shit together. Nah, that would make us too serious. Being serious kinda sucks, so just go have fun on your bike.
Posted by TheMutt at 8:48 AM

Email ThisBlogThis!Share to TwitterShare to FacebookShare to Pinterest
Labels: B-43, Competitive, racing