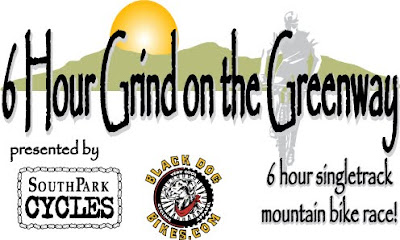 So yeah, this past Saturday was the 6 Hour Grind On The Greenway in Fort Mill, South Carolina. I survived, obviously, since I’m here talking about it. It’s safe to say that my second solo endurance race went pretty well. My goal was to complete five laps on the nine and a half mile course, which I felt was a lofty one since I struggled mightily at the 6 Hours of Warrior Creek last month. I’m new to this whole endurance racing thing, but I kinda felt like I’ve learned a few things since the last one.


The day started out sort of early, with me packing up the usual crap. The Big O: check. Cooler full of food: check. Tools: check. Tent and chairs: check. Cooler full of tasty beer: double check. Can’t forget the beer, right? Anyway, I got everything set up, listened to the pre-race briefing, and I was ready to “race.” I had no idea if I could last six hours out there on the trail, but I was gonna give it my best. At eleven o’clock sharp, the race started. I took off with the pack, and settled in at my usual position near the middle. 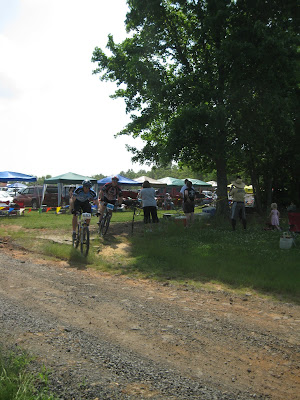 It was pretty much a logjam most of the first lap, so I hung in there and kept up my speed. Even though I was trying to pace myself for five laps, once again I got caught up in the “racing” aspect of it all. Damn it. I felt fine though, so I kept it up. The trail was in great condition, and it was super fast. The fact that I was riding big wheels this time made it that much easier too, what with the abundance of roots and rocks on the trail. I did however, clip a tree with my shoulder on a descent, but it didn’t disrupt my flow too much.


When I completed the first lap, I wasn’t even breathing hard (a first for me.) I felt great actually, and my time wasn’t too bad either. I came in at just under an hour, so I headed over to my pit area for a water bottle exchange and quick chow down of food. My buddy Doug (from last year’s summer series battles) was sharing the pit with me, but he hadn’t made it back yet. I actually thought he was ahead of me, until Lunchbox told me the news. I grabbed a full bottle of Cytomax for the bike, and drank about half of a bottle of cold water. After shoveling in a sandwich and a couple of Fig Newtons, I was ready to go again. Total time in the pit: four minutes. Not too shabby.


I hit the fire road that led to the singletrack at full speed, hoping to get in a better lap time for round two. I felt so good that I didn’t even think about the trail as I rode it, instead relying mostly on my instincts and awesomeness to get me through. I was actually surprised at how fast I was going, especially since I was trying to pace myself. I would pass a few people here and there, and a few people would pass me. I kept up my speed, but once again I clipped a tree (with the opposite shoulder this time.) So far I had hit two trees. I was batting a thousand. I started to get a bad feeling, but I kept up my crazy (for me) pace.


When I came up to the start/finish line again, I still felt pretty awesome. Two laps for a total of nineteen miles. Another hour or so lap, and I was a third of the way finished. I decided that I would take a little bit longer break this time, just to make sure I could get in three more laps. I ate a shitload of food this time, and grabbed another bottle of Cytomax to go. Lunchbox told me that Doug had asked where I was, and he seemed hellbent on catching me. I was just about to hop back on my bike when I saw him come up to the tent. I said, “See ya later Doug,” and I left. Total pit time after lap two: nine minutes.


I took off at the usually blazing fast speed on the fireroad, since I wanted to make sure I got a good lead on Doug. Even though I was out there to see what I could do, I also made a new goal: to beat Doug. If anything, it would give me a reason to push harder. I knew I had enough time to complete my goal of five laps, but I had to keep my body fueled up to keep from cramping. This weighed heavily on me, but I kept up the pace.


Lap three was just as fun as the first two, but I was starting to get a little tired on some of the climbs. Also, I was afraid to push too hard since I could jeopardize my chances of being cramp-free and meeting my goal of five laps. Luckily, my big wheels kept me moving fast through the downhill and flat sections to make up for my slower climbs. I couldn’t let up though, since I thought that Doug would overtake me at any moment. I was a little careless though, and whacked yet another tree, this time with my forearm. Ouch. I didn’t crash, but it did force me stop for a moment. I gathered myself and continued. I could hear the music and crowd noises now, so I knew I was almost finished.


Three laps in the books, and I was having a great time. Would I meet my goal of five laps, or crash and burn as usual? Tune in tomorrow for the rest of the “race” report. There was just too much shit to talk about for one blog post. Besides, I wouldn’t want to bore you to death in one sitting. I’ll spread it out over two days to make the pain last that much longer.
Posted by TheMutt at 8:15 AM

Email ThisBlogThis!Share to TwitterShare to FacebookShare to Pinterest
Labels: Awesome, cramping, Grind On The Greenway

You know, instead of reading this 2nd rate blog, I could look at the results to see if you beat Doug. But I am not going to as I want to see how this pans out.

2nd rate? Well, thanks for the compliment! You'll get there one day too. :)