It’s Been Raining, So What Does That Mean For Racing? 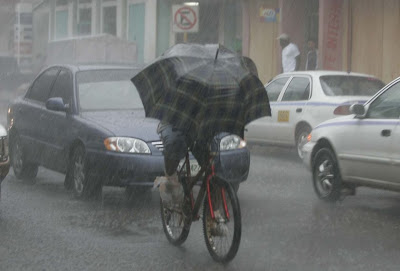 Last night’s race was pretty good for me. Why, you ask? Well, since I’m still feeling a little ill, it was good because it was cancelled. Yep, with all the rain we had around here, the trails at the U.S. National Whitewater Center were closed. This meant no race, which meant no trying to kill myself out there while trying to recover from whatever the hell bug I contracted. I guess it was a good thing we didn’t race there, since the trails were probably in horrible shape anyway, and the promoter was probably afraid of this happening: 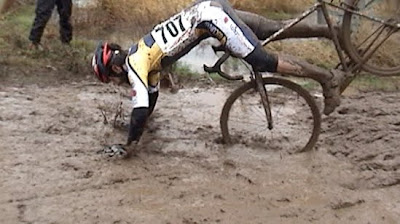 So, what the hell do I do now? Do I stop riding for a while and hope that I can still do well in the 2010 Catawba Riverfront Classic this Sunday? No way. I’ll ride, even though I’m not currently feeling up to it. Also, since I mentioned da udda day that the XTERRA Whitewater is fast approaching, I need to make sure that I am “training” properly. If you thought that the team here at B-43 just drinks beer to get ready for big events, then you would be partially correct. There is other stuff involved, although the beer is the best part (but least productive.)


I went to the pool again yesterday and cranked out another half mile swim. I actually felt pretty good, despite my sudden illness. The swim portion of these triathlons are my weakness, so I’m trying to build up my confidence so that I will perform swimmingly during that leg of the event. I’m really not too worried about the bike, since I will be racing weekly (or weakly) up until the XTERRA. I’m actually hoping that a lot of out-of-towners show up for the XTERRA, since that would give me a home-trail advantage. That actually worked out pretty well for me last year when I did the Recon Off-Road Tri. Even though I got kicked in the junk during the swim, I managed to blow up the bike course on my way to a third place finish. I earned that spot on the podium, and I hope to do the same in the XTERRA Whitewater. Look out Clydesdale class, here I come.


In other news, none of the shit I’ve been waiting on has arrived at the B-43 Worldwide Headquarters yet. Even though I left some milk and cookies for the nice UPS man, I haven’t seen hide nor hair of him. I’m not being impatient mind you, but I just really like getting stuff sent to me. I once tried boxing up some of my own bike parts, placing them at the front door, and acting surprised. That shit didn't work. I’m no fool, I guess. Well, maybe I am for trying that, but I couldn’t fool myself. Damn it, now I’m confused. Well, maybe not as much as this guy: "There's an old saying in Tennessee — I know it's in Texas, probably in Tennessee — that says, fool me once, shame on — shame on you. Fool me — you can't get fooled again."
Posted by TheMutt at 8:06 AM

....and you do it dodgin' lightning bolts the entire time.

Yeah, those days are long gone for me. They have strict rules around here for riding wet trails. The last time I rode in a storm was when I was down there last year. So much fun too.