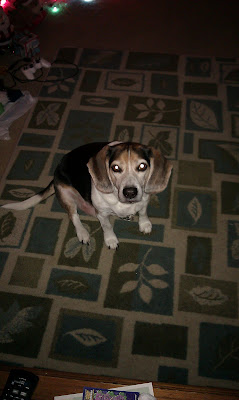 Christmas was here before I knew it, and gone just as fast. The days leading up to the holiday gift exchange are always exciting, but not because I think I’m getting a whole bunch of new shit. The reality is, I like buying presents for other people. I’m always making my list, checking it twice, and not giving a shit if they are naughty or nice (because I already spent the money.) The people on my gift giving list deserve it, and I’m happy to oblige. When I make a list for myself (so other people can get me stuff), I normally don’t expect much. I usually just cave into the pressure of others that want to buy me stuff, but I am happier doing the giving than I am the receiving. Since this is my blog though, I’ll talk about all the cool shit I got.


Of course my list included new bike stuff, and most of it consisted of upgrades for my singlespeed bike. Since I’m really enjoying the one-geared life now, I felt like it’s time to put some nicer parts on my “other” bike. After opening almost all of my presents (bike and non-bike related), I had one left. 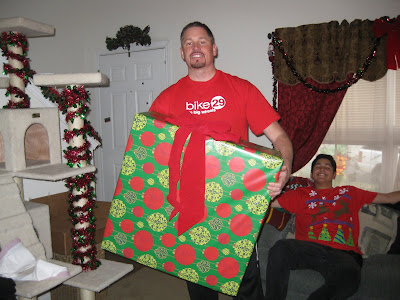 Lunchbox is smiling in the background because he knows something I don’t. Hmmmm.


When I opened the box, I was shocked to see what was inside. I learned that Little Miss Sunshine had been conspiring with George to make my Christmas pretty freaking awesome.

Look what was in the box: 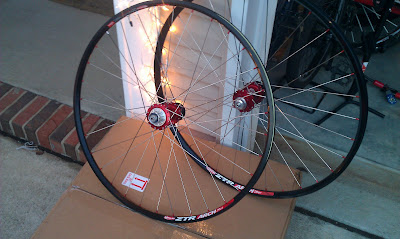 Holy shit. Another set of Bike29 wheels (red Industry Nine hubs laced to Stan’s Arch rims. This time though, they are of the singlespeed-specific variety for my one-geared riding pleasure. 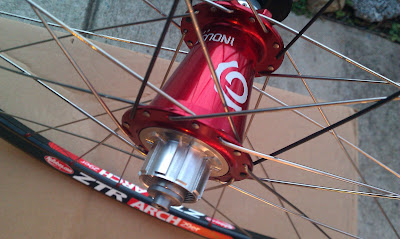 George went all creative (like the last time he built my wheels) and added a few personal touches. 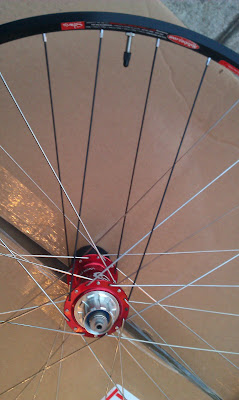 The wheels on my geared bike have all black spokes, with four white spokes making a “rally stripe” around the valve stem. These new singlespeed wheels have all silver spokes, with four black spokes. I guess the rally stripe is my new thing, and I have George to thank for giving me my new “style.” He even used different colored nipples on the spokes to set everything apart. 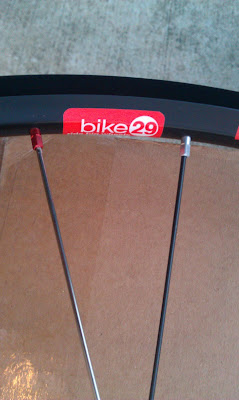 All I had to do now was put them on.

I spent most of Monday installing new bike parts, which included my new wheels. I installed a new 18 tooth cog and spacers: 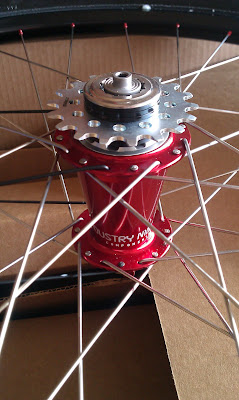 After mounting up my tires (which was way too easy), I put everything on the bike. And just like that I was ready to roll. 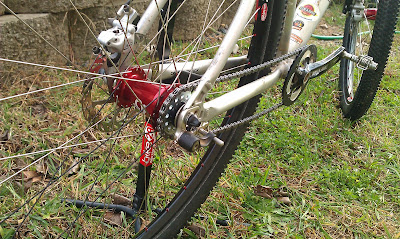 Wow, just wow. I am really happy to have such awesome wheels, and I am thankful that Little Miss Sunshine thought to get these for me. She is pretty awesome for sure. Big thanks to George too, because he worked his ass off to build these and ship them out lickity split (in time for Christmas.) Little Miss Sunshine told me he was pretty happy to have the opportunity to build another set of wheels for me too. He likes being creative, and he will build you a set too. Just don’t ask for the rally stripe, because that’s my thing, bitches.


I’ll be back tomorrow with more Christmas recap action, including something pretty cool that Lunchbox got for me.
Posted by TheMutt at 8:21 AM

very sweet wheels!! I'm thinking of going with the Arch for next season.