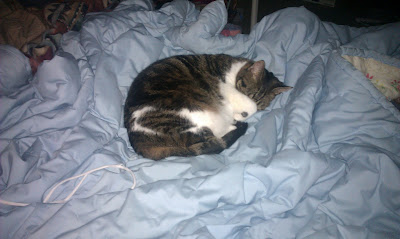 When I woke up da udda morning I found myself with some free time. Free time around here doesn’t mean sitting around drinking beer (okay, it does.) It was early in the morning, and I had a few things to do around my house. While I was out front, The Chili Man rolled up on his fancy new 29er and asked if I was working on “The Trail.” He meant the secret neighborhood trail I’ve been working on the last few weeks, no doubt.


I hadn’t had a chance to tell him about it, but he does read the blog. Since he lives a few houses away from me, it wasn’t hard for him to figure out where it was. He volunteered to join me for some trail work, which I was planning to do anyway. We grabbed our tools and set out for some diggin’.


This was my third week in a row out there, and things are coming along nicely. We are now on phase three (which was initially supposed to be phase two by the way.) Phase three is a long section with a slight downhill, and it was actually the first spot I saw on this piece of land that made me want to build trail there in the first place. Lunchbox and I had set aside some logs which would later turn into trail features, since I’ve had a vision of what this section should look like for quite some time now.


I cleared the corridor and flagged out some trail, and The Chili Man got busy harvesting dirt for a couple of jumps. He dug for a long time, which gave me an opportunity to cut the whole section I had been dreaming about. When I finished, I help pile the dirt over some log piles to make the jumps. The Chili Man did most of that backbreaking work, but I did contribute a little.


Here’s what we’ve done so far: 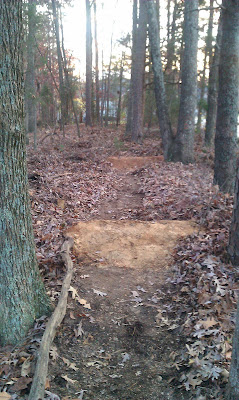 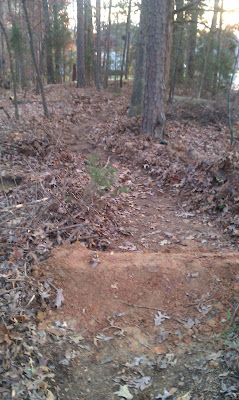 This section is pretty smooth, and it looks like you can get a lot of speed. The jump at the beginning was built on a drop off, so you get sent flying down the trail into the next jump. After that the trail winds around the outside of the property, and will eventually circle back into the middle of the property. I had to stop there, because that shit took a long time.


I’m looking forward to phase four of the build, because there is a nice valley in the middle of the woods. The plan is to wind back and forth through it, making good use of the natural elevation changes. We have a few more ideas for features, but I’ll probably hold off on building those until we get a good bit more trail cut. So far so good though.


I really appreciate the help of The Chili Man. We took a test ride out there, and he got a chance to see how much his hard work paid off. It’s really satisfying to ride a trail that you worked on, so I’m sure he’ll be back for many more workdays. Since it’s so close to where we live, I can’t see a reason why we won’t get it done soon.


In other news, George sent me a present for my birthday a while back. Well, since it showed up a few days before my birthday, I will assume that it was a present for such occasion. I am obviously Bike 29's most favorite team rider. 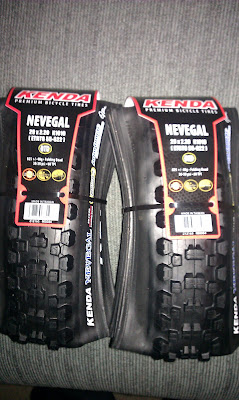 
This “offseason”, I thought I might need some knobbier tires for when the conditions around here get shitty. I rode the Kenda Nevegal back when I first jumped into the 29er “fad.” I found them slow and heavy, but they did grip like a monkey on a coconut tree. I decided that I would go with them again to help my “training.” Since they are a bit heavy (compared to the Slant Six I currently ride), it could help me get a little stronger over the next few months. Plus, I won’t be all sliding around in the muck when I ride in less than perfect conditions. I haven’t had a chance to put them on, so hopefully I can get to it this weekend.


Sounds like I have a lot of shit coming up, but that’s not really the case. Hell, I haven’t even mentioned actually riding my bike. I probably will, but I haven’t decided when and where just yet. I guess you’ll find out Monday.
Posted by TheMutt at 8:21 AM